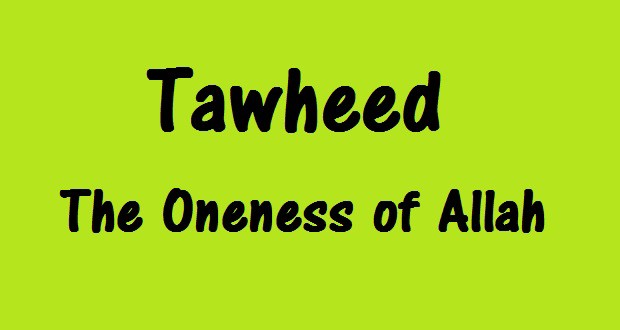 All forms of worship, whether they be prayers, obligatory or optional; fasts, obligatory or optional, giving charity, umrah and hajj and every type of worship will only be accepted up until your Aqeedah (belief) is sound and correct. If your belief is incorrect you will not benefit from any of these actions no matter how long you have been practising them for. If someone believes in shirk and at the same time believes Allaah is the creator, the owner and sustainer of the universe but yet due to his shirk he still worships others besides Allaah, then all of his actions will not be accepted.

If someone asks holy saints for help, seeks intercession through the dead, asks the Prophets and Angels for help and seeks assistance from them, supplicates to them and other holy people, pleas to them, asks such entities to remove his or her calamity, going to graves and asking them for help, or goes to a darbar, shrine or tomb and makes dua to them then all of this is committing shirk with Allaah and the greatest crime and sin anyone could ever commit. All of these actions will nullify all of your good deeds no matter how long you have been doing them for and you will have no benefit of any of your actions from your prayers, fasting, Salah, hajj, umrah, dua, Dhikr, sadaqah, sacrifices, nothing will be left of any of your actions.

These actions will only be accepted and will benefit you when your Aqeedah is correct. The basis of Aqeedah revolves around 2 aspects the first being to believe in Allaah and declaring that He alone is worthy to be worshipped, without associating any false deities with him.

You must remember no action will ever be accepted if your Aqeedah is incorrect and not only will you be wasting your actions of worship but you will also be wasting all that time you exerted into your worship, all the wealth spent for the sake of Allaah as well as all the good deeds ever done in your life time.

Imagine on the day of judgement after all your years of worship and all the effort you exerted in your Ibadah and your righteous actions, you are informed that you have nothing to show by the way of actions after a lifetime of worship, how hard done by will you feel.

The example of Aqeedah is like a foundation so no matter how big or tall the structure or building is, if it’s foundation are not correct then the building will also be weak and unstable and it will eventually fall. Similarly in the same way no matter how high a structure you create pertaining to worship but if your Aqeedah is not correct then there is no benefit of the worship you have done, not in this world and nor in the hereafter. This is what Allaah the most high said after mentioning the prophets whilst addressing them,

“Bit if they had associated others with Allaah, then worthless for them would be whatever they were doing.” (Soorah al-An’aam 6:88)

So Allaah is saying that even if the prophets like Ibraaheem the friend of Allaah, Ismaa’eel the one sacrificed for Allaah, Moosaa the one who spoke to Allaah or Eesaa the spirit of Allaah committed shirk then even all of their actions would be wasted and end in vain.

In the same way Allaah addressed Muhammad (Sallalahu Alayhee Wasallam) and said to him,

“And it was already revealed to you and to those before you that if you should associate [anything] with Allah , your work would surely become worthless, and you would surely be among the losers.” (Soorah az-Zumar 39:65)

So here Allaah is warning Muhammad (Sallalahu Alayhee Wasallam) that even if he committed shirk his actions would be wasted. So after Allaah warned all the prophets including Muhammad (Sallalahu Alayhee Wasallam), then what status do we have. This shows the seriousness of this reprimand and highlights no matter who the person is, a prophet, a holy soofee saint, a Walee or an Imaam anyone who commits shirk will have all of his actions and worship all wasted.

When we talk about certain people being engrossed in aspects of shirk like seeking help from people in the graves, using the deceased as intermediateries or sacrificing food in the name of other than Allaah like Abdul Qaadir Jeelaanee or Alee (RadhiAllaahu Anhu) and the general people say about them, “even though they do these things they still pray and fast.” Then we say there is no benefit of them praying or fasting as the one who commits shirk will have all of his actions and the reward wiped away.

The polytheists of Makkah and Abu Jahl used to fast, pray and perform pilgrimage of the house of Allaah, they would give charity. They lived around the Ka’abah and were even custodians and guardians of the Ka’abah but Allaah said none of their actions will benefit them due to shirk and their abode will be the hellfire. Allaah the most high said,

“And their refuge is Hell, and wretched is the destination.” (Soorah at-Taubah 9:73)

So for any action to be accepted Allaah alone is to be worshipped without associating partners with him.

Everyone claims to be upon this and maybe they are but only in terms of it’s wording, however with regards to understanding and acting upon it, it’s a different story. People who have not fully understood this point have made their own little groups, sects and parties and this is what they follow. When the statement of the Messenger of Allaah (Sallalahu Alayhee Wasallam) comes to them they say, “but our Imaam said this or our peer (holy saint) said this and our Maulana said something different, how can they be wrong? Are you saying they never had knowledge? Etc” However the people of Hadeeth and Ahlus Sunnah say when the Messenger of Allaah (Sallalahu Alayhee Wasallam) statements comes to us we reject and abandon everything else and just follow and obey his words.

The reality is all the Prophets and Messengers Allaah sent to mankind from amongst the different nations all informed their respective nations to abandon the worship of everything and worship one Allaah alone without any partners. However the people would say we do not deny what you say but we never found our forefathers doing this and so were they wrong in what they taught us? So are you truthful and our forefathers liars. Allaah the most high said,

“And when it is said to them, “Come to what Allah has revealed and to the Messenger,” they say, “Sufficient for us is that upon which we found our fathers.” Even though their fathers knew nothing, nor were they guided?” (Soorah al-Ma’idah 5:104)

Today in our time the greatest excuse and the major obstacle is exactly this excuse with regards to the destruction and misguidance of this great Ummah. How does shaytaan misguide man! So they say the Hadeeth is wrong or incorrect but our Imaams and Moulvees/Maulanas/Sidis/Peer/Shaikh are correct in what they say and they can’t make mistakes, they are so learned and they studied with so and so and they have this many ijazahs (permission to narrate). So they all claim to love and follow the Messenger of Allaah (Sallalahu Alayhee Wasallam) but in actions and understanding they really don’t.