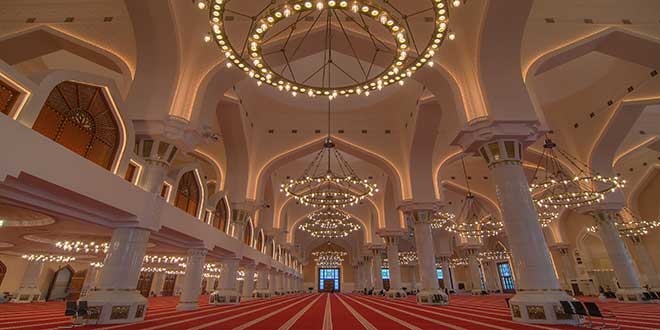 The Virtue Of Iman and Taqwa

When the Islamic Qiblah changed from Jerusalem to the Kabah, the Muslims showed great rejoice and happiness. Then the following verse was revealed, It is not Al-Birr (piety, righteousness) that you turn your faces towards east and or west; but Al-Birr is (the quality of) the one who believes in Allah…”  and to have belief in the aforementioned aspects mentioned in the verse.

Allaah said they are the people who are truthful in their faith and because their statements and actions affirmed their belief in their hearts. They proved they would not change irrespective of the circumstances relating to fear and terror. This verse further shows the people who are not attributed with this attributes cannot be truthful in their claims of having Eemaan. Allaah The Most High said,

“It is not Al-Birr (piety, righteousness) that you turn your faces towards east and or west; but Al-Birr is (the quality of) the one who believes in Allah, the Last Day, the Angels, the Book, the Prophets and gives his wealth, in spite of love for it, to the kinsfolk, to the orphans, and to Al-Masakin (the poor), and to the wayfarer, and to those who ask, and to set slaves free, performs As-Salat (Iqamat-as-Salat), and gives the Zakat, and who fulfill their covenant when they make it, and who are As-Sabirin (the patient ones, etc.) in extreme poverty and ailment (disease) and at the time of fighting (during the battles). Such are the people of the truth and they are Al-Muttaqun (Soorah al-Baqarah 2:177)

The person who believes in Allaah and the last day, fears his punishment and torment, accepts his commands and orders, stays away from that which has been prohibited and acknowledges his punishments then Allaah will make a way out from the punishment. He will be provided sustenance which he never envisaged.

“…That is instructed to whoever should believe in Allah and the Last day. And whoever fears Allah – He will make for him a way out. And will provide for him from where he does not expect…” (Soorah at-Talaaq 65:2-3)

Allaah The Most High sent Nooh (Alayhis-Salaam) to his nation as a mercy to them and instructed him to propagate the message of Tawheed to his nation. He informed them to abandon shirk and if they didn’t they would face a great punishment and torment from Allaah The Most powerful.

So Nooh (Alayhis-Salaam) followed Allaahs orders immediately and informed his nation that he was sent by Allaah to warn them of his punishments and to clearly and totally clarify what shirk and kufr was. He told them his call was worship the one true deity and not to associate any partners with him and fearing him at all times. He also informed them to follow his commands and prohibitions as they were from Allaah because he was Allaahs Messenger.

He told them Allaah would forgive their sins if they accepted his call and would let them live till their appointed time.

“He said, “O my people, indeed I am to you a clear warner, [Saying], ‘Worship Allah , fear Him and obey me. Allah will forgive you of your sins and delay you for a specified term. Indeed, the time [set by] Allah, when it comes, will not be delayed, if you only knew.” (Soorah an-Nooh 71:2-4)

Mankind are all the children of Adam (Alayhis-Salam) and Hawaa and so they are all equal. So those from amongst them who have more taqwaa or who obey and follow their respective Messengers will indeed have a great and high rank with Allaah. Allaah The Most High said,

“O mankind, indeed We have created you from male and female and made you peoples and tribes that you may know one another. Indeed, the most noble of you in the sight of Allah is the most righteous of you. Indeed, Allah is Knowing and Acquainted.” (Soorah al-Hujuraat 49:13)

Imaam Muslim narrates from Abu Hurairah (RadhiAllaahu Anhu) the Messenger of Allaah (Sallalaahu Alayhee Was-Sallam) said, “Verily Allaah does not look to your bodies nor to your faces but He looks to your hearts and actions.” (Saheeh Muslim no.6543)

“And the worldly life is not but amusement and diversion; but the home of the Hereafter is best for those who fear Allah, so will you not reason? (Soorah al-An’aam 6:32)

A person should always have a link with Allaah in terms of his worship, fear him and his punishment. They should also mention his grandeur and loftiness and this should always remain the centre of attention of their mind and soul. Hence Allaah the Most High said,

“O you who have believed, fear Allah as He should be feared and do not die except as Muslims [in submission to Him].” (Soorah Al’e-Imraan 3:102)

Allaah further said to fear him as much you can according to your capability and to continue acting upon his commands. He further said to spend wealth in his way from what he has given you and there is goodness in this. Also know the people who will achieve success and salvation in the hereafter are those who spend in the way of Allaah from their wealth and they are not miserly or greedy. Hence Allaah The Most High said,

“So fear Allah as much as you are able and listen and obey and spend [in the way of Allah]; it is better for your selves. And whoever is protected from the stinginess of his soul – it is those who will be the successful.” (Soorah at-Taghabun 64:16)

Allaah has informed the people in the aforementioned verses to have taqwaa, fear his punishment, and fulfill his necessary commands and orders and to abstain from unlawful acts.

Allaah also informed us that we should always speak the truth and based on the elements mentioned before Allaah will accept our actions and deeds. Similarly he will forgive our sins as our good deeds wipe out or bad deeds. He also gave glad tidings to those who follow Allaah and his Messengers commands and it is they who will achieve a great success. Allaah the most High said,

“O you who have believed, fear Allah and speak words of appropriate justice. He will [then] amend for you your deeds and forgive you your sins. And whoever obeys Allah and His Messenger has certainly attained a great attainment. (Soorah al-Ahzaab 33:70-71)

Allaah will put love and honour in the heart of the people for those who adopt taqwaa. Allaah The Most High said,

“O you who have believed, if you fear Allah, He will grant you a criterion and will remove from you your misdeeds and forgive you. And Allah is the possessor of great bounty. (Soorah al-Anfaal 8:29)

In another verse Allaah advised us to fear him openly and inwardly, to continuously work towards in making our hereafter better and to be aware that Allaah is looking at every action we do and its being recorded as nothing is hidden from his knowledge. Allaah The Most High said,

“O you who have believed, fear Allah. And let every soul look to what it has put forth for tomorrow – and fear Allah. Indeed, Allah is Acquainted with what you do. (Soorah al-Hashr 59:18)

Abdullaah Ibn Masood (RadhiAllaahu Anhu) said the Messenger of Allaah (Sallalaahu Alayhee Was-Sallam) would often supplicate, “O Allaah. I beg of you for the right guidance, safeguard against evils, chastity and freedom from want.” (Saheeh Muslim no. 6904)

A believer should always adopt actions of taqwaa and piety hence the Messenger of Allaah (Sallalaahu Alayhee Was-Sallam) said, “Whoever swears by something (ie to do) and then he sees something which has more piety in it then he should take that up instead.” (Saheeh Muslim no.4275)

Taqwaa takes a person to paradise so Abu Hurairah (RadhiAllaahu Anhu) said the Messenger of Allaah (Sallalaahu Alayhee Was-Sallam) was asked, “Which action will cause the people to enter Paradise the most? He replied, “Taqwaa and good manners.” He was then asked, “Which action will people to Hell the most?” He replied, “The mouth and the private part.” (Sunan Tirmidhee no.2004 Imaam al-Albaanee said the chain is Hasan.)

Having Taqwaa makes a person’s life easy and the doors of mercy are opened for him hence Allaah The Most High said,

“And whoever fears Allah – He will make for him of his matter ease. (Soorah at-Talaaq 65:4)