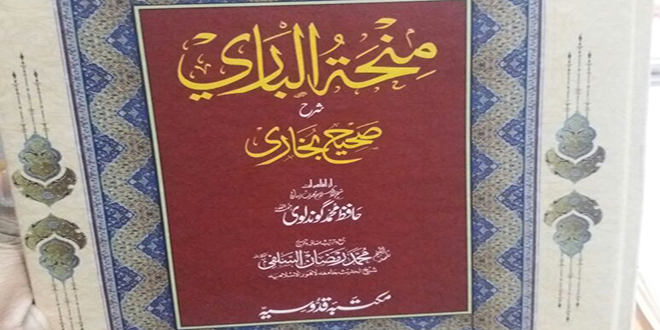 [This is an excerpt from the forthcoming Sharh of Bukhari by Shaikh Muhammad Ghondalwi (1405H), short passages are being presented for the avid reader]

Some foolish people think the prophetic hadith was written in the third islamic century and that written hadith did not exist before the advent of Imam Bukhari, ie before he compiled his book. They say the people heard these narrations from different places; centuries later after the Messenger of Allah  ﷺ and therefore hadith has no legal authority in islamic law and neither is it to be relied upon.

In reality these people are from the underlings of the rejectors of hadith who lack the mental capacity to comprehend the sciences of hadith and thats why they utter such ridiculous statements and views. The truth and fact of the matter is that numerous books were written and composed before the time of Imam Bukhari and his Sahih.

For instance the teacher of Imam Bukhari, Imam Ahmad bin Hanbal had collated and compiled his large work on hadith famously known as the Musnad. Imam al-Shafi’i who was the teacher of Imam Ahmad, wrote a book before his time and was considered an early work, famously known as Kitab al-Umm which contained many hadith. Some of the scholars took all of the hadith from Kitab al-Umm and compiled a separate work and called it Musnad al-Shafi’i.

Likewise and similarly, Imam Malik was the teacher of Imam al-Shafi’i who also compiled a book on hadith at a very early stage such that it became so famous even until today, which people know as Muwatta Imam Malik. We also had books composed by authors of that era which include the likes of the Musannaf of Imam Abd al-Razzaq and before that the Compendium of Mu’ammar. We also had the Compendium known as the Sahifah of Hummam ibn Munabbeh, who was the student of Abu Hurairah RadiAllahu Anhu.

The transmission of all of these ahadith traces back to the Messenger of Allah ﷺ. Therefore, those who say the ahadith were compiled in the third century by here-say and that they had no origin prior to this, is a clear evidence of the ignorance of the rejectors of hadith who are oblivious to the science of hadith.

Similarly the companion, Abdullah ibn Abbas RadiAllahu Anhuma would also write many hadith from the Messenger of Allah ﷺ. So much so that when he died his son, Ali bin Abdullah had to organise camel loads of his books and compendiums to them, which shows he had many books.

Likewise and similarly there were many companions who would write the ayat and also write the hadith of the Messenger of Allah ﷺ. Writing in those days was not a common thing (TN – This was because their norm was to memorise with precision) neither was writing formulated as it is in our times. They also did not utilise I’rab (i.e. Taskhil) or dots (on letters to distinguish) like we do in our times.

This Sharh is being Published by Maktabah Quddusia, Lahore, Pakistan)

[Sharh Muwatta Imam Malik – Shaikh Zubair Ali Zai] – Hadith No.154 –:– The Virtue Of The Area Which Is Between The House Of The Messenger Allah (Sallalahu Alayhi Wa Sallam) And The Minbar