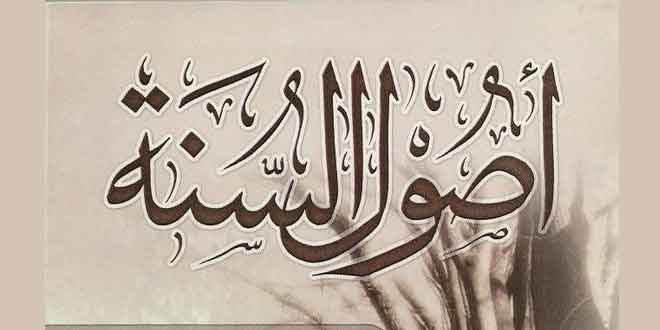 At the time of the Fitnah (trial and tribulations) of Qadr [1], Rafd, Ei’tizaal (Mutazilites), Irjaa (whether Eemaan does not increase or decrease) and Khalq al-Qur’aan (the Creation of the Qur’aan), Imaam Abul-Hasan Musadad ibn Masahid ibn Masarbil Asadee Basree (d. 228H) wrote to Ahmad ibn Hanbal to write concerning the issues from the Sunnah of the Messenger of Allaah (sal-Allaahu ‘alayhe wa sallam) and to send it to him. When this letter reached the Imaam he said whilst weeping :

To Allaah we belong and to him is our return, This Basree has spent enough wealth acquiring knowledge, yet the condition of his knowledge is that he could not acquire the Sunnah of the Messenger of Allaah (sal-Allaahu ‘alayhe wa sallam) regarding these issues.”

Then he wrote this Answer :

All praise is for Allaah who preserved the People of Knowledge [2] of every time who gave Da’wah of guidance to the misguided and stopped the destruction. They made the dead, living by the Book of Allaah and saved them via the Sunnah of Messenger of Allaah (sal-Allaahu ‘alayhe wa sallam). How many of them have they given life to, who the Shayaateen had killed, how many misguided have they guided. The result of their striving was a good favour on the Muslims. These people removed the Tahreef (distortion) of the Ghaalayn (Exaggerators) and the Ihtiaal of the Mubtalyn who were indulged in innovations and made Fitnah’s open and general and they made divisions after divisions upon the Book of Allaah. They placed Buhtaan’s (Great lies) on Allaah and raised numerous doubts concerning him. They talked about the Book of Allaah without knowledge. We seek refuge in Allaah from these misguided sects. May Allaah send salutations and Mercy upon his Prophet (sal-Allaahu ‘alayhe wa sallam).

May Allaah give us all the ability to achieve his pleasure and protect us from his punishment and that he takes us on the path of those who fear him and who have knowledge about him.

I command you people, do not give anything precedence over the Qur’aan. The Qur’aan is the Kalaam (Speech) of Allaah and the means by which Allaah made his Speech is not created and whatever is the Lauh al-Mahfooz (Preserved Tablet) is also uncreated. Whoever says it is created is a disbeliever and whoever does not declare them disbeliever’s, is also a disbeliever (After the proof is established).

After the Book of Allaah, the Sunnah of the Messenger of Allaah (Sallaalhu Alayhee Wasalam), Prophetic Ahadeeth and the saying of the companions and Taab’ieen have the next status. Salvation is in the following [5] (Ittibaa) and affirmation of the statements of the Anbiyaa and Rusul. These points have been continuously mentioned by the higher stature of the people of knowledge.

Beware of the ideas of Jahm Ibn Safwaan [6]. The sect of the Jahmiyyah according to our Scholars they are divided into three groups :-

1.      One group says the Qur’aan is the speech of Allaah and it is created.

2.      The second group says the Qur’aan is the speech of Allaah, and then remains silent whether it is created or uncreated. They are the Waaqafiyyah.

3.      The Third group says their words of recitation of the Qur’aan are created.

Then all of them are the Jahmiyyah and the Scholars are agreed that whoever says this and if does not repent from these sayings, then the slaughtered of his hand will not be Halaal and his decisions are not worthy of acceptance.

Eemaan is compromised of speech and action and there is increase and decrease in it. [7] If you do righteous actions there will be an increase in Eemaan and if you do bad actions there will be decrease. Is it possible that a man has no Eemaan yet he still remains within Islaam, if he repents he will enter into Eemaan and nothing takes one out of Islaam except Shirk or he rejects one of the obligations of Allaah, then he is a disbeliever. If he abandons an action due to laziness then this condition of his is with Allaah whether he punishes him or whether he forgives him.

Regarding the Mu’tazilah, our Scholars are agreed that they are in favour of performing Takfeer (declaring Muslims to be disbelievers) on the account of sins. Hence whosoever from amongst the Mu’tazilah is upon this, believes that Aadam (alayhis-salaam) by committing a sin also committed Kufr and when the brothers of Yusuf (alayhis-salaam) lied to their father, they also committed Kufr. The Mu’tazilah are agreed on this Aqeedah that if one was to steal then he is from the people of Hellfire, his wife will have to leave him. If he has performed Hajj previously he needs to repeat it. The one who says such things has indulged in Kufr. The ruling concerning them is that they are not given Salaam or spoken to, nor is their food to be eaten that they slaughter up until they repent from their Aqeedah.

“Muhammadur Rasoolullaah and those who believe are with him…”

It is necessary for the Muslim to have Eemaan in the Good and Bad of Qadaa and Qadar and hold the belief that every acceptable and non-acceptable points of Qadaa and Qadar are from Allaah. Allaah created the Heavens before he created the creation and he did Tahleeq of those who are worthy of it. Its blessings are continuous. Whosoever thought that parts of Paradise are wasted is a disbeliever similarly Allaah created Hell and its inheritors. Its punishment is continuous. People will come out of Hell due to the intercession of Messenger of Allaah (sal-Allaahu ‘alayhe wa sallam). The belief should be held of the Seeing of Allaah, the speaking of Allaah to Moosaa and that He (Allaah) made Ibraaheem (alayhis-salaam) his friend.

The Meezaan (Scale) is true, the Siraat (Bridge) is true, the Prophets are true, Eesaa (alayhis-salaam) is the slave and Messenger of Allaah. One should have Eemaan in the Hawd (Pool), Shifaa’ah (Intercession), Arsh (Throne), Kursee (Footstool) and Eemaan in that Maalik al-Maut removes the soul and it is returned to the bodies and they are questioned about Eemaan, Tawheed and the Messenger. To have Eemaan in the Soor (Trumpet) which Israafeel will blow. Also to have Eemaan that the grave, in Madeenah, is the grave of Messenger of Allaah (sal-Allaahu ‘alayhe wa sallam) and Abu Bakr and Umar (radiAllaahu ‘anhum). To have Eemaan in the fact that the heart of the believer is between the two fingers of Allaah. Dajjaal will descend in the Ummah of Muhammad and Eesaa (alayhis-salaam) will come at Ludd and kill him. The Scholars of Ahlus-Sunnah, whichever point they reject, they are the rejecters. Beware of Innovations.

The people the Messenger of Allaah gave tidings of Paradise to, then we also affirm them being from the People of Paradise.

According to us performing Raf ul-Yadain (raising the hands) and saying Ameen loudly is a means to increasing in the good. Supplications of righteousness, firmness and rectification should be made for the rulers. The sword should not be raised against them and war is not fought against them in issues of differing, nor should anyone be forced to say so and so is from the people of paradise. However this can be said about the Asharah Mubasharah, (the ten promised paradise) about whom the Messenger of Allaah (sal-Allaahu ‘alayhe wa sallam) gave the glad tidings of paradise.

Only mention the attributes of Allaah that he mentioned for himself and negate everything he negated for himself. Beware from debating with the people of desires. Withhold from mentioning the errors of the companions of the Messenger of Allaah (sal-Allaahu ‘alayhe wa sallam) and mention their virtues and remain silent about their mutual differences. Do not seek advice from the people of innovation concerning the religious affairs, nor travel with them. And for the permissible ni’kah (wedlock) there has to be a Walee (guardian), listeners of the khutbah and two trustworthy witnesses. Mu’tah (temporary marriage) is haraam (unlawful) up until the Day of Judgement. Pray behind every righteous person – even the sinful individual. Pray the funeral prayer of every individual who is from the people of the Qiblah because his affair is with Allaah. Obey every Imaam and Ameer. Participate in Jihaad and Hajj.

The takbeers of the funeral prayer are four, and if the Imaam says five then you also say five takbeers, like Alee (radiAllaahu ‘anhu). It is the saying of Abdullah Ibn Mas’ood to say the same amount of takbeers as the Imaam, but Shaafi’ee has differed with me in this. He says that if the Imaam says more than four takbeers then he should supplement the prayer and he has presented to me a hadeeth with its chain, of the Messenger of Allaah (sal-Allaahu ‘alayhe wa sallam) in which he said four takbeers in the funeral prayer.

The wiping over the khuffains is three days and nights and one day and night for the resident. The supererogatory prayer is two units. There is no prayer before the Eed Prayer. Pray two units before sitting down in whatever mosque you enter. The witr is one unit. Saying the Iqaamah is necessary.

I consider the people of Ahlus-Sunnah much better then Ahlul-Ahwaa (the people of desires) whatever their defects. May Allaah give you and us death upon Islaam and the Sunnah and may he give us its knowledge.
When Shaykh ul-Islaam Harawee was exiled he left all his books but he took this treatise with him. It is the saying of Ibn Mandah – rahimahullaah – said,

“Whoever read this advice and acted upon it is worthy of the verse upon him, Inna Abdee Laisa Laka Alayhim Sultaan.”

And he would often recite this khutbah in the start of his sermons. Haafidh Ibn Qayyim would often begin most of his books with it.

“The root of the seventy Two innovated sects are four sects, and from these four sects the seventy two sects spread. (The four being) The Qadariyyah, the Murji’ah, the Shee’ah and the Khawaarij.” [Reported by Ibn Battah in Ibaanatul-Kubraa (no. 278)]

“Knowledge is what comes from the Companions of Muhammad (sal-Allaahu ‘alayhe wa sallam) and that which does not come from a single one of them is not knowledge.” [Jaami Bayaan al-Ilm (2/36)]

“All of my Ummah will enter Paradise except those who refuse.” It was said “Who will refuse.” He replied “Whoever obeys me will enter paradise and whoever disobeys me has refused.” [Bukhaaree (9/284) Eng trans.]

“He who splits away from the Jamaa’ah by a hand span and then dies, dies a death of Jaahiliyyah.” [Bukhaaree (9/145) Eng trans.]

“…since the truth is that which the first Jamaah from the time of the Prophet and his companions were upon. No attention is given to the great number of people of futility coming after them.” [Al-Baa’ith Alal Bid’ah wal Hawaadith (p .19)]

“I found that the affair was Ittibaa (Following and submitting to the narrations).” [Sharh Usool I’tiqaad (no. 113)]

“Follow and do not Innovate, for you have been given that which is sufficient and every innovation is misguidance.” [Kitaab al-Ilm of Abu Khaithamah (no. 54)]

“There is no path which is more straight and direct to Paradise than the path of the one who travels upon the Aathaar (narrations).” [Sharh Usool I’tiqaad (no. 112)]

[6] Jahm Ibn Safwaan, the student of Ja’d ibn Dirham, both were executed for apostasy in the time of the lesser Taab’ieen. They deny the Sifaat (attributes of Allaah and declare the Qur’aan to be created.

“I swear by Allaah I asked countless Scholars and Jurists in Iraaq and in other cities concerning Eemaan, all of them said “Eemaan is speech and action, it increases and decreases.” [Kitaab at-Tawheed p.9]