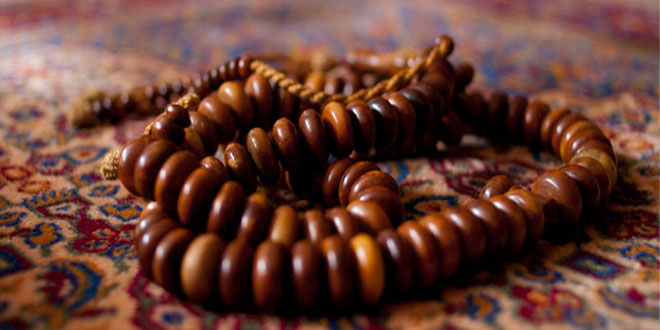 Then, verily the hadeeth, in reference to its meaning, is false according to me for reasons:

That the subhah (thikr beads) is an innovation that did not exist in the time of the Prophet (sallallaahu ‘alayhi wa sallam). It was only introduced after him (sallallaahu ‘alayhi wa sallam), so how could it be thought that he encouraged his companions to do a matter that they did not even know (i.e. thikr beads were not known to them)? And the proof regarding what I have mentioned is what Ibn Wadhdhaah reported in “Al-Bida’ wan-Nahy ‘anhaa” (Innovations and the Prohibition of them), on the authority of As-Salt bin Bahraam that he said,

“Ibn Mas’ood passed by a woman who had a tasbeeh (string of beads) with her that she was using to glorify Allaah, so he cut it and threw it away. Then he passed by a man who was glorifying Allaah using pebbles so he kicked them with his foot, then said, ‘Indeed you all have went ahead (of the companions), you have wrongfully engaged in an innovation, and indeed you have overcome the companions of Muhammad (sallallaahu ‘alayhi wa sallam) in knowledge.’”

And the chain of narrators of this narration is authentic (Saheeh) back to As-Salt, and he is reliable from the followers of the successors (Atbaa’ ut-Taabi’een, third generation).

“I saw the Messenger of Allaah (sallallaahu ‘alayhi wa sallam) counting the glorification of Allaah with his right hand.”

And Al-Albaanee also said (1/117): And if there was nothing in the thikr beads other than one evil, and it is that it has overcome the Sunnah of counting with the fingers or it almost has – this is along with their agreement that the fingers are better – then this would be sufficient (as an evil). For verily it is rare that I see an old man counting the glorification of Allaah on his fingers!

Then, verily the people have become specialized in inventing things along with this innovation. So you will see some of those who attribute themselves to one of the Soofee paths hanging thikr beads around his neck! And some of them count (the remembrance of Allaah) while they are speaking to you or listening to you talk! And the last thing that my eye fell upon from that some days ago was that I saw a man on an ordinary bicycle riding along on it on some roads crowded with people, and in one of his hands was some thikr beads! So they try to show to the people that they are not heedless of the remembrance of Allaah even for the blinking of an eye. And often times this innovation is the cause of losing the performance of that which is obligatory, for indeed it has happened to me repeatedly – and likewise to others besides me – that I have given the greeting of Salaam (peace) to one of these people, so he responds to the greeting by waving without saying the Salaam. And the harms of this innovation cannot be counted, so how beautiful is the statement of the poet:

“And every good is in following those who went before (salafa),

and every evil is in the innovating of those who came after (khalafa).”