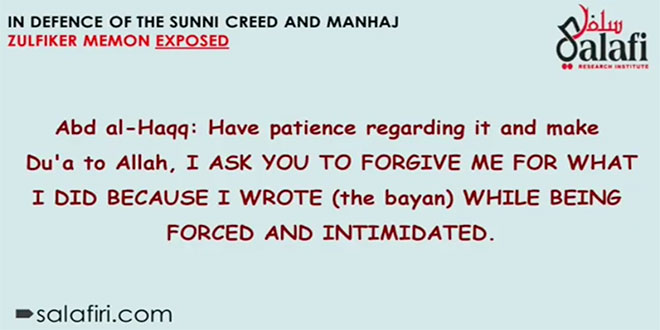 This is the audio of the conversation between Abu Khuzaimah Ansari and Abd al-Haqq b. Shaykh Muhammad Ra’is Nadwi.

Zulfiker Ibrahim Memon and his blind following team, like Wali ud Din Durrani from Australia, Abu Habibullah Somali from London, Uzayr Nazir from Nottingham (currently studying with Ikhwanis in Jordan), Umar Farouq Abul Baihaqi, and the rest of the motley crew, after three (3) unsuccessful attempts in complaining to YouTube to remove this audio conversation, were at last successful on the fourth (4th) attempt. These are men of this Ummah who call themselves Salafis. They spread videos and audios about Abu Khuzaimah and when SRI responded, they were unable to handle the truth and the true reality of their Zulfiker Ibrahim Memon and had to complain to YouTube like crying little babies, as if they had lost their dummies. If you can’t handle the truth, stop lying.

They said the conversation with Abd al-Haqq was recorded without his permission. We say, so what! It is permissible when you know someone lies and in order to clarify the truth to expose the ardent liars. Let us ask you, and we challenge you on this, when the questioner asked Shaikh Wasiullah Abbas Hafidhahullah Ta’la the questions about Abu Khuzaimah, did he seek permission or did he secretly record the Shaikh. Please answer this? Yet you still uploaded that audio conversation on social media. This is another contradictory lie of these openly deceptive liars, following in the footsteps of their spiritual pir, the one who was unable to shake off the disease of the Deobandiyyah, Zulfiker Ibrahim Memon.

It was these deceptive liars, Zulfiker Ibrahim Memon and his merry men, who spread and initiated these points on social media and they were the ones who dishonoured our  Shaikh Wasiullah Abbas. Yet again, they had no concern for Salafiyyah but rather aided Ahl a-Bid’ah, why? Because none of them know the principles and qawaid of Da’wah Salafiyyah and the people of Hadith

Zulfiker Ibrahim Memon released another audio of Shuayb Junagarhi, as if it was some sort of defence of Zulfiker’s despicable, evil and vile behaviour of coercion, intimidation, bribery, pressure and forcing a bayan. Listen carefully and read carefully, no one said Shuayb Junagarhi said, rather it was said that it was found out via his route that he called Abd al-Haqq. As for his response, then direct it to Abd al-Haqq who said that SHUAYB JUNAGARHI SAID TO HIM ZULFIKER IBRAHIM MEMON WAS AN AGGRESSIVELY EMOTIONAL PERSON. These people are so ignorant and blinded from the truth, they clearly heard Abd al-Haqq say this himself, yet they shift the blame to others.

Furthermore, Abd al-Haqq was already aware that Zulfiker was spreading this about him as he was shown the evidence way before. It was Zulfiker himself who was spreading this about Abd al-Haqq that he hits his mother, he is not reliable with money, he has mental issues, he was dropped as a child. etc. MANY brothers in the UK can confirm this and it is well known that Zulfiker told numerous people and now that both parties have been caught lying through their teeth, red handed with clear unequivocal audio proof, they have started the deniability and blame someone else game. In fact some brothers, knew that Abd al-Haqq was a liar and did not want to even converse with him. He is no doubt the unfortunate victim in all of this due to the deception and cunning behaviour of Zulfiker, he seriously exploited Abd al-Haqq’s financial situation. Zulfiker will not spare anyones honour, he will degrade and attack you and your families honour, sooner or later. Stay away from this evil disgusting dajjalic devil.

These immature and ignorant individuals, full of bravery and the courageous men that they are resorted to (a) posting on Facebook under their wives names (b) made fake profiles like “Pedro Synco” in order to make a mockery and fool of themselves, and where are you now O Pedro! (c) made profiles with generic names like Ahl al-Hadith and attempted to answer the points.

Some people, have tried to take advantage of the open refutation and exposition of this disgusting dajjalic devil, Zulfiker Memon and have made websites trying to refute Zulfiker. The truth is that many people hate and despise Zulfiker and so many people will do whatever it takes to expose this evil individual because he has attacked their honour and their families. He coerced and manipulated money out of people, stole books and manuscripts. Zulfiker Memon, the pir, the one who has not fully left his Deobandism. Salafi Research Institute and its members refute Zulfiker openly and behind close doors with their real names and identities, they have done this publicly, on social media, in written form and audio form, they are not scared neither do they shy away from the filth of this evil individual. The same people who accuse Salafi Research Institute and Abu Khuzaimah of being behind these websites are desperate to pin anything on him, when they themselves are Pedro Syncho and Pellawon on social media going on ruthless like rabid puppies. Where is Zulfiker in all of this, well not a single squeak from the grand pir and “sheikh”. Also, when we make a website on Zulfiker, we will let you know, trust me.