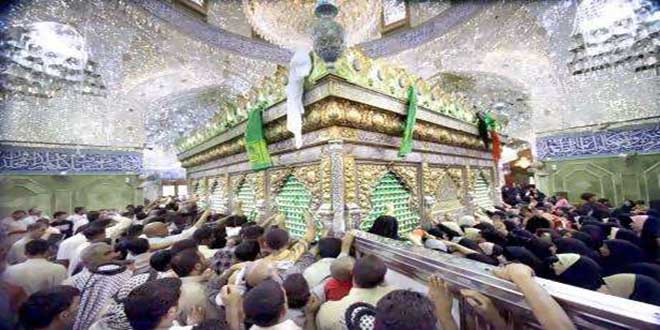 “Oh Allaah if you keep these people alive then divide them into more sects and separate their paths and do not make their leaders happy with them. These people called me (to Koofah) and told me they would help me but they just showed hostility and enmity towards me and also killed me.” (al-Irshaad pg.231 of al-Mufeed Shee’ah)

Hence in this regard Sayyid Muhsin al-Ameen said,

“20,000 people from Iraaq gave Hussain (RadhiAllaahu Anhu) pledge of allegiance (via letters and on the hand of Muslim Ibn Aqeel) and then they betrayed and deceived him and then came out in the open opposing him (at Karbala). Their pledge of allegiances are around their necks because they killed Hussain (RadhiAllaahu Anhu).” (A’ayaan ash-Shee’ah Part 1, pg.34)

“Are you unaware that you yourselves wrote letters to my father and then you treacherously betrayed him whereas you people had vehemently promised your pledge of allegiance. You people fought with him and defeated him. So then, now tell me with what face do you look at the Household of the Messenger of Allaah (Sallaahu Alayhee Wasallam)? So that the Messenger of Allaah (Sallaahu Alayhee Wasallam) can say to you that you are the people that brutally killed my family and attacked my honour and dignity, you people (ie Rafidhah Shee’ah) are not from my Ummah.” (al-Ehtijaaj 2/32 of Shee’ah Tabrasee)

“Oh People of Koofah (ie Rafidhah Shee’ah), oh you deceivers, you treacherous arrogant people, Allaah has tested you with our affair ie the Ahlul Bayt and he also tested us. Did we not pass this test? You people lied to us, disrespected us, believed it was permissible to kill us, you considered our wealth to be lawful. You also did this to our forefathers and your swords are still bloodied with the blood of Ahlul Bayt. May Allaah destroy you, wait for his punishment and curse as this has become obligatory upon you. You will begin fighting with one another as a form of punishment and you will continue to be punished with severe torment until the day of judgement for oppressing us, beware as the curse of Allaah is upon the oppressors. May you people be destroyed, you people betrayed Alee bin Abee Taalib (RadhiAllaah Anhu), you betrayed my grandfather, his sons and this righteous household.” The people of Koofah heard this and said, “Yes! We killed Alee and both of his sons with our swords and spears, we captivated their women and we severely wounded them.” (al-Ehtijaaj 2/28)

Zainab, The daughter of Alee (RadhiAllaah Anhu) said to the treacherous people of Koofah,

“Oh you people of Koofah, you are a group of coward treacherous people your example is like that woman who cut her meat and separated it into different parts. What do you people have other than lying, having animosity and enmity for us. You (ie Rafidhah Shee’ah) thought it was easy and cheap to kill the children of the Messenger of Allaah (Sallaahu Alayhee Wasallam)” (al-Ehtijaaj 2/29-30)