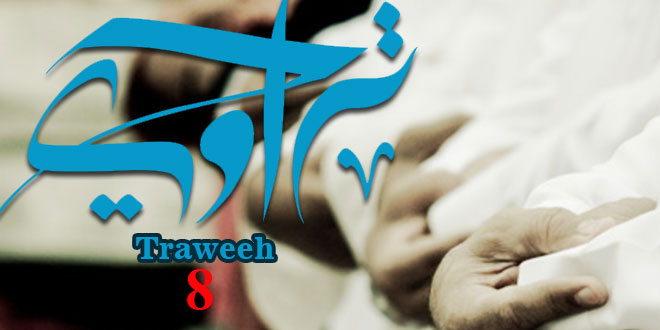 “We kept the fasts of Ramadhaan with the Messenger of Allaah (sal-Allaahu ‘alayhe wa sallam), then he led us in Qiyaam (Taraweeh prayer) on the 23rd night (when seven nights were left) till about one third of it passed. He did not observe it on the 24th, then on the 25th night he led us till about half the night passed. We requested to offer supererogatory prayer during the whole night. The Messenger of Allaah (sal-Allaahu ‘alayhe wa sallam) said, “He who observes Qiyaam along with the Imaam till he finishes it, then it is as if he offered prayer the whole night.” Then he did not observe the Qiyaam with us on the 26th night, then finally on the 27th night he gathered his wives, members of his household and the people and he led everyone in the Qiyaam (Taraweeh prayer) till we feared of missing the dawn meal.” [Ibn Maajah (no. 1327) (2/287) (Arabic/English)][1]

It is clear from this narration that the Messenger of Allaah (sal-Allaahu ‘alayhe wa sallam) led the taraweeh prayer in three parts of the night and by praying it after Eesha until the end of the night he informed us of its time. It is likely that no time would have remained for tahajjud, (as taraweeh on the 27th night was prayed so late in the night to the extent that there were fears of missing the dawn meal) therefore no doubt remains about taraweeh and tahajjud being one prayer.

“There is no way out or alternative in accepting that the taraweeh of the Messenger of Allaah (sal-Allaahu ‘alayhe wa sallam) was eight (8) rak’ahs (units), and it is not established by any narration he prayed taraweeh and tahajjud separately.” [Urf ash-Shadhee (1/166)] [2]

Praying taraweeh or tahajjud with congregation, or alone in the mosque or in the house in the latter part of the night is more virtuous. Umar (radi-Allaahu ’anhu) said,

“Praying it late at night when you go to sleep is more virtuous than praying in the first part of the night.”

During this era of laziness and excuses; the taraweeh should be prayed with the congregation otherwise many people will leave and abandon it. Never mind listening to the whole Qur’aan they will not even hear the Qur’aan at all!During the Khaliphate of Umar (radi-Allaahu ’anhu) taraweeh was prayed at the earlier time with congregation and the Messenger of Allaah (sal-Allaahu ‘alayhe wa sallam) also prayed in the first part of the night during the first night (on the 23rd night).

THE NUMBER OF RAK’AH OF TARAWEEH

Different statements from the Salaf have come concerning taraweeh, 40, 38, 36, 34, 28, 24 and 20. Ainee (Hanafee) and others have discussed them in detail. From these statements the one that is most correct is the one of the 8 rak’ahs with 3 Witr; totalling 11 rak’ahs and this is the Sunnah. Any other statement is not in accordance with the Sunnah. If someone wishes to pray more than 8 e.g. 20 or more, then he may do so. 20 rak’ahs should not be made specific, neither is this that which was practiced by Umar (radi-Allaahu ’anhu) as he also commanded the people to pray 11 rak’ahs during his khaliphate.

PROOFS FOR 11 RAK’AHS WITH WITR

And none of the narrations of 20 rak’ahs is authentic.

and other Hanafee scholars have all said the narrations of 20 rak’ahs is weak and they established 11 rak’ahs to be the Sunnah. [10]

[2] He further said,“8 rak’ahs taraweeh is authentically proven from the Messenger of Allaah (sal-Allaahu ‘alayhe wa sallam) and the narration of 20 rak’ahs is narrated with a weak chain and there is agreement of its weakness.” He also said,“According to my preference taraweeh and tahajjud are one prayer, although there are differences in their attributes.” [Faidh al-Baaree (2/420)]

[4] Tabaraanee in Mu’ajam as-Sagheer (p.108), Qiyaam al-Layl (p.90) of Muhammad ibn Nasr Marwazee, Saheeh Ibn Khuzaimah (2/138), Saheeh Ibn Hibbaan (4/62, 64), the chain is hasan as indicated by Haafidh Ibn Hajr Asqaalanee in Fath ul-Baaree (3/10) and in Talkhees al-Habeer (p.119), Aathaar as-Sunan (p.248) of Nimawee Hanafee. Also authenticated by Maulana Abdul Haiy Lucknowee Hanafee Umdatur Raayah (1/207) and Ta’leequl Mumajjid (p.138) who said it was extremely authentic. Imaam Bukhaaree has bought this hadeeth in both the chapters of tahajjud and taraweeh, indicating he made no distinction between them. [Salaatul Taraweeh of Imaam Naasir ud Deen]

[10] Muhammad Qaasim Nanautwee the founder of Deoband writes,“it is written from the people of knowledge that Taraweeh (Qiyaam ul-Ramadhaan) and Tahajjud (Qiyaam ul-Layl) are in reality both One.” [Fuyoodh Qaasamiyyah (p.13)