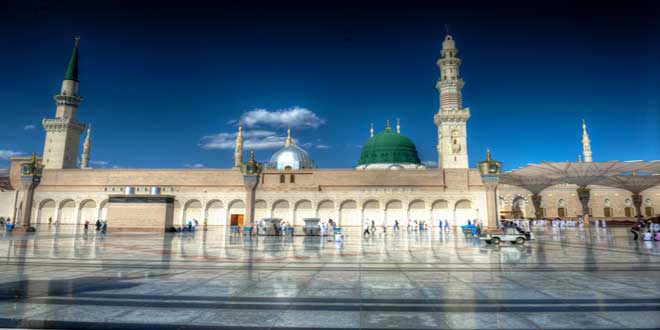 The Mawlid Papers Part 12 – An Analysis Of The Proofs Of The Proponents of Mawlid un-Nabee. The 7th Proof – The Sacrificing of Camels By the Prophet (Sallalahu Alayhi Wasallam) – Shaikh Muhammad Munir Qamar

They say that the prophet at the time of the farewell pilgrimage sacrificed 63 camels. Then some of them build upon this and take a totally wild shot by saying that he did this in order to make up one sacrifice for every year of his life, thus celebrating his Mawlid!

It is the way of Ahlul Bidah (the people of innovation) that they first introduce an innovation then they attempt to twist and massacre the texts available to suit their own needs. Then it is the same here for the evidence has no connection with the deduction that they draw from it for the following reason,

(1) It is known that the sacrifices were given at the time of hajj on the 10th of Dhul Hijjah, which is the twelfth Islamic calendar month yet the birth of the prophet was in Rabee ul-Awwal, the third Islamic month, so what nexus is there between the sacrifices and Milaad un-Nabi?

(2) If this evidence is to be used as a text for the proof to celebrate milaad then they should this Milaad in Dhul Hijjah rather than Rabee ul-Awwal.

(3) The prophet gave the sacrifice of 100 camels in Dhul Hijjah, 63 of which he bought with him from Madeenah and 37 which Alee bought with him from Yemen as is mention in ‘Sharh Muslim Nawawee’ (8/196) as reported from Qaadhee Ayaadh who said, “That Alee bought the 37 camels with him from Yemen as has been reported in Tirmidhee. Then if it is said that why did the prophet then give the 63 camels in sacrifice then this is a baseless question and is it is as has been reported.”

(4) Some of the scholars have interpreted the giving of 63 camels as a sign that the prophets life was nearing its end as has been reported in various modes concerning the year the prophet performed the farewell pilgrimage. For example, on the day of arafah in that year the verse “today I have completed your religion….” was revealed, On the day of Tashreeq Soorah Fath was revealed, the fact that the prophet continually admonished the people and at times alluding to the fact that it may not be possible that he be gathered with the companions again during pilgrimage and so on. Thus the 63 camels signify that there would be no further years added to the life of the prophet and this is clearly the showing the end of the life of the prophet instead of meaning the start of celebrating his birthday.   Surely they see the difference between the start and end of something?

From his book ‘Celebrating Milaad On the Day Of Messenger of Allaah (Sallalahu Alayhee Wasallam) Died’ (pg.33-35)