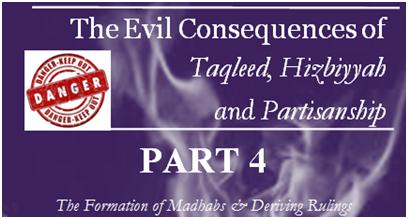 2) Ok the scholars state that the laypeople can take a ruling without understanding the reasoning behind it from a reputable scholar, isnt that similar to what the madhabs have done, ie the pious predecessors with their methodologies have derived rulings for all thinkable and unthinkable topic areas?

I think there seems to be an incorrect understanding with regards to this discussion. We say a normal lay or average person can ask Ahlul ilm or a scholar pertaining to any issue which the lay person then goes and acts upon.  With regards to this the scholars have differed whether this is taqlid or not.  Some have classed this as ittiba and they use the ayah which states ask the people of knowledge if you do not know.

This is more accurate as this what the earlier Muslims did and no one use the word Taqlid and hence this is the reason you will not find the usage of this word in the first three generation. That a single one said to another go and do taqlid of so and so in all of their affairs.

It could be argued the normal lay person does not need to know the reasoning behind the legal edict but this does not in anyway or form suggest the scholar does not provide evidence. It would be sufficient alone if he said Allaah says or The Messenger of Allaah (Sallalahu Alayhi Wasallam) said…

This no longer remains taqlid, in this situation it is not necessary the for lay person to understand the intricacies of the evidence ie the Asbab an-Nuzool, Qate ud-Dalalah Aam, Khaas Raje Wal-Marjoo etc but what suffices and what is is important is that he knows and comprehends there is evidence from Allaahs book or the Sunnah.

The madhabs evolved in different ways, each very different from the next. What is also important to note these madhabs were not formulated during the eras of the Imams but years later, in fact 3 to 4 centuries later.

The Imams themselves would derive rulings from the Book and the Sunnah and this is an undeniable fact. However in the same instance these Imams applied their own individual ijtihad. In doing so they also applied and formulated some of their own principles and rule, each differing from the next.

Therefore they based their rulings on some of these principles and rules. So now with all of these different rules and principles they differed with each other and so it is very possible they also made mistakes. So due to these principles and rules their understanding and attempting to reconcile the ahadeeth may have led them to err and make mistakes in their rulings. Numerous examples can be highlighted here and this would lengthen the discussion.

The main point is that the Imams as great and revered they were in terms of their knowledge and comprehension, were at the end of the day humans and made errors. We have not been obligated to follow their mistakes or errors.

When Imams, Malik, Shafi and Ahmad ibn Hanbal said this can last till 4 years. Walid ibn Muslim mentions that he narrated to Malik that Jamilah bint Sa’ad narrates from A’ishah (Radhi Allahu Anha), “A woman does not exceed 2 years of pregnancy.” Imam Malik said Subhanallah, who says this? The wife of Muhammad bin Ejlan remained in her mothers womb for 4 years. Shafi said Muhammad bin Ejlan remained 4 years in his mothers womb. Ahmad said the women of Banu Ejlan would remain pregnant for 4 years.” (al-Mughni 8/84-85 of Ibn Qudamah). And there are numerous examples.

The most comprehensive point in rebutting and expanding on this point is that if all the madhabs took from the Quran and Sunnah, why are there so many differences amongst them in these issues and we know this is a clear reality.

We will not go into the different usools the madhabs formulated for themselves and then differed with each other base don their understanding of the texts. The main problem here is that we accept the Imams took from the Book and the Sunnah, but what is obligated upon us ie the normal lay Muslims.

Then in later years their respective students modified the rulings of their respective teachers, and then they presented their own fiqh with the modifications. Then their students did the same and this continued over the years.

Some of the scholars preserved the rulings of the imams so for example in the Hanafi madhab you might have three opinions ie one of Imam Abu Hanifah, one of Shaikh Muhammad Shaybani and another of Qadhi Abu Yusuf but the questions is what is the actual ruling and whose ruling was it and what evidence did they use.

Therefore it is possible the madhabs in their own way derived the necessary rulings for a whole host of issues based on their formulated principles. So firstly they differed with each other.

Secondly who exactly made these principles and rules.

Thirdly when we say the madhabs did this ie formulated or derived the rulings, yet again what is exactly meant by this?  Is this not following a way other than the Book and Sunnah even though they may have used the same sources for their extraction and interpretation.

Fourthly what does an individual do when he knows their madhab is going against the authentic hadeeth. This indeed is a burning question!!!

With regards to the rulings from the judge or Qadhis perspective the judgements of Qadhi Abu Yusuf are given more precedence over the verdicts of Imam Abu Haneefah because Qadhi Abu Yusuf studied with him as well as others before him. (Refer to Rasm al-Mufti pg.35 and Radd al-Mukhtar 1/71)

Kawthari the defender of the Hanafi madhab in his brief summary in answer to a point raised by Imam Juwainee essentially argued that the 4 Imams were not infallible or entirely certain with regards to the rulings. He said Imam Abu Haneefah remained silent and did not pass judgement on many issues. Imam Malik said regarding many issues that he did not know.

Imam Shafi has 2 conflicting statements regarding one issue and he often also said the authentic Hadeeth was his position. None of these realities take away the status or rank of these Imams and this is because none of the Imams had all of the knowledge pertaining to the deen. (Summarised from Kawthari Hanafis Ahqaq al-Haq pg.22)

It is well known and famous about Imam Malik that whenever he did not know the ruling on an issue or topic ie he was unable to derive a ruling he would say I don’t know, la adri. The two well known scholars of the west, Imam Ibn Abdul Barr and Allamah Shatibi opined that if all of these instances were collated and compiled it would amount to a short treatise.(al-Muwafiqat 4/288).

So when we know and accept and even the staunchest of the muqallideen or muqallids and there is no one more deserving of this title than Kawthari Hanafi, that even he admits and accepts that the Imams did not have all the knowledge and they would clearly say I don’t know and then centuries later we are hell bent in trying to prove and establish the 4 Imams had enough knowledge to derive all the rulings even today. This is is especially so when the modern world has thrown us more challenges.

Another important angle or aspect to consider and this is again another pivotal point, how many books did each of the 4 respected Imams leave. What books did Imam Abu Haneefah leave on Fiqh? Is Fiqh ul-Akbar or Fiqh ul-Absat really his books and if so were they on aqidah or Fiqh. Imam Malik left his Muwatta but is this a book of Hadeeth or is this a book of Fiqh?

How many did Imam Shafi and Imam Ahmad bin Hanbal leave, can it be argued his book al-Musnad is a book of Fiqh or Hadeeth. How accurate and correct would it be to include the issues ie the ‘al-Masails’ his sons and students compiled by asking him questions as part of the Hanbali madhab.

Similarly Qadhi Abu Yusufs ‘al-Amwal’ and what do we say about his book ‘Ikhtilaf Abi Haneefah Wa Ibn Abi Layla’ can such a book highlighting Ibn Abi Layla’s differences with Imam Abu Haneefah be classed and included in the books of the Hanafi madhab.

Furthermore, these Imams were indeed illustrious and pivotal in the derivation of issues of Fiqh but this alone was not sufficient as other sciences were not completed or were still on the early stages of formulation or progressive for example the sciences of Hadeeth, the biographical notes and science of praise and criticism. So therefore it is possible not all rulings were entirely accurate at the time they were made or they were made on weak narrations etc.

In addition to this not all knowledge is just contained in Fiqh but rather also in other sciences and the Scholars and their students were possibly not proficient in all the sciences. This is what the late Deobandi Hanafi scholar Anwar Shah Kashmiri said, “Whoever thinks all the knowledge is contained within Fiqh and there is nothing outside of it, then he is far away from the truth.” (Faidh al-Bari 2/10).

So in light of this when we know there were many differences between the scholars and the scholars themselves admit to not knowing all the answers to some of the issues and when we know that not all the knowledge was contained just in Fiqh. How is it possible or feasible to hold on to a particular madhab or to say all the rulings contained within a madhab are correct and worthy to be followed.

Another interesting point here and it is to be noted very well, that when the madhab of Imam Abu Haneefah was formulated, which was the first madhab and this students who differed with him in numerous issues contributed to the madhab, then if this was the case why was there a need for other madhabs to be established.

In addition to the four main madhabs we also had the madhab of Imam Laith Ibn Sad, Imam Awzai, Imam Sufyan at-Thawri and Imam Sufyan, why were all of these madhabs formulated if they are also doing the same thing is deriving and establishing rulings from the book and Sunnah.

The people claim they are following the Hanafi madhab however the rulings and their derivation was not carried out by a single person say for instance only Imam Abu Haneefah but Imam Shaybani, Qadhi Abu Yusuf and Shaikh Zafar also contributed, in fact the common understanding is that a committee of 40 scholars was set up and they all collectively contributed towards the formulation and derivation of the legal rulings and edicts.

By the two who are in need of the Mercy of his Lord, may Allah forgive us