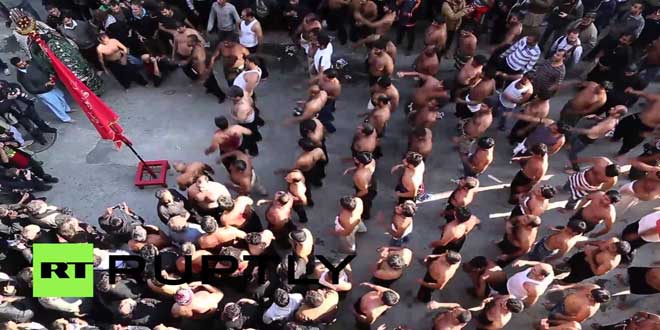 The Shia Papers Part 11 – Some False Allegations on Yazīd

History has seen whenever a group of people is responsible for a heinous crime they always attempt to blame others, at the same time they deny and reject any responsibility.

The Rāfiḍah Shīʿa are so corrupt and deceptive in their portrayal of the true affair of Karbala that one begs a question that if Yazīd was so bad and evil which made him responsible for the death and killing of Ḥussain RaḍiAllāhu ʿAnhu, why do the Shīʿa mourn, lament and act this false drama of beating themselves up. The fact of the matter is there can only be one truth.

They blame Yazīd but they also beat themselves up for being responsible. This shows the Shīʿas need to have a reality check and ask themselves what kind of religion encourages such violent behaviour to the extent that young children to adults are made to suffer in pain.

It is a true reality that the Shīʿas themselves were responsible for the death and the slaughter of the family of Ḥussain RaḍiAllāhu ʿAnhu, May Allāh raise their rank, Amīn.

Thus, in scape goating others the Shīʿa have fabricated and concocted all sorts of lies, slander and centuries of a smear campaign against Yazīd Rahimahullāh and Mūʿawiyyah RaḍiAllāhu ʿAnhu and a vicious and brutal onslaught of their character and personalities.

For example the Shīʿa say from their fabrications that when the head of Ḥussain RaḍiAllāhu ʿAnhu was taken to Yazīd Rahimahullah he his teeth and face with hit a stick.

This is indeed one of the worst lies the Shīʿa can fabricate, Imām Ibn Taymīyyah repudiates this lie and says,

“This is not established as the narration itself contains the reason it is lie and that is when this incident allegedly and supposed happened, the companions were not in Shām but rather they were in Iraq.” (Minhāj as-Sunnah (2/249)

They further add to this and say the head of Ḥussain RaḍiAllāhu ʿAnhu was paraded around in the cities and in Sham. Then this is also an arch lie and the head of Hussain RadhiAllahu Anhu was not paraded at all as the Rāfiḍah Shīʿa claim. (Refer to Farsī Ṣharh Qasīdah Amālī (pg.23) and Minhāj as-Sunnah (2/249)

It is further cited that Yazīd did not order the killing of Ḥussain RaḍiAllāhu ʿAnhu and the people of texts are in agreement in this. (al-Muntaqa Min Minhāj al-ʿE’tidāl (pg.292), Minhāj as-Sunnah (2/225)

Yazīd had no intention of killing Ḥussain RaḍiAllāhu ʿAnhu but rather he just wanted him to be kept away from the Khilāfah and control any further support and uprising against his rule.