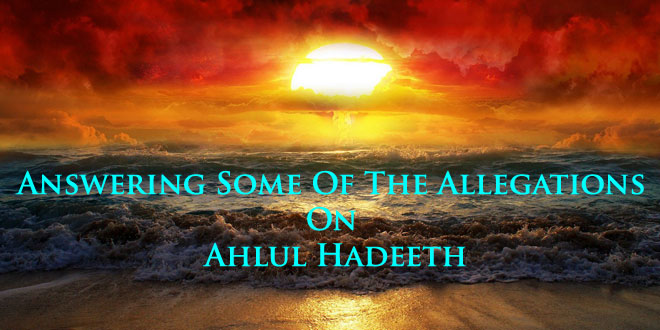 All praise be to Allaah, lord of all the creation, and may there be salutations and blessings upon the true Messenger.

The title and attributive name of the scholars of Hadeeth who possessed sound Aqeedah and followed the Quraan and Sunnah based on understanding of the Salaf us-Saaliheen without any taqleed, is Ahlul Hadeeth. According to the Ahlul Hadeeth, the Quraan, the authentic ahadeeth (based on the understanding of the Salaf us-Saaliheen and Ijmaa (unanimous agreement or consensus) constitute sources of legislated evidences. These sources are also known as Adillah Sharee’ah. The permissibility of Interpreting these evidences of the Sharee’ah is proven and there numerous types of interpretations,

1) Interpreting and deducing from the generality and understanding of the Quraan and Hadeeth.

3) Analogical reasoning which does not contradict or oppose the legislated evidences.

4) That which is unrestrictedly beneficial

Interpretations ie ijtihad is permissible according to the Ahlul Hadeeth and therefore after interpreting and deducing from the 3 sources of evidence of the legislated Sharee’ah, acting upon the fourth evidence is also permissible (ie correct or authentic Qiyaas, analogical reasoning) on the condition that it does not oppose and contradict the Quraan, Sunnah, ijmaa and the reports of the Salaf us-Saaliheen, in other words according to the Ahlul Hadeeth the 4 aforementioned sources of evidence with their understanding constitute evidence.

NOTE WELL:- ijtihad ie interpretation of the texts is something that is conducive to time and temporary hence therefore it can not be established to be legislation forever. Similarly the interpretation of one individual cannot be imposed as binding evidence upon another. After this brief prologue we present answers to some of the objections and allegations of some of the people upon the Ahlul Hadeeth.

Allegation 1
The Ahlul Hadeeth only have 2 sources of evidence ie the Quraan and the Hadeeth and therefore they don’t have a third source.

ANSWER
The Messenger of Allaah (Sallalahu Alayhee Wasallam) said, “Allaah will never unify my Ummah upon misguidance.”(Mustadrak al-Haakim (1/116 no.399) it chain is authentic). Therefore this Hadeeth proves unanimous agreement of the Ummah constitutes evidence. (Refer to the Monthly Magazine al-Hadeeth June 2004 vol 1 pg.4)

Haafidh Abdullaah Ghazipuri Muhaddith (d.1337H) said, “No one should understand from this that the Ahlul Hadeeth deny and reject the ijma of the Ummah and the legislated Qiyaas because when both sources are established from the Quraan and Sunnah it follows by default that by accepting the book and the Sunnah they too are also accepted.” (Ibraa Ahlul Hadeeth Wal Quraan pg.32)

So we find according to the Ahlul Hadeeth if the ijma of the Ummah is proven to be established then it is a legislated evidence. This is why every issue of the monthly al-Hadeeth magazine it says, “Upon the understanding of the Quran, Hadeeth and ijma.” We should also remember that according to the Ahlul Hadeeth ijtihad is permissible as has proceeded in the prologue, all praise be to Allaah.

ANSWER
This allegation is totally baseless and incorrect rather on the contrary to this Hafidh Muhaddith Abdullah Raupari (d.1384H) said, “In summary we only know one thing and that is that it is impermissible to oppose the Salaf.” (Fatawa Ahlul Hadeeth (1/111).

3rd Allegation
Only Bukhari and Muslim constitute evidence according to the Ahlul Hadeeth and they don’t accept the other books of Hadeeth.

4th Allegation
The Ahlul Hadeeth do not do taqleed.

ANSWER
yes that’s absolutely correct the Ahlul Hadeeth do not do taqleed because there is no evidence for the permissibility and obligation of taqleed from the Quraan, Hadeeth, ijma or from the reports of the Salaf us-Saliheen. On the contrary Mu’adh Ibn Jabal (RadhiAllaahu Anhu) said, “As for the error of a scholar even though he maybe upon guidance then we still do not do taqleed of him in the deen.” (Kitaab uz-Zuhd (1/300 no.71) of Imam Waki, it’s chain is Hasan, also refer to my book The Issue of Doing Taqlid in the Deen (pg.36)

The Illustrious Imam of Ahlus Sunnah Imam Muhammad bin Idris ash-Shafi’ee forbade doing Taqlid of him and others. (Kitab al-Umm, Mukhtasar al-Muzani (pg.1), The Issue of doing Taqlid in the Deen (pg.38)

The famous scholar of Ahlus Sunnah Hafidh Ibn al-Qayyim said, “This innovation (ie of Taqlid) started in the fourth century.” (A’laam al-Muwaqqi’een (2/208) The issue of doing Taqlid in the Deen (pg.32).

It is known with certainty that salvation in this life and in the hereafter lies in acting upon the Quraan and Sunnah and abstaining from innovations.

ANSWER
Whether it is Waheed uz-Zaman, Nawab Siddique Hasan Khan, Noor ul-Hasan or Batalwi , then none of them are from the leaders of the Ahlul Hadeeth and even if they were, the Ahlul Hadeeth are not fanatical about their elders anyway.

Amin Okarwi deobandi taqlidi accepted that the scholars of Ahlul Hadeeth and the general people are all in agreement and declared the books of Waheed uz-Zaman to be erroneous and hence rejected. (Tahqiq Masalah Taqlid pg.6) Shabir Ahmad Usmani the deobandi liked Waheed uz-Zamans translation of Sahih al-Bukhari (Refer to Fasl al-Bari (1/23) by Muhammad Yahya Siddiqui Deobandi.

Waheed uz-Zaman also considered it obligatory for the general masses to make Taqlid (Refer to Nuzul al-Abrar (pg.7) printed by deobandis) therefore whilst being just and fair in this issue Waheed uz-Zamans statements should be presented against the people of Taqlid and the deobandis.

(trans note. this point requires further clarification, which inshallaah may be done at a different time)

The 6th Allegation
Mufti Abdul Hadi Deobandi wrote, “it is a historical fact that the Ghair Muqallideen (who call themselves Ahlul Hadeeth) did not exist prior to the British (Colonial) rule.”

(2) The general people of the muhadditheen who possess the correct and sound aqidah and who act upon the Quraan and Sunnah without taqlid.

Both of these group of people have existed in every era from the time of the best generations up until today.

THE FIRST EVIDENCE
There is no clear evidence from the companions that they did taqleed of one particular individual or taqleed in general, in fact rather Mu’adh ibn Jabal (RadhiAllaahu Anhu) said, “As for the error of a scholar even though he maybe upon guidance then we still do not do taqleed of him in the deen.” (Kitaab uz-Zuhd (1/300 no.71) of Imam Waki, it’s chain is Hasan, also refer to my book The Issue of Doing Taqlid in the Deen (pg.36).

Ibn Masood (RadhiAllaahu Anhu) said, “Do not do taqleed of men in your deen.” (as-Sunan al-Kubra (2/10) of Baihaqi, its chain is authentic also refer to The Issue of Doing Taqlid in the Deen pg.35)

None of the companions oppose or differ with them in this and therefore it proves there is ijma ie unanimous agreement that taqleed is prohibited and we also come to know all of the companions were Ahlul Hadeeth. It should also be noted the opposers and those who differ with us, all the evidences they present in support of their argument do not have the word taqleed in them.

THE SECOND EVIDENCE
The famous illustrious tabi, Imam Shu’bah said, “The hadeeth of the Messenger of Allaah (Sallalahu Alayhee Wasallam) these people narrates to you then hold onto them and whatsoever they tell you from their own opinion (in opposition to the Quraan and Sunnah) then reject it by throwing it on the pile of dirt.” (Musnad ad-Darimi (1/67 no.206) its chain is authentic, also refer to The Issue of Doing Taqlid in the Deen (pg.37).

There is no evidence from a single ta’bi that they allowed or obligated taqlid, therefore it is clearly evident from this and other similar statements that there is ijma ie unanimous agreement in the prohibition of taqlid. This is a clear evidence that all the trustworthy tabieen who had sound Aqeedah were Ahlul Hadeeth.

THE THIRD EVIDENCE
Hakam bin Utaibah from the taba tabieen said, “Everyone’s statement can be accepted and rejected except the Messenger of Allaahs (Sallalahu Alayhee Wasallam)” (al-Ahkam (6/293) of Ibn Hazm and its chain is authentic)

THE FOURTH EVIDENCE
A group from amongst the people following the way of the taba taabi’een have prohibited taqlid, for example Imam Abu Abdullah Muhammad bin Idrees ash-Shafi prohibited the people from doing his taqlid and the taqlid of others. (Refer to Mukhtasar al-Muzani (pg.1)

Imam Shafi also said, “And do not do taqlid of me.” (Adab Wa Manaqib ash-Shafi (pg.51) Of Ibn Abi Hatim, and its chain is Hasan)

Imam Ahmad said, “Do not do taqlid of anyone of them (referring to the other imams) in your deen.” (Masail Abi Dawud (pg.277)

An authentic hadeeth mentions the taifah mansoorah (the aided group) will always remain upon the truth. In explanation of this hadeeth Imam Bukhari said, “This refers to and means the Ahlul Hadeeth.” (Masalah al-Ehtijaj Ba Shafi (pg.47) of Khateeb al-Baghdadi, and its chain is authentic)

Imam Qutaibah ibn Saeed said, “If you see a person loving the Ahlul Hadeeth then he is follower of the Sunnah.” (Sharf Ashabul Hadeeth pg.134 no.143 of Khateeb Baghdadi, its chain is authentic)

Imam Ahmad bin Sinan al-Wasiti said, “There is no innovator in the world who does not have hatred for the Ahlul Hadeeth.” (Marifah Ulum al-Hadith p.4, of Imam Hakim, its chain is authentic)

For further quotes refer to the monthly al-Hadith issue no.29 p.13-33

So we find all the trustworthy followers of taba tabieen who had sound Aqeedah were Ahlul Hadeeth and did not do taqlid and in fact used to also warns others from taqlid.

[Taken from Academic, Cultivating and Scholarly Treatises (pg.175+) of Shaikh Zubair Ali Zai and abridged by us)