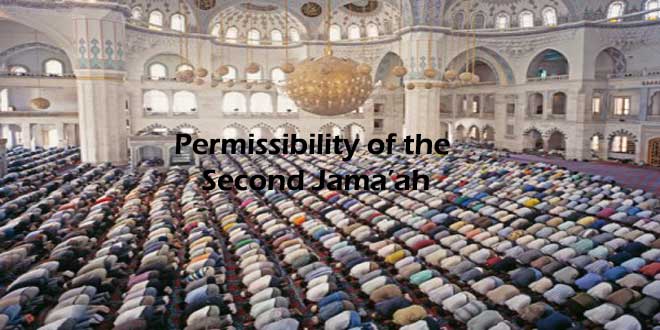 The Permissibility of the Second Jama’ah

When the first Jama’ah in the Masjid is finished and later more people arrive can they make a second Jamaah and pray? What is the ruling according to the book and the sunnah?

Where as it is the saying of Ahnaf Ashaab Ur-Rayy (The companions of the people of opinion) that it is Makrooh Tahreemi like it has been mentioned in Fataawa Shaamee. (Of Ibn Aabideen (10th Century Hijree)

The Hadeeth of Abu Sa’eed al-Khudree was considered Hasan by Imaam Tirmidhee and Imaam Haakim, Dhahabee and Ibn Hazm said it was Saheeh. Imaam Baghawee said after this Hadeeth in his book Sharh us-Sunnah, “This Hadeeth proves (Abu Saeed Al Khudri) that the individual who prayed in the Jamaah once, it is permissible for him to pray with other people a second time. Like wise it is permissible to establish the second Jamaah. This is the saying of many Companions and great Taab’ieen.”

Imaam Ibn Qudamaah said, “Repeating The Jamaah in the masjid is not Makrooh (Disliked), it means that when the Imaam of the local Masjid has finished the congregational prayer and the people for the second Jamaah are present, then it is Mustahab (Recommended) for them to pray in congregation. This is the saying of Abdullah Ibn Mas’ood, Ataa, Nakh’aee, Hasan, Qataadah and Ishaaq Ibn Rahawaihah” (Al-Mugnee (3/10)

After this Imaam Ibn Qudaamah also mentioned the Hadeeth of Abu Sa’eed.

In the same way the Hadeeth of Abdullah Ibn Umar (Radhiallaahu Anhu) mentions the reward of 27 times. (Bukhaari with Fath al-Baari (2/131).

This Hadeeth in its generality includes the first and second Jamaah from which we find out that if the first Jamaah of a person is finished then he can offer his prayer with the second Jamaah and obtain the reward.

“Abdullah Ibn Mas’ood entered the Masjid and the people had prayed, so he led Alqamah, Masrooq and Aswad in prayer.” (Ibn Abee Shaybah, Ibkaar al-Manan (p. 253) Its chain is authentic, Mir’aah Sharh Mishkaat (4/104)

From these Ahadeeth and Aathaar we find that performing the second Jamaah in the Masjid is permissible without and this was the position of the Major Companions.

The Proofs of those who consider it Makrooh.
It is narrated from Abu Bakrah “The Messenger came from the outskirts of Madinah and he wanted to offer the prayer. He observed that the people had offered their prayers. So he went to his house and gathered his family members and then prayed with them.” (al-Kaamil Li Ibn Adiyy (6/2398), Majma’a Az-Zawaa’id (2/48), Tabaranee al-Awsat (no. 4379),

The conclusion that is drawn form this Hadeeth is that if the second Jamaah was permissible then the Messenger of Allaah would not have abandoned the virtues of praying in the Masjid ie he would have prayed in the Masjid because the reward is greater in praying in the Prophets Masjid than in a normal Masjid.

FIRSTLY
Al-Allaamah, al-Muhaddith, Shaykh ul-Hindh Ubaidullaah Rahmaanee and Mubaarakpooree said concerning this, “Taking this as a proof for the prohibition (Ie it being Makrooh) of the second Jamaah in the Masjid is objectionable, because this Hadeeth is not a text for him leading them in prayer in his house rather there is also the question that he may have led them in prayer in the Masjid. His going to his house was for gathering his family members, not for doing the Jamaah. (see Miraat)

If it is accepted that he did lead his family members in prayer at his house, then it still does not prove the prohibition for performing the second Jamaah but the deductive point that is proven is that if a man was to go to a Masjid where the Jamaah had finished then he should not pray in the Masjid but rather he should go home and pray with his family.

Any way saying that praying in a second Jamaah is Makrooh (disliked) is not proven from this Hadeeth like it does not prove the prohibition of the individual person who comes to pray in the Masjid (after the Jamaah is finished). If this Hadeeth is taken for the second Jamaah being Makrooh, then this also proves that the individual person must not pray in the Masjid.” (Mir’aat, The Sharh of Mishkaat (4/105)

SECONDLY
The saying of Al-Imaam Al-Muhaddith Abu Abdur-Rahmaan Muhammad Naasir ud deen al-Albaanee (Alyhee Rahamatullaah) that the chain of this Hadeeth is “Hasan”, is objectionable because one of the narrator of the Hadeeth “Baqiyyah Ibn Waleed” is a Mudallis and he would perform “Tadless at-Taswiyyah” which is a big form of Tadlees and his hearing (from the teachers or Shuyookh) is not continuously clear.

Tadlees at-Taswiyyah, is A Tadlees of the Isnaad and it is defined as, when there are three narrators, for example the first one is reliable and trustworthy, the second narrator is Daeef and the third one is reliable and trustworthy. A Mudallis of the Taswiyyah type omits the second person (The Da’eef one) from the chain and mentions the name of the 1st and 2nd person only. (See Al-Kifaayah Fee Ilm Ar-Rawayah (p.364), Nawawee in Al-Irshaad (p.94), Haafidh Araqee in At-Taqayyid Wal-Aeydah (pp.95-96) who also said this is the worst type of Tadlees)

The Stronger Opinion Regarding of Baqiyyah Ibn Waleed.

Imaam Dhahabee quotes, that Abul Hasan Ibn Qattaan said, “Baqiyyah would perform Tadlees from Da’eef people and would hold it permissible and if this correctly proven from him, then this is such an action that it will make his trustworthiness Faasid (Null and void). Imaam Dhahabee writes concerning him “By Allaah this is correct concerning him, that he would do this.” (Meezaan (1/339), Tahdheeb (1/419)

Imaam Ibn Hazm said, “Such an individual is a fabricator and is open Fisq, it is therefore Waajib to throw away all his AHadeeth whether Tadlees is reported in them or not, even if he says he heard….All his narration’s are rejected and not accepted and his trustworthiness is exterminated because he deceives the people of Islaam.” Imaam Sakhawee said, “From amongst these people is Baqiyyah Ibn Waleed.” (Al-Ahkaam Fee Usool al-Ahkaam (1/142), Fath al-Mugheeth (1/227) of Sakhawee.

Imaam Haakim says, “Baqiyyah Ibn Waleed has narrated such Ahadeeth from the creation of Allaah that their Names, lineage, reliability are untraceable.” (Ma’arifah Uloom al-Hadeeth (p. 132)

Dhahabee said, “Baqiyyah is the person of weird, odd and munkar narrations. Abdul Haqq has said he is not proof in many narrations” (Meezaan (1/332)

Abu MusHar (d. 210H) who was a great Scholar of Hadeeth from Shaam, He was put through a lot of trials for rejecting the Aqeedah of the creation of the Qur’aan by the Khaaliph. (See Tareekh al-Baghdaad (11/72) of Khateeb, Al-Ibar Fee Khabar Min Ghabar (1/374) of Dhahabee, Tadhkirrah Tal-Huffaadh (1/381) of Dhahabee, Tahdheeb at-Tahdheeb (6/98) of Ibn Hajr

The narration of Abdullah Ibn Mas’ood from Ibraaheem that Alqamah al-Aswad went with Ibn Mas’ood to the masjid where they found the people had already prayed, so he took them back to the house, where he led them in prayer.” “Abdur-Razzaaq (2/409 no. 3883) from him Tabaraanee in Mu’jam al-Kabeer no.9380)

This narration contains Hamaad Ibn Abee Suleimaan who was forgetful (See Majma Az-Zawaa’id (1/119, 120) and a also a Mudallis, (Tabaqaat al-Mudalliseen). This narration is like “on the authority, on the authority of” ie Aan Aan and such a narration is Da’eef. So only three narrators are taken as proof before the forgetting of Hamaad, Allaamah Haithamee said, “The narrations of Hamaad that will be accepted are those which were narrated from him by narrators, before his forgetting. For example Shu’bah, Sufyaan ath-Thawree and Hishaam Dastawai, and whoever apart from them (Ie these three) narrates from him will be after his forgetting.” (Majma az-Zawaa’id (1/125).

Approximately this has also been mentioned by Imaam Ahmad Ibn Hanbal (See Sharh Elal Tirmidhee of Ibn Rajab p.326). Mu’amar narrated this from Hamaad therefore it is not a proof.

Shaykh Ubaidullaah Rehmaanee (Rahimahullaah) said, “According to us the better opinion is that if a person reached the masjid and the Jamaah with the established Imaam had elapsed and he did not pray due to a reason, then it is permissible and Mubah (Recommended) that he pray with the second Jamaah.” (Mir’aat, The Sharh of Mishkaat (4/107)