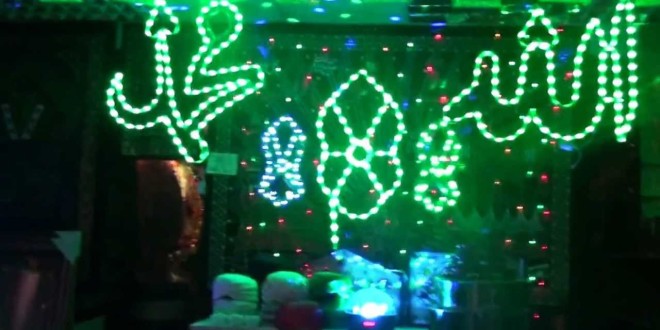 READ PREVIOUS PART  – The Mawlid Papers – Part 36 – Fact not Fiction: The Mawlid Was Not Celebrated by the Salaf us-Saleh; A Reply to the Barelwi Asrar Rashid

“When Umar bin Al-Hasan famously known as Abū Khattāb bin Dahiyyah whilst on his travels to Khurasān in 604H visited Irbil he saw the the kind Malik Mu’azam Muzaffar Al-Dīn bin Zain Al-Dīn was liked the Mawlid Al-Nabi. So with the intention of pleasing the king he authored a book called ‘al-Tanwīr Fī Mawlid Al-Sirāj Al-Munīr’ which he read to the King himself. When he authored the book, Malik Mu’azam gave him 1000 Dinars.” [Ahsan Al-Kalām Fimā Yata‘laq Bil-Sunnah Wa’l Bid‘ah Minal Ahkām [pp.70]

A Sufi authored a book whilst hiding the truth and cloaking it with futile interpretations in establishing and the virtue of the Mawlid. He called it “Al-Tanwīr Fi Mawlid Al-Bashir an-Nazir” and eventually received 1000 dinars. Refer to Al-Bidāyah wan Nihāyah (13:124), Al-Hawī lil-Fatâwa (1:189), Wafyat al-A’yān (4:119).

The sufi’s full name was Umar bin Al-Hasan Abu Khatāb Dahiyyah Andalusī. As for his affair Imām Dhahabī said about him,

“I did not like his affair in that he would tarnish the Imāms and then Ibrahim Sanhawari  informed that the scholars of Maghrib wrote concerning him in that they criticised and weakened him.” [Mizān [3:186]

“I saw that the people were united and agreed on him being a liar and weak, likewise and similarly his claim the people he heard from when he never heard from them and those who he claimed to have met when he never met them.” [Liīsān Al-Mizān [4:295]

“He was of the Zahiri madhab who would tarnish and degrade the honour of Imāms and Scholars of the Salaf, he had a vile tongue, he was a fool with utmost arrogance and very little insight in the affairs of the Dīn and very lazy.” [Līsān Al-Mizān [4:296]

Some researchers have speculated his attribution to the Zahiri Madhab was due to his Andalusian roots, where the Zahiri Madhab featured prominently. They also said the Maliki’s at the time conformed to their roots and adhered to the thoughts of the school in Fiqh and otherwise. Likewise the concept of any offshoot from the norm in those days would be attributed to the Zahiri Madhab due to its approach of independent reasoning.

This does not however mean he was a propagator of the madhab. This is often the case, you will find ardent Sufi’s claiming to be Zahiri’s or an an attribution to the Zahiri Madhab because of their need to be free and independent of the legislated rulings, however this is a direct contradiction of the Zahiri Madhab, which is strict adherence and rigorously conform to the Divine Texts.

“Besides his knowledge and memory he was very immature in citing texts. He would make bold audacious claims and would say ‘he narrated to us’ in his ijazahs.” [Tabaqāt al-Huffāz [pp.498]

He goes onto says,

“When the 12th of Rabī Al-Awwal would come they would prepare sweet dishes from 20 plates of sugar which would then be put on 300 silver plates and this would be the day of the Mawlid.” [al-Muwā’iz wa’l Ei‘tibār Bi Zikr al-Khitat wa’l Athār [2:334]