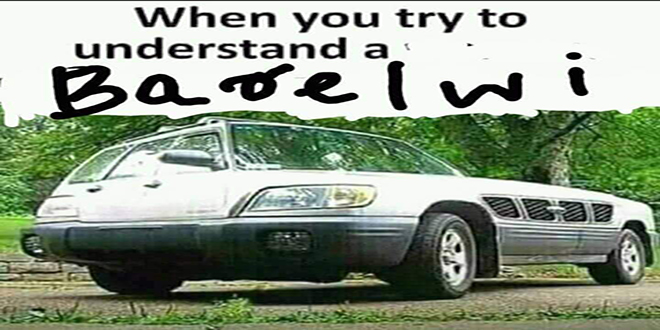 The Mawlid Papers – Part 36 – Fact not Fiction: The Mawlid Was Not Celebrated by the Salaf us-Saleh; A Reply to the Barelwi Asrar Rashid

The Sufi Barelwi’s also known as Raza Khani’s, in a desperate attempt to salvage some misdirected credibility organised a lecture in Luton on Sunday 26th November 2017 at Luton Central Mosque. This was undoubtedly organised in spite of the lecture the Salafi’s of Luton had scheduled on the same day at Luton Islamic Centre titled ‘Mawlid un Nabi – To Celebrate or Not’

The Raza Khani Sufi Barelwi’s in anger scheduled a lecture titled, ‘Mawlid – Fact not Fiction’ and they invited none other than a disgraced and shambled speaker, who in the past year had been remorsefully recovering from a severe and dismal defeat in a debate.

The deluded individual had duped himself and his ardent blind followers in thinking they could use divine texts revealed by Allah, to justify and evidence the worship and calling upon other than Allah, It did not make any sense to any mature, sensible and sane individual to even think you could use the words of the creator and the words of his chosen Messenger of Allah ﷺ to prove calling upon others, but how can you help those who refuse to think and ponder? We are talking about none other than the Barelwi Sufi Asrar Rashid.

The same individual in other lectures refers to us, i.e. Salafis as Pseudo Salafis as if this was some kind of obscene swear or a derogatory remark, which will have the desired affect of defamation or degradation. However it does and will have repercussions, and that is we will aptly and happily refer to these Barelwi Sufis as Raza Khani’s i.e. on the Religion of Ahmad Raza, Rida, Riddah or whatever the Riz Raz Khan he was. Likewise and similarly do not be squeamish or be remotely offended when we start referring to you as Lahabi’s!!!

Perhaps, inshAllah we can analyse the lecture itself at a different time but what we found most repugnant was the title of ‘Fact not Fiction,’ implying the celebrating of the Mawlid is a something factual, which is obviously ludicrously insane because the Mawlid is a clear, manifest and absolute innovation, a Bid’ah

What we would like to do, is to see whether the Mawlid is factual or  actually a fiction based on the statements of the Sufi Barelwi Raza Khani’s Church fathers.

You can often hear Asrar Rashid venerating and praising his Barelwi church father, Ahmad Rida Khan in numerous videos and in this regards holds him high esteem and respect. The same Ahmad Raza Khan himself declared the 12th of Rabi ul-Awwal to be the day the Messenger of Allah ﷺ died. He said the Messenger of Allah ﷺ was born and also died on 12th of Rabi ul-Awwal (Malfuzat 2:220).

So we ask these Mawlid lovers, are you astagfirullah celebrating the birth or death of the Messenger of Allah ﷺ!!! Now let the average Barelwi adherent and sympathiser claim he is celebrating the death of the Messenger of Allah ﷺ, this is indeed from the evil tricks of the cursed  Ibis and the shayatin from amongst men. Is this what you call Mawlid – Fact not fiction, Astagfiruallh!

This is the problem, that these people do not for a moment think logically with their brains which Allah, from his mercy and blessings bestowed upon them. for how long will you remain ignorant and hide behind those to feign knowledge of the sacred sciences, there is no excuse, and fear the day when your leaders and guides will be exposed for taking you away from the Quran and Sunnah.

The Barailwi author and defender of the Mawlid, Abdul-Sam’i Rampuri clearly says the Mawlid gatherings were conducted in the sixth (6th) century of Islam, he says.

“The Mawlid gatherings which were organised at the end of the sixth (6th) century were considered to be good by the scholars and honourable people.” (Anwar Sati’a Dar Bayan Mawlud  wa Fatihah p.50)

See the scan below from the original Anwar, 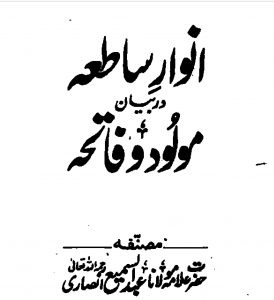 “The selling of goods and products (related to Milad –  i.e. christmas milad trees, milad cakes, milad lights and HALWA) and with it being specific to the month of Rabi ul-Awwal and then further restricting and designating the 12th day for Milad was practised in later times i.e. at the end of the Sixth (6th) century.” (Anwar Sati’a p.159)

There was no Mawlid or a third Eīd during the first centuries of Islam, including the era of the companions, the Tabi’in and the Atba Tabi’in, ie the first three generations, what we abbreviate to the Salaf us-Saleh, nor during the period of the great Imāms.

“The Milād was not celebrated by anyone in the first three generations, it was introduced (innovated) later on.” (Ja’a al-Haq 1:235)

Another Sufi Barelwi church father, Didar Ali, who is held with great esteem also acknowledged and affirmed there was no evidence for Mawlid during the first generation and the Salaf us-Salihin was in fact introduced (innovated/fabricated) later. (Rasul al-Kalam Fi Bayan al-Mawlid wal-Qiyam p.15)

“I say: the Salaf us-Salihin meaning the Sahabah and the Tabi’in did not practise or organise Milad gatherings, and this is correct, however neither did the Sahabah or Tabi’in prohibit it” (Sharh Sahih Muslim 3:179) 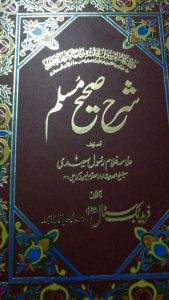 The intent here is to show the Mawlid was not practised in the first three blessed generations i.e.  during the time of the companions, successors and their successors i.e. the Salaf us-Saleh. When not a single one of them practised the Mawlid, it shows they were unanimous in its prohibition and that it was an alien concept, so Ghulam Rasool Saeedis assertion they did not prohibit it, is  a very lame and poor line of argument.

Furthermore, this shows none of the other Sahabah or Tabi’in practised the Mawlid, because if they had they would been warned and prohibited from doing so by the other Sahabah and Tabi’in, therefore the last part of the statement of Ghulam Rasool Saeedi is a proof for us.

The Sahabah and Tabi’in would not have needed to warn from the Mawlid because they had been instructed by the Messenger of Allah ﷺ not to exaggerate in praise of him like the christians did with Isa Alayhis Salam and they were people who follow the Messenger of Allah ﷺ in totality without following their whims and desires like the Sufi Barelwis do.

Who is Ghulam Rasool Saeedi, well he is someone who the Sufi Barelwis revere due to his knowledge of hadith, he is well respected and has a venerable position with them. He cites an important principle which the sufi Barailwis abhorrently desecrate, he said

“In this regard the correct principle is that any specific act of worship that is to be practised, and there are no preventative factors and despite this the Messenger of Allah ﷺ deliberately abandoned it, then performing such an act is indeed with certainly impermissible and an act of innovation (bid’ah).” (Sharh Sahih Muslim 2:545)

Dear readers, this is the FACT Asrar Rashid and his Barelwi sect would like you to believe, knowing very well their scholars and church fathers were agreed the Mawlid was not celebrated or practised during the first three blessed generations i.e. the Salaf us-Salihun as Asrar Rashid often says.

The real FACT is, the Salaf us-Saleh, the Sahabah, Tabi’in and Atba Tabi’in did not celebrate the Mawlid so stop following yourselves and misguiding others.