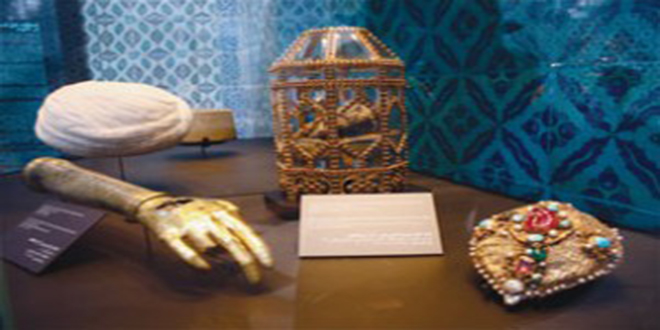 It is impermissible to seek blessing from the relics of anyone other than the Prophet of Allah ﷺ, for example the water remaining after wudu, his hair, his sweat or any other part of the body. All of these things are specific and restricted to the Messenger of Allah ﷺ and this is because Allah had blessed his body and anything else that he touched. This is the reason why no companion sought blessing or virtue from each other during the lifetime of the Messenger of Allah ﷺ or after his death, even to the extent that blessings or tabarruk was not sought from the four rightly guided Khulafa Rashidun or from the other virtuous companions.

Therefore, such actions and the understanding of the companions is a clear and manifest evidence they understood tabarruk ie blessings to be specific and restricted to the Messenger of Allah ﷺ which was impermissible for anyone else. It is also impermissible for anyone who is not a Prophet because it leads to and is a means to Shirk with Allah which is also the false worship of others. Likewise, and similarly it is not correct to make wasilah of the essence or selfness of Prophet ie dhat, his attributes, his blessings, his station and status because it lacks evidence. This is also due to the fact that it is a means and also leads to Shirk with Allah, this is extremism as well as exaggeration in the status and station of the Messenger of Allah ﷺ.

Apart from Allahs name, it is permissible to make wasilah through his attributes like honour, mercy and speech which is established and proven from the authentic hadith, in which the Messenger of Allah ﷺ would seek refuge in Allah through his Speech, Honour, Mercy and Power. (Muslim no.2202, 2708).

Also by having Iman in Allah and his Messenger, it is a means of loving both. Hence it is permissible to seek nearness or closeness to Allah via his righteous good deeds. This is exemplified in the incidence of the people of the cave, who sought shelter in a cave from rain when eventually a rock covered the entrance and blocked it. The people did not have the power to remove the rock, so they began to figure out a way in how to deal with the calamity, and so they agreed to supplicate to Allah by mentioning the good deeds they had done, and would use them as interecessors. So one used his good conducts with is parents as a means to seek nearness to Allah, so the rock moved a little. The second person used his deed of abstaining from fornication as a means to seeking closeness to Allah despite having the ability to do so, so the rocked moved a little more. The third person sought means of closeness by mentioning his good deeds of being honest and trustworthy, eventually the rocked moved from the entrance of the cave and they were eventually able to leave. This is an incident of the people or nations before, so It contains admonition and guidance for us all.

This answer has been further expounded by Shaykh ul-Islam Ibn Taymiyyah and his student Ibn al-Qayyim in their respective books. Allamah Abd al-Rahman ibn Hasan has also addressed it in his Fath al-Majid Sharh Kitab al-Tawhid.

As for the hadith of the blind man who sought intercession through the Prophet ﷺ which also mentions the Prophet ﷺ interceded on his behalf, so Allah restored his sight (Ahmad 4:134, Tirmidhi no.3579, Ibn Majah 1404, see also Shaikh al-Albani’s al-Tawassul wal-Wasilah p.75)

So we should know, this hadith did not mention his station or status as a means of closeness or intercession but rather it was due to the supplication of the Prophet of Allah ﷺ, his intercession, using his own wasitah and wasilah as the hadith clearly states. Furthermore, the people will go to the Messenger of Allah ﷺ for this type of intercession on the Day of Judgement so that Allah makes Judgement on them quickly (Bukhari 7410, Muslim 193).

Likewise, and similarly the people of Jannah will come to the Messenger of Allah ﷺ and ask him to intercede with Allah on their behalf for them to enter Jannah quickly (Muslim 196).