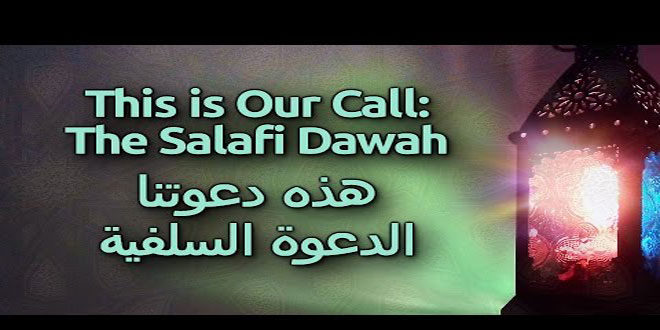 An Introduction To Salafi Da’wah

The Salafi Da’wah is that of the Qur’an and the Sunnah. It is the Religion of Islam – pure and free from any additions, deletions or alterations. It is to adhere to the Path of the Messenger (sallallahu ‘alaihi wa sallam) and of the True Believers (as-Salaf us-Salih). As-Salaf is a collective term referring to the Pious Pioneers in Islam and all those who follow in their footsteps in belief, actions and morals.

Allah has said (what means): Whoever contends with and contradicts the Messenger after guidance has been clearly conveyed to him, and follows a path other than that of the Faithful Believers, We shall leave him in the Path he has chosen and land him in Hell, what an evil destination! [An Nisa 4:115].

Who are the “Salaf?”

As-Salaf us-Salih (or briefly: the Salaf) refers to the first and best three generations of Muslims. They are the Companions (Sahabah) of the Prophet (S), their immediate followers (Tabiun), and the followers of the Tabi’in. These were praised by the Prophet (S): The best of people is my generation, then those who come after them, then those who come after them [Bukhari and Muslim]. The term Salaf applies also to the Scholars of Ahl us-Sunnah wal-Jama’ah after the first three blessed generations who followed their way in belief and practices.

Allah (T) said (what means): The first to embrace Islam of the Muhajirin (those who migrated from Makkah to al-Madinah in obedience to Allah) and the Ansar (the citizens of al-Madinah who gave aid to the Muhajirin), and also those who follow them in the best way; Allah is well pleased with them, and they are with Him [At-Tawbah 9:100].

Who are the “Salafis?”

The description “Salafi” applies to one who truly attaches himself to the Salaf. This attachment is not to an arbitrary single person or group of people. It is an attachment to that which will never err – to the guidance of Muhammad (S), his Sahabai, and their true followers. Likewise, Salafiyyah (the Salafi Da’wah) is not blind following of any particular Shaikh or Imam. It is adherence to the Qur’an and Sunnah as understood and practiced collectively by as-Salaf as-Salih. A true Salafi values Tawhid, singling out Allah in all acts of worship: in supplication, in seeking aid, in seeking refuge in times of ease and hardship, in sacrifice, in making vows, in fearing and hoping and total reliance, and so on. A true Salafi actively seeks to remove shirk (polytheism) with all his capacity. He knows that victory is not possible without true Tawhid, and that shirk cannot be fought with the likes of it (i.e., with another form of shirk). A true Salafi adheres to the Sunnah of the Prophet (S) and of his companions after him.

The Prophet (S) said, Adhere very closely to my Sunnah and the Sunnah of the rightly guided successors after me; bite on to it with your molar teeth, and beware of the newly invented matters. [Authentic; recorded by Abu Dawud and at-Tirmidthi. Whenever there is a difference of opinion, a true Salafi refers matters to Allah and His Prophet (S), acting in accordance with the ayah: If you differ in anything among yourselves, refer it to Allah and His Messenger if you do believe in Allah and the Last Day, that is better and more suitable for final determination [An-Nisa 4:59]. He gives precedence to the Word of Allah and of His Prophet (S) over the opinion of anyone else, in according with the ayah: Believers! Do not put your opinions forward ahead of Allah and His Messenger, and fear Allah. Verily Allah is All-Hearing and All-Knowing. [Al-Hujurat 49:1].

A true Salafi revives the Sunnah of the Prophet (S) in his worship and behavior. This makes him a stranger among people, as the Prophet (S) has described: Islam began as a stranger, and it will revert to being a stranger just as it began. So give glad tidings to the strangers. [Recorded by Muslim]. And he (S) said in another narration: So give glad tidings to the few, those who purify and correct what the people have corrupted of my Sunnah. [Authentic; al-Albani’s as-Silsilat us-Sahihah number 1273].

A true Salalfi enjoins the good and forbids the evil. He warns people, out of deep concern, about shirk, innovations, misguided ways, and of deviant, destructive groups: Let there arise out of you a band of people inviting to all that is good, enjoining what is right and forbidding what is wrong [Aal Imran 3: 104].

A true Salafi constantly seeks Allah’s forgiveness, makes true repentance, remembers Allah abundantly, and rushes to perform the righteous deeds in order to purify his soul. Thus he attempts to follow the ayah: Truly he succeeds who purifies it (i.e., the soul) [Ash-Shams 91:8].

A true .Salafi worships Allah out of a combination of Fear, Hope and Love. Allah says (what means): Call upon Him, with Fear and Hope. [Al-Araf 7:56]. And He says (what means): There are people who take [for worship] alleged rivals to Allah, loving them as only Allah should be loved. But the Believers love Allah more than all else. [Al-Baqarah 2:165].

Thus the true Salafs are Ahl us-Sunnati wal-Jamaah. They are at-Ta’ifat ul-Mansurah (the Aided, Victorious Group) and al-Firqat un-Najiyah (the Saved Party) which have been described in several hadiths. The Messenger (S) said: A group from my Ummah (nation or community) will always be aided with victory as they continue to persevere upon the Truth; they will not be harmed by those who abandon them or those who oppose them. [Recorded by Muslim]. And he (S) said: This Ummah will split into seventy three parties, all of which will go to Hell – except for one party: the one which will follow the same path as what I and my companions are following today.[Authentic; recorded by Abu Dawud, at-Tirmidthi, and others]. In one report he (S) described this Saved Party as: …except for one party, which is the Jama’ah.

Upon comprehending this, a Muslim has no option but to be salafi. In doing so he attaches himself to that group which has been guaranteed success, victory, salvation and safety from the Fire.

The Fundamental Principles of the Salafi Da’wah

The Salafi Da’wah stands upon the principles of Tawhid and Tazkiyah.

Tawhid means to accept and believe in the oneness of Allah (T) and in the uniqueness of His Message. It means to worship Allah (T) alone, and to worship Him in accordance with His legislation. Tawhid encompasses the following principles:

The Salafi Manhaj (methodology) maintains that these forms of Tawhid are inseparable from one another. They are the essence of the meaning of the testimony: “La ilaiha illa ‘Llah, Muhammadun Rasulu ‘Llah” (There is none worthy of being worshipped except Allah, and Muhammad is Allah’s Messenger). The Salafi methodology places special emphasis on the Tawhid of Ittiba’ because of the general tendency among many Muslims to neglect it. Thus it emphasizes the following items.

It is unfortunate that true adherence to the Way of the Prophet (S) has weakened in the Ummah and true love for him has all but disappeared because of:

Tazkiyah, on the other hand, means to be purified or to purify oneself by adhering to Allah’s commands. In its best form, it would be to worship Him with complete surrender, submission, and devotion. This is a great favor that Allah (T) bestowed on this Urnmah. Allah did confer a great favor upon the believers when He sent a Messenger (i.e., Muhammad (S)) from amongst themselves reciting unto them His signs (i.e., the Quran) and purifying them (from sins and ignorance by adopting his way) and instructing them in the Book (the Quran) and Wisdom (the Sunnah) while before they had been in manifest error. [Al ‘Imran 3:164]. The following points should help clarify the true meaning of Tazkiyah.

The Aims and Objectives of the Salafi Da’wah

The Salafi Da’wah is not a political party or a new madth’hab. Rather, the Salafi da’wah is that of Islam in its totality, addressing all humanity irrespective of culture, race, or color. It is the complete and perfect methodology of understanding Islam and acting according to its teachings.

Consequently, the aims of the Salafi Da’wah are no different than those of the Da’wah of Islam. Therefore the Salafis remain distinct from the various sects and groups in the way and methodology of their Da’wah. They call to Islam as a whole – to its correct understanding and implementation. Misguided groups and deviant sects emphasize and call to particular aspects of Islam, thereby neglecting its other aspects to suit their own needs, as well as losing sight of the purpose and perspective for which they have been created; which is, as Allah has stated (meaning): I have not created Jinn and people except (for this purpose): that they may worship Me. [Adth-Dthariyat 51:56]. And He has said (what means): And they were not commanded except with this: that they should worship Allah (alone), being sincere in His Din and being Hanifs (upright, true and conscientiously turning away from Shirk). [Al-Bayyinah 98:5]. This, in essence, is the call of all the Prophets: calling to the Tawhid of Allah, to the annihilation of shirk, to sincerity in His worship, to obedience to His Messengers, and to adherence to their way. This is also the essence of the Salafi Da’wah. This can further be itemized into the following practical objectives:

We call upon all Muslims to support us in carrying out this noble trust which will surely elevate and honor them and spread the eternal message of Islam all over earth. Allah (T) has promised this, and His promise is surely true: He it is who has sent forth His Messenger with [the task of spreading] guidance and the religion of truth, in order to make it prevail over all [false] religion, however hateful this may be to those who ascribe divinity to aught but Allah. [As-Saff 61:9]

Misconceptions about the Salafi Da’wah

There following are is a number of misconceptions about the Salafi Da’wah:

We ask Allah (ta’ala) to guide us to the truth, to steady our feet, and to forgive our shortcomings.