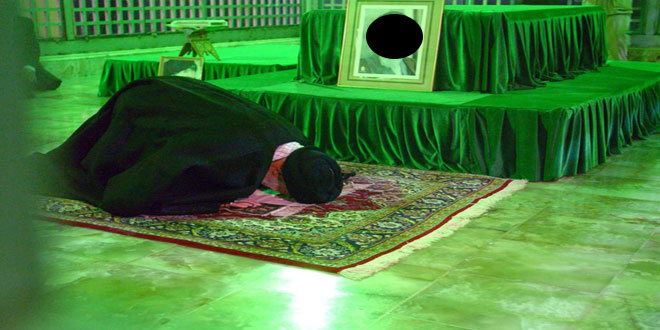 Allaah has commanded that one should prostrate to Him Alone. He said:

“O you who believe! Bow down, prostrate, and worship you Lord. Do good so that perhaps you will be successful.” (Al-Hajj 22:77)

“And from His signs are the night, the day, the sun and the moon; do not prostrate to the sun nor to the moon, but prostrate to Allaah who has created them if it is He Whom you worship.” (Al-Fusilat 41:37)

In spite of all that, we find the Raafidah-and their brothers, the extreme Soofees share with them in this-prostrating upon the graves of their Imaams. Even though they call this prostration إنكباب (devotion), changing the names of thins does not change their realities in the least. They do at the graves that which Allaah does not like to be given to any except Him, from displaying humility, lowliness, fear, turning in repentance, seeking help and other than that from that which displays subservience. Here are some narrations in this regard; and Allaah’s Aid is sought:

They narrated from Ja’far As-Saadiq that he said regarding that which is befitting for the one who visits the grave of Al-Husayn that he ordered him, before beginning this visit, to fast for three days then perform Ghusl and put on two clean garments; then pray two Rak’ahs and he said:

“When you come to the gate stand outside of the shrine and turn your glance towards the direction of the grave and say: ‘O my patron, O Aboo Abdullaah, on son of Allaah’s Messenger; your slave, the son of your male slave and the son of your female slave stands in humility before you; deficient within the loftiness of your status; acknowledging your right; coming to you seeking refuge in your custody, with intentions toward your sacred (precincts), facing your station…’”

(Up to his statement):

Source: Excerpted from “A Gift to the Sunni in demolishing the Creed of The Shi’ah”