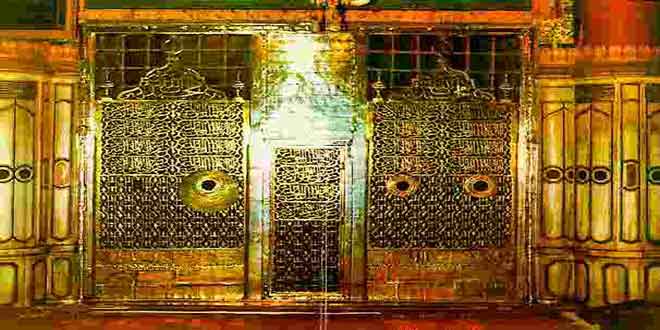 (Protecting The Human From The Satanic Whisperings of Shaikh Dahlan)

“It is rejecting the legislative evidences on the basis of bad thoughts.”

By Subki saying this he has suppressed the truth but rather confused it. He has left the prophetic texts, the legislative principles, decisive and specific texts for the unrestricted, general and unclear ones, just as the people of desires always do and we shall clarify this with the permission of Allah.

We are prohibited from venerating the grave of the Messenger of Allah (Sallalahu Alayhi Wasallam) which leads to shirk or if it is shirk itself. For example praying near the grave, making it a place of prostration and lighting candles near it, undertaking a journey to it and organising gatherings and events near it. Such prohibitions are well established in the authentic, clear and decisive narrations. Such prohibitions with the specific reasons, which are elucidated in the texts are also applicable to the graves of pious people. They are also included in the affairs which have been prohibited and an impetus in spreading shirk

How is it possible for the narrations pertaining to the visitation of the grave to be contradictory, narrations which are not even authentic that allegedly evidence visitation of the grave of the Messenger of Allah (Sallalahu Alayhi Wasallam). We know the Messenger of Allah (Sallalahu Alayhi Wasallam) did not instruct us concerning such visitation and in addition to the fact that we have clear, precise and authentic texts prohibiting this. All of the scholars of Hadith (Muhadithin) and the Hadith specialists did not declare a single narration to be authentic or even used a single one as evidence. On the contrary they declared every narration to be weak due to fabrication and lies.

This also renders Subki’s claim of ijma of the Salaf and Khalaf to be null and void. This is because if he meant by Salaf, the companions, the muhajirin, the ansar and the tabi’in, then without a doubt his claim is an absolute lie. We have mentioned before that it is not established from any companion besides Ibn Umar (RadhiAllahu Anhuma), that they would not visit the Prophets (Sallalahu Alayhi Wasallam) grave and offer Salam after returning from a journey. This is not proven or established from the four rightly guided khulafa and neither did anyone support the practise of Ibn Umar (RadhiAllahu Anhuma) .

Likewise Sa’d bin Ibrahim bin Abd Al-Rahman bin Auf Zuhri was an Imam and the Qadi of Madinah during the era of the Tabi’in, his son Ibrahim said his father would never go near the grave and he would dislike doing this. So can it be said concerning such Imams that they also opposed the ijma? And or abandoned venerating the moa and grossly failed to raise his rank and station? If they say such is the case then this is nothing except something which makes ones hair stand on end.

The grave worshippers have no ijma with them except what the general masses are doing and this was from the time when there was little knowledge and din. This was from a time when the Sunnah had become weak and righteous actions were deemed to be bad and vice versa. For example making the prophets grave celebratory and making Hajj towards it, supplication towards it and making it a pillar of Hajj to visit his grave just like other places are visited as part of the ritual of Hajj like Arafah, Muzdalifah, Jamarat and the places around the Kabah.

This is still instilled in the hearts of the grave worshippers which they do not censure nor prohibit but rather they call to and encourage such practises. Whoever opposes them in this, they label as those who do not venerate and respect the Messenger of Allah (Sallalahu Alayhi Wasallam). This is what we call changing the Din and distorting it, if Allah had not taken the responsibility of preserving the Zikr and that a group of people would always remain upon the truth and that those who attempt to distort the Din will not be able to harm them, then the same would have happened just as the affair was with the people of the book. This is all due to following inauthentic ahadith and abandoning the clear authentic and definitive ahadith.