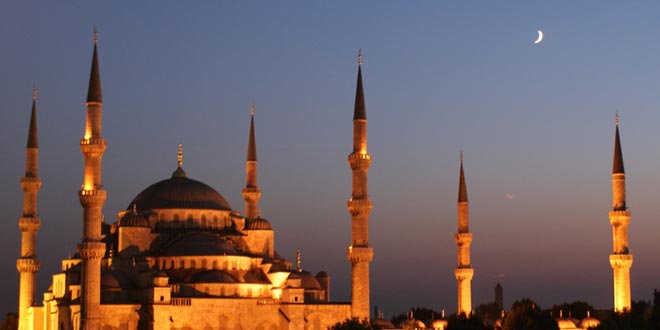 Whether it is the month of Ramadhan or any other month, any month of the year must be commenced and ended with the sighting of the moon. There is absolutely no reliance and dependence on calendars, astronomical calculations and yearly almanacs (which already have the fixed timetables) as the Messenger of Allah (Sallalahu Alayhi Wasallam) said,

The Testimony of Sighting The Moon

The testimony of a trustworthy Muslim is sufficient for sighting the moon in order to commence the month of Ramadhan.

Abdullah ibn Abbas (RadhiAllahu Anhuma) narrates that a dedouin came to the Prophet (Sallalahu Alayhi Wasallam) and said, “I have sighted the moon,” ie the moon of Ramadhan. He asked, “Do you testify that there is no other deity but Allah?” He replied, “Yes.” He again asked, “Do you testify that Muhammad is the Apostle of Allah?” He replied, “Yes.” He (Sallalahu Alayhi Wasallam) said to Bilal, “announce to the people that they must fast tomorrow.” (Sunan Arba [2])

Abdullah Ibn Umar (RadhiAllahu Anhuma) narrated, “The people gathered to see the crescent I informed the Messenger of Allah (Sallalahu Alayhi Wasallam) that I had seen it. He fasted and ordered the people to fast.” (Sunan Arba [3])

Allamah Shawkani said about both ahadith, “Both ahadith prove to accept the testimony of one person for the beginning of Ramadhan.” (Nayl al-Awtar[4])

For the sighting of Eid ul-Fitr and Dhul Hijjah the testimony of two trustworthy Muslim men or one Muslim man and two Muslim women is necessary.

“A man from among the companions of the prophet (Sallalahu alayhi Wasallam) said, “The people differed about sighting of the moon (of Shawwal) on the last day of Ramadhan, then two Bedouin’s  testified before the prophet that they had seen the moon the previous evening. The Messenger of Allah (Sallalahu Alayhi Wasallam) ordered the people to break their fast.  There is an addition to the narration, “and that they go to the musalla in the (following) morning.”(Musnad Ahmad, Abu Dawud [5])

On the authority of Abi Malik al-Ashja’i from Hussain bin Harith al-Jadli that “The governor of Makkah delivered a sermon and said the Messenger of Allah (Sallalahu Alayhi Wasallam) took an oath from us, that we perform our rites after sighting the moon and if we do not sight it, and two just people testify to (seeing ) it. We should perform the rites on the basis of their testimony…” (Abu Dawud [6])

Nawawi said, “It is not permissible to accept the testimony of only one upright (Muslim) in the sighting of the moon for Shawwal (ie Eid ul-Fitr), this is the position of the majority of the scholars except Abu Thawr” [7]

[6] Abu Dawud (no.2338), Darqutni (3/118-119 no.2191-2192) and Imam al-Albani graded it Sahih in Sahih Sunan Abi Dawud (2/54 no.2338) and Shaikh al-Arna’ut said the chain was Hasan in his checking of the Sunan of Abi Dawud. (4/26). Imam Shawkani in Nayl (4/201 no.1622) said,“Transmitted by Abu Dawud and Daraqutni who said its chain is continuous and Sahih….Abu Dawud and Mundhiri remained silent and its narrators are of the Sahih except al-Hussain bin al-Harth al-Jadali who is truthful and Darqutni authenticated it.”