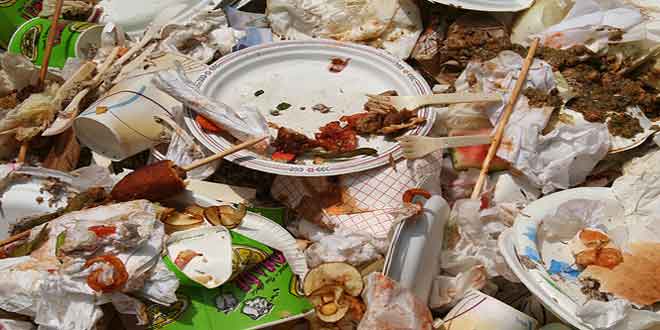 Eating from the deceased’s house on the 3rd, 7th, 14th and on other days according to the Hanafis

’Abdullaah Ibn Ja’far says, when the news of the death of Ja’far (radiyallaahu ’anhu) reached the Messenger of Allaah (SalAllahu Alayhi Wasallam) he said:-

“Prepare food for the House of Ja’far because a thing has come to them that has preoccupied them.” [Aboo Daawood (2/59), at-Tirmidhee (2/173), al-Haakim in al-Mustadrak (1/372), Imaam al-Haakim said this hadeeth is Saheeh and adh-Dhahabee agreed in his checking and Imaam Ibn Sakeen has also said it is Saheeh.] Imaam Shaaf’iee (d.204H) – rahimahullaah – has said: “That I prefer or like for the relatives of the deceased that on the day of the death they prepare so much food for the household that it will last them the day and night so that they are satisfied because this is the Sunnah and it is good, and this is the action of the people of Good before and after us, because when the news of the death of Ja’far reached the Messenger of Allaah (sallallaahu ’alayhi wa sallam) he said prepare food for the House of Ja’far because that thing has come to them that has preoccupied them.” [Kitaabul-Umm (1/317)] Jareer Ibn ’Abdullaah (radiyallaahu ’anhu) (d.51H) said: “We (i.e. the Companions) would consider it a form of lamenting and mourning to gather at the deceased’s house to eat from there” [Related by Ibn Majaah (1/513), Naylul-Awtaar(4/97) and in Muntaqal-Akhbaar (p. 221)]

With another wording it says

“That we would consider it a form of mourning to gather at the deceased’s house and to prepare food after the burial” [Related by Ahmad (11/125-126)] It has come in authentic narrations that crying on the deceased loudly, lamenting and mourning are actions of the people before Islaam and according to the majority of the Salafus-Saaliheen it is unlawful [Imaam Nawawee says there is ijmaa’ (consensus) on it in his Sharh Saheeh Muslim (1/303)] and the same is understood for eating from the deceased’s house,

This narration is narrated via two chains,

“Preparing the food of the deceased and the gathering of the people, then there is no mention of this but it is an innovation and disliked.” [al-Madkhal (3/275) ] And he writes: “Some people have introduced this innovation that on the third day they prepare food at the deceased’s house and this is a norm amongst and within them.” [al-Madkhal(3/275) ]

Imaam Ibn Hajar al-Makkee ash-Shaafi’ee was questioned: “What is the hukm (Ruling) on the food that is prepared in the deceased’s house for the fuqaraa‘ [The poor, destitute] on the third and the seventh day”?He replies

“All the things mentioned in the question all in all of them are prohibited innovations (bida’ mamnoo’ah).”[Fataawaa Kubraa (2/7)]

“The food that is prepared for the people by the deceased’s family is (makrooh) because by this the family is further pushed into trouble and unnecessary pre-occupation and also there is mushabbahah (resembling) the polytheists and the people of ignorance.” [ al-Mughnee (2/413)]

“That this is our madhhab [Meaning the Hanafees] (way) and that of the Shaafi’iyyah and the Hanaabilah.”[Shaamee (1/841)]

As fuqahaa‘ (scholars of Islaamic jurisprudence) from other methodologies have rejected this innovation likewise and in fact even more the fuqahaa‘ of the Ahnaaf have done so.

“To feast from the house of the deceased up until three days is not permissible, because feasting is done only at times of happiness.” [Khulasal-Fataawaa (2/342)]

“In the days of calamity [Loss of a close relative for example] feasting is disliked (makrooh), because the acts that are done during the times of happiness are not appropriate at times of sadness.” [Fataawaa Tataar Khaaniyyah (4/781)]

“Preparing food in the house of the deceased is makrooh (disliked), because feasting is at times of happiness, not sadness and this is a very bad and detestable innovation.” [Fathul-Qadeer (1/473)]

“In those days, preparing food in the deceased’s house and eating the food is makrooh(disliked) as has been mentioned in Hayrul-Fataawaa.” [Jaami’ur-Ramooz (3/443)]

“Preparing food in the deceased’s house up until three days is makrooh.” [Fataawaa Alamgeeree (1/167)] (as has been mentioned in Tataar Khaaniyyah)

“For three days feasting is disliked (makrooh) and so is the food because feasting is at the times of happiness and preparing food on the first, second and third is also makrooh and likewise after a week (seven days) and at the times of ’Eed and also related to this is the taking of food to the graves seasonally is also makrooh. Gathering the reciters and pious for reciting the Qur’ân and after this calling people to eat food is makrooh. Preparing food for the recitation of Soorah’s al-An’aam and al-Ikhlaas is also makrooh and the final word is that preparing food after or for the recitation of the Qur’ân is makrooh.” [Fataawaa Bazzaaziyyah (4/81)]

“The ijtimaa’ (gathering) on the third day specifically is neither fard, waajib, sunnah nor mustahab, neither is there any worldly benefit in it. Nor it is advisable but rather it is an accusation, reviling and blame on theSalaf because they did not mention it but even more dangerous than this is upon the (accusation, blame) Messenger of Allaah (sallallaahu ’alayhi wa sallam) because he did not mention the rights of the deceased and the worst of all is the blame on Allaah because he did not complete the Sharee’ah (And therefore the Religion is dependent on our innovations) whereas Allaah says:“This day I have perfected your Religion for you, completed my favour upon you and chosen for you Islaam as your Religion.” [Sooratul-Maa‘idah [5:3] [From Tahfeemul- Masaa‘il (p. 172)]

“That gathering at the grave on the third day and distributing roses (flowers) and incense and feeding the people within specific days i.e. the third, fifth, ninth, tenth, twentieth, fortieth, sixth month and after a year, then all in all these actions are prohibited innovations (Bida’ mamnoo’ah)” [From Anwaarus-Sati‘a]

“That our madhhab’s (Hanafee) fuqahaa‘ have proven the point that preparing food in the deceased’s house on the first day, third day and after a week is makrooh.” [Mirqaat (5/482)]

And it goes on

OBJECTIONS FROM THE OPPOSITION

They say that eating from the deceased’s house is not impermissible or Makrooh because in Mishkaat al –Masabeeh [(2/544)] a narration comes that when the Messenger if Allaah (SalAllahu Alayhi Wasallam) finished burying a person (Astaqbah da’ee imra’ah) A messenger from the deceased’s wife to the Messenger of Allaah (SalAllahu Alayhi Wasallam) to give him an invitation to eat.

“This hadeeth is a proof for the command for eating from the deceased’s house and it is correct, otherwise the Messenger of Allaah (SalAllahu Alayhi Wasallam) would never have ate.” [See also Anwaarus-Sati’a (p. 109)]

The reasoning from this hadeeth is not correct.

Firstly: the Word (imra’ah) is either a doubt by the author of Mishkaat or a scribes mistake because the proper word is (imra’atin) that a woman’s messenger came to give an invitation to the Messenger of Allaah (SalAllahu Alayhi Wasallam) rather than the messenger of the deceased’s wife. This narration is also found in:

All these books mention the word (imra’atin) and this is the correct wording.

Secondly, some people who have accepted the wording as (imra’ah) have given the following answer:

[2] And others have said other things, but they try to prove this point by ta‘weel trying to legislate eating from the deceased’s house.

“Eating from the deceased’s house is disliked (makrooh) and an innovation.” [Sharh Naqayah (1/40) ]

“If Mullaa ’Alee Qaaree and Halabee saw the customs and tradition about today they would have most definitely pronounced a ruling. And there is no doubt that legislating its permissibility will open the doors for the rejected Shaytaan and it will put the lazy Muslims into a lot of trouble and we pray to Allaah that he keeps us upon the straight path.” [Ahkaamush-Sharee’ah (3/197)]

When the Messenger of Allaah’s (SalAllahu Alayhi Wasallam) son Ibraaheem died, Aboo Dharr al-Ghafaaree (radiyallaahu ’anhu) on the third day gathered some dates, milk and wheat food and placed them in front of the Messenger of Allaah (SalAllahu Alayhi Wasallam) and he recited Soorah’s Faatihah and Ikhlaas and made supplication and said to Aboo Dharr al-Ghafaaree (radiyallaahu ’anhu),

“Divide this amongst the people so that the reward from this reaches my beloved Ibraaheem.”

So from this they try to prove two things [i] preparing food on the third and [ii] making supplication over the food place in front. They say this narration was mentioned by Mullaa ’Alee Qaaree in his book Awzajundee.

“Neither is this book Awzajundee a writing of Mullaa ’Alee Qaaree, nor is this narration authentic or reliable rather it is mawdoo’ (fabricated) and baatil and it cannot be relied upon. There is no trace of this narration in any of the books of hadeeth.” [Majmoo’ul-Fataawaa (2/74)]

“These are detestable, shameful, ignorant and baatil acts and it is necessary to remove them.” [Ahkaamush-Sharee’ah (1/10)]