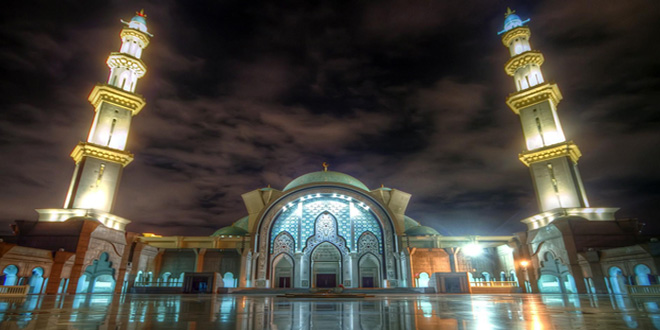 Question. Is one who calls himself a “Salafi” to be considered a partisan (hizbi)

Hence, the one who claims that he is upon the madhhab of Ahl us-Sunnah wal-Jamaa’ah [actually] follows the path of Ahl us-Sunnah wal-Jamaa’ah and abandons the Opposers. However if he [is one who] wants to unite the lizard and the fisth – as they say – meaning, to unite a creature from the land with a creature from the sea, then this is not possible. Or to unite water and fire in a vessel. In light of this, Ahl us-Sunnah wal-Jamaa’ah do not reconcile with the path (madhhab) of those who oppose them such as the Khawarij, the Mu’tazilah, the Hizbiyyeen amongst those who call themselves, the Contemporary Muslims. Such is one who wants to unite between the errors and misguidance of the contemporaries with the manhaj of the Salaf. So “the latter part of this Ummah will not be corrected except by that which corrected its earliest part.” The essence of the matter is that it is necessary to weigh matters and to separate them.

[1] Shaikh ul-Islaam Ibn Taymiyyah said: “There is no criticism for the one who proclaims the way (madhdhab) of the Salaf, who attaches himself to it and refers to it. Rather, it is obligatory to accept that from him by unanimous agreement (Ittifaaq) because the way (madhdhab) of the Salaf is nothing but the Truth (Haqq)” [Majmoo al-Fataawaa 4:149]

I say: Reflect  dear reader  upon the words of Shaikh ul-Islaam which [were uttered] before approximately eight centuries, and it is as if he is refuting one of the contemporaries of today who ascribes himself to knowledge and says, Whoever makes it obligatory upon the people that he should be an Ikhwani or a Salafi or a Tablighi or a Sururi, then his repentance should be sought. Either he repents or he is to be killed.!!!

[*] After completing this book some papers reached me which contained some of Aaid al-Qarnis recantations from some of his errors. I found that amongst them was his recantation of this grave error. It is from justice that we mention this particular one: “Fourteen: I had said in a cassette, Whoever makes it obligatory upon the people that he should be an Ikhwani or a Salafi or a Tablighi or a Sururi, then his repentance should be sought. Either he repents or he is to be killed. This is an error that emanated from me and I seek Allaahs forgiveness from it. What I meant was that whoever did that, then he has legislated (into the religion). However, it is an error regardless and I pardon myself from it. I believe that the madhhab of the Salaf is the correct madhhab and it is the one that is obligatory for the people to follow, to be guided by it and to traverse its path.”

So I say: Subhanallaah! How has he granted himself the right to place the True Salafi Manhaj amongst these other methodologies (manahij) and astray, innovative deviant sects?

And our question to this person who actually lives in the land of Tawhid  and who holds a Masters degree in Hadith  is if a person is not a Salafi then what is he?

And the Allaamah, Abdul-Aziz Ibn Baz  the [former] mufti of Saudi Arabia was asked: What do you say about the one who calls himself Salafi or Athari? Is this is a tazkiyah (purification) of his own self?

So he replied  may Allaah have mercy upon him  “When he is being truthful [in his claim] that he is Salafi or Athari then there is not harm in that, [this is] similar to what the Salaf used to say, So and so is a Salafi, So and so is Athari as a tazkiyah (commendation) which was necessary, a tazkiyah that is obligatory.” [Cassette: Haqq ul-Muslim 16/1/1413 Taif]

And Shaikh Bakr Abu Zaid said, “And when it is said, Salaf or the Salafis or Salafiyyah then this is an ascription to the Salaf us-Salih, all of the Sahabah  may Allaah be pleased with them. So whoever followed them in goodness, and not those who were led astray with desires And those who were firm upon the methodology (minhaj) of Prophethood were associated (by others) to the Salaf us-Salih. Hence it was said to them, [that they are], the Salaf, the Salafis and an ascription to them [being the word] Salafi. So upon this, the word Salaf means, the Salaf us-Salih (the Righteous Predecessors). And this word when it is applied generally means everyone who guides himself by the Sahabah  may Allaah be pleased with them  even if he was in this modern time of ours. It is like this, and this is what the sayings of the People of Knowledge are agreed upon. Therefore, this is an ascription which does not have any aspect which departs from the requirements of the Book and the Sunnah. Rather it is an ascription which does not depart, even for one moment, from the very first generation [of Muslims]. It is from them and returns to them. As for the one who opposes them with a particular name or custom, then no, even if he lived amongst them and in their time.” [Hukm ul-Intimaa p.36].

I say: This ascription occurs in the books of biographies (of narrators).

Imaam adh-Dhahabi says in the biography of Muhammad bin Muhammad al-Bahrani, “And he was devout, good, a Salafi”. [Mujam ash-Shuyukh(2/280)]

And he said in the biography of Ahmad bin Ahmad bin Nimah al-Maqdisi, “And he was upon the aqidah of the Salaf” [Mujam ash-Shuyukh (1/34)]

Therefore, ascribing oneself to the Salaf is an ascription which is necessary and required so that a differentiation can be made between the true Salafi and the one who hides behind them. Also so that the affair does not become confusing to those who want to guide themselves by them {the Salaf). So when the heretical groups and astray partisanships that lead astray have increased, then the People of Truth announce and declare their ascription to the Salaf with a view to free themselves from those who oppose them. And Allaah the Most High says to his Prophet and the Believers,

And who is better in speech than he who [says: “My Lord is Allâh (believes in His Oneness),” and then stands straight (acts upon His Order), and] invites (men) to Allâh’s (Islâmic Monotheism), and does righteous deeds, and says: “I am one of the Muslims.” [Fussilat 41:33]