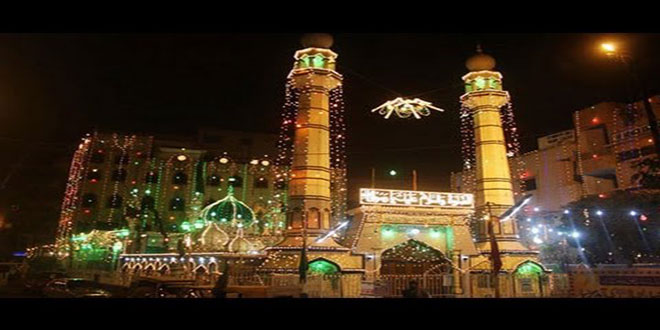 Neşet Çaǧatay goes on to mention how the Mawlid was part of intricate Turkish life and how they would label the month of Rabi al-Awwal as the Month of Mawlid. She also mentions such Mawlid recitations were rich with Turkish heritage which were part pf the dailies lived and beliefs of the Turks.

She also mentions an interesting point; that the Mawlid eulogies, from the first ones in the Turkish language were composed of verses and prose text. The style they were composed in suggested the rhyming would lead to chanting rather than recitation. This again is a reprimand on the Sufi’s, especially the Barelwis, who often thoughtlessly like to argue and say what is wrong in such recitations when the reality and fact of the matter is that such Mawlid recitations were designed to be chanted in unison which is unlegislated in the Shari’ah.

Neşet Çaǧatay then explains the history of the origins of the Turkish Mawlid and how the Ottomans played a pivotal role in the spread of the Mawlid and the associated celebrations and festivities. She explains how the Mawlid (eulogy of praise) of the Messenger of Allah (Sallalahu Alayhi Wasallam) was authored in the beginning of the 9th century Hijri / 15th century Gregorian. They began to recite the Mawlid poems in the Palaces of the Ottomans and the part the Ottoman rulers played in the spread of the Mawlid.

She also goes onto show how the Ottoman rulers ordered for Minarets and houses to be illuminated with lights and so on and so forth. [Neşet Çaǧatay, The Tradition of Mavlid Recitations in Islam Particularly in Turkey, [pp.131 Studia Islamic No. 28, 1968ce, Maisonneuve & Larose] 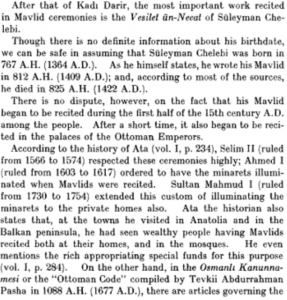 This is exactly the same in our era and in current times. You will see the houses of these people ornate with bright flashing green lights or lights that’s cover the whole house which are often green or in the shape of a sandals.

This was a brief reading and discussion on the Mawlid having Turkish Pre-Islamic origins which the Sufi and Barelwi’s have adopted as part of their Religion.  Neşet Çaǧatay in great detail, methodically and systematically goes through the history of the Mawlid and shows its Turkish roots and also shows how the celebrations and festive gatherings evolved as we see today in Europe.

The similarities are strikingly similar, in fact there is hardly any difference in these practices which have nothing to do with the Quran and Sunnah or the practise of the Salaf al-Saleh ie the pious predecessors.