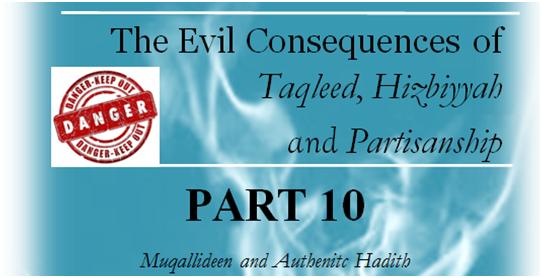 5) How can a layperson tell which hadith is weak and which is strong without blindfollowing?

This is indeed a very strange way of trying to prove the reality of taqlid and its legitimacy. It is actually a very poor standard of comprehension to stoop to such a level of scholastic presentation of such a concept. What is further bizarre is their limited and poor understanding of the deen as well as the illustrious disciplines of the Islamic sciences.

Just because a hadith is graded to be sahih or weak does not mean by acting or following the hadith you are doing taqlid of the one who graded it. Likewise a hadith being cited in Bukhari is not considered to be Sahih just because it is transmitted in Bukhari.

I mean lets get to the specifics the Ummah has ijma on Sahih al-Bukhari being authentic so if a person follows any hadith from it then he does so based on it being authentic and in this instance it is not taqlid as their ijma of the Ummah upon this. (Refer to Fawateh ar-Rahmut Sharh Musallim ath-Thabut 2/400)

Furthermore the grading of the hadith based on the conditions of the science of hadith has stringent conditions and proofs for this. The reality and main reason that this point even got mentioned was due to the poor or ill understanding of the definition of taqlid. It is very important to understand the various definitions of taqlid.

One such basic definition is Imaam Khateeb Baghdadi himself said, “in essence taqlid is to accept a statement without evidence.” (al-Faqeeh Wal-Mutaffaqih (2/66)

Abu Abdullah bin Khawar Bandad al-Basri al-Maliki who said, “Taqlid in the shariah means to refer to someone’s statement who himself does not have evidence for it and that is prohibited (Mamno’a) in the shariah and ittiba (following/obeying) is something that is established by the way of evidence.” (Jami Bayan al-Ilm Wa-Fadhlihi vol2 pg.993 no.1895), Ibn Qayyim also cites something similar in A’laam al-Muwaqieen 2/197, as does Suyuti in ar-Radd Alal Akhlad Ilal Ard pg.123)

When the scholars of hadith grade ahadith, they look at a whole host of evidences, they look the trustworthiness, the precision, accuracy, character etc and after all of this they grade a hadith. So they do base them on evidence ie they say such and such narrator is trustworthy as due to the principle of hadith, no criticism has been levelled against him.

Also on the other hand the scholar may say such and such narrator is weak due to the fact that he was a liar because such and such imam said, this is proof right and they will back this up with evidence. How on earth is this taqlid???

So all of these gradings are taken based on evidence and not a scholar saying oh I say that hadith is sahih or weak just because I say so. We have never said or advocated that the lay person is to know these sciences or that he must have a certain level of understanding to discern a difference beween sahih or weak.

The scholars are agreed in that mentioning praise and criticism and taking this is not from taqlid as this falls under the category of information. The same principle applies to a witness in front of the judge ie the Qadhi or likewise a person referring to a Qadhi for a fatwa has never been termed or understood to be taqlid.

It should also be known, a lay person asking the mufti or Ahlul ilm questions and acting upon the answer is not taqlid as the scholars of usool have understood. (for this refer to al-Mustasfa 2/389 of Ghazali, Fawateh ar-Rahmut Sharh Musallim ath-Thabut 2/400, at-Tahrir pg.547 of Ibn Humam.)

Imam Shawkani said, “A lay person referring and acting upon the fatwa of a mufti and a Qadhi or taking the testimony of a witness is not taqlid because a Hujjah ie evidence has been established for this.” (Irshad al-Fuhul pg.246)

Similarly when a Qadhi seeks the testimony of a witness, no one refers to this as taqlid and none of the scholars have ever labelled this as taqlid because here the principle is the same. So how can this be called taqlid.

At the same instance is this not ijtihad of the scholar and following his books or gradings is synonymous in asking him directly and whatever the outcome it is understood to be his ijtihad. So for this ijtihad he could either be right or wrong and this necessitates 2 reward for the former and one for the latter.

Insha Allah those, I can tell you, were the thoughts that I had. I definitely look forward to reading your response, to learning and understanding

These are just some of the thought that we had, unfortunately due to the lack of time we were unable to expand more on some of these points.

Allah willing we shall be presenting more articles and booklets on this subject. As for those who say we refute taqlid yet (blindly) follow the scholars when it comes to the issues of the rulers. Then we say their comprehension is poor, weak and based on emotion rather than looking into the issues deeply. Picking upon a few words of the Scholars is indeed injustice and way of Ahlul Bidah. We don’t follow your way because its precisely because we don’t make taqlid, how about that for comprehension to begnin with.

In addition to the loud mouth (or trigger fingers in this case) who poste one liners in their defense of taqlid on firums, are known to make alot of noise and thats all that it is, with nothing substantial and as we have previously said compiling a list of scholars who forbade taqlid shaksi is what the salafis and Ahlul Hadith have reduced these modern day champions of taqlid. What a joke.

We pray to Allah, The Almighty and Majestic that he keeps us firm on the Quran and Sunnah and keeps us away and saves us from the blind, bigoted staunch partisanship of taqlid. Ameen.

By the two who are in need of the Mercy of his Lord, May Allah forgive us. Ameen