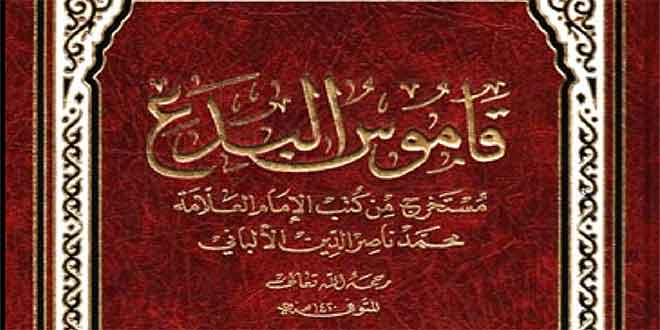 What is before you is part one of a great book of Allāmah al-Albānī ‘Qāmūs al-Bidʿah’ ie ‘An Encyclopedia concerning Biʿdah.’ The Shaikh started the book but was taken away by Allāh before he could complete it. One of the students of the Shaikh, Shaikh Mashūr Ḥasan Aāl-Salmān and Shaikh Aḥmad Ismāʿīl Shakwakānī took the responsibility on completing the book from the works and lectures of the Shaikh.

The Shaikh has used over hundreds of books, recordings and column pieces written by the Shaikh to try to do justice in order to complete the book. May Allāh bless the Shaikhs who strove to give the reader an amazing text which we hope insha’Allāh can be seen as a legacy of Shaikh al-Albānī in time to come.

The parts will be released gradually and summarised whilst taking from the most relevant and important points. Shaikh Muḥammad Nāṣir ud Dīn al-Albānī discussion on bidʿah at times are very detailed and takes the course of an Usūlī discussion and at times they very succinct and precise.

Wherever possible the translators have attempted to keep to the method and style of the Shaikh in order to give the readers a better comprehension of the thought of his Imām of Ahlus Sunnah.

Last but not least, this work alone is a testament of Imām al-Albānīs deep comprehension, interpolation and deductions which is no ordinary feat and at the same instance it silences the ardent and staunch detractors of the Imām.

May Allāh accept it from everyone involved, Amīn.

The Shaikh was fervent in his efforts to highlight bidʿah and its manifestations. To have knowledge of bidʿah and that which leads to it is from the chapter of knowledge which is obligatory to learn and understand so one can be saved from Bidʿah.

“It is an obligation for one to know about Bidʿah and it’s evils as it is through this that a person will be saved and gain closeness to his Lord. Salvation from bidʿah will only be achieved after one is aware of the principles of bidʿah otherwise a person can very easily and unknowingly fall into the evils of bidʿah. It is a well known maxim amongst jurists “that which leads to fulfilling an obligation is in itself an obligation. the same can be said about the likes of shirk, for it is obligatory to know what will lead to shirk for staying away from it is an obligation.”[1]

“The people used to enquire from the prophet about good but I used to ask about the evil, so that I could avoid it.”[2]

Therefore, in this book we shall explore the meaning of bidʿah and its various manifestations. We will also look at types of bidʿah that have crept into the Muslim creed and worship, knowledge of which is a must so that bidʿah can be avoided. May Allah help us all upon his path. Amīn.

“That for which there is no previous established example [proof]”[3]

The Shaikh mention in his books ‘Salāt at-Tarāwīh’ and ‘al-Ibdā’ that bidʿah in the religion means,

“Something introduced into the religion which has a resemblance to the Sharia in some form. One acts upon it in order to worship Allah and get a nearness to him.”[4]

THE PRINCIPLES OF IBĀDAH [WORSHIP] AND BIDʿAH [INNOVATION] IN ISLĀM.

The Shaikh in his book ‘Ḥujjatun-Nabī’ states,

“For worship to be accepted before Allāh it must fulfill two basic conditions: a] That it be purely for the sake of Allāh and b] It be in accordance with the book of Allāh and the Sunnah of his Prophet.”[5]

“Should someone perform an action or saying as part of worship, yet those actions or sayings were not performed by the prophet in order to get close to Allah as part of his worship is a something which is in opposition to the Sunnah. This is because Sunnah is of two types being Tarkīyyah and Fʿilīyyah. Therefore, to leave off performing that which the prophet left off is Sunnah. One should consider how there is no adhān call to prayer for the Eīd and Funeral prayer yet to give such a call is to praise Allah.  The prophet left doing this and therefore to also leave this off is considered a Sunnah and that which makes one close to Allah. The blessed companions of the prophet understood how important it was to stay away from and warn from bidʿah. Huḍaifah Ibn al-Yamān (RaḍiAllāhu ʿAnhu) narrates that, “All that was left off by the companions of the prophet must be left off” and Abdullāh Ibn Masʿūd (RaḍiAllāhu ʿAnhu) said that, “Follow the Sunnah and do not innovate. The Sunnah is sufficient for you so follow it.”[6]

2] The saying of the prophet “every bidʿah is misguidance” is to be left upon its general and complete meaning.

“It is narrated by Jābir Ibn ʿAbdullāh (RaḍiAllāhu ʿAnhu) that the prophet whilst giving his sermons used to say, ‘ The best speech is the book of Allah, and the best guidance is the guidance of Muhammad, and the worst of affairs is that which is innovated, and every innovation is a misguidance”[7]

“This shows all bidʿahs in the dīn without restriction are based on and lead to misguidance. Indeed the messenger said “every innovation is misguidance and every misguidance leads to the hellfire.””[8]

“The jurists have said concerning actions such as Ṣalāt ul-Ragā’ib and its pray in congregation, Reciting the Qurān in the bowing and to make remembrance aloud ahead of the funeral procession that these are all from the rejected actions and bidʿah. So the one who says that they are ‘ḥasanah’ [good] it will be said to him in reply, “Those actions which have a proof from the religion as being ‘ḥasanah’ will be ḥasanah due to them not being from bidʿah, in which case the ḥadīth ‘every innovation is misguidance’ shall remain upon its unrestricted meaning. So the one who who specifies and makes exceptions to these words of the prophet let him bring an evidence from the book and Sunnah or consensus of the scholars to establish the exception to the general words of the prophet. One cannot rely upon opinions and customs to make exceptions to the ḥadīth of the prophet.”[9]

3] It is necessary to oppose those who reject the truth, regardless of whether the opposers are many or few in number.

The Shaikh said at the end of his treatise ‘Risālah Eīdain’ that,

“Regarding the two groups there are those upon the truth and those who oppose. As for the ones upon the truth then they are the ‘jamaʿāh’ [Ahlus Sunnah community]. This is so as they are upon the Sunnah of the prophet and it is about them that the prophet described as “The Jamaʿāh”[10] and in another place he said “They [The Jamaʿʿh] are upon what I and my companions are upon.”[11] Indeed those who oppose them cannot harm them even if they are greater in number as the prophet said “There never cease to be a group [Jamaʿāh] in my Ummah who shall be manifest upon the truth. Its opposers cannot harm it up until the order of Allah shall come and they shall remain upon it”[12] Thus, the believer is not afraid by being shunned by the sheer number of those who oppose the truth. Imām Shaṭibī states in his ‘al-ʿEitiṣām that, “It has been the way of our lord that the  ones upon the truth have been fewer in number than those upon falsehood.”[13] Allah says. “And most of the people, although you strive [for it], are not believers.”[14] and “And few of My servants are grateful.”[15]So it can be said that the one who has intellect and understanding whilst reflecting upon the history of Islām and the prophets before Muḥammad will know that those upon truth have always been the strangers and fewer in number.”[16]