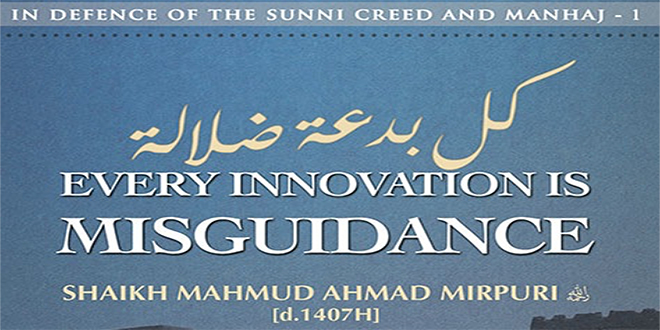 TO PURCHASE GO TO:  https://bookstore.salafiri.com/product/bidah

Contents
Introduction
Shaikh Maḥmūd Aḥmad Mirpūrī’s Biography
His Credentials
His Education
His Teachers
His Travels
Early History of the Daʿwah in England
Islamic Conferences
Ṣirāṭ al-Mustaqīm and The Straight Path
His Writings
His Etiquettes and Manners
What the Scholars said about him when he died
The Shaikh’s Family
The Shaikh’s Death
Important Principles
The Definition of Bidʿah
The Categories of Bidʿah
Whenever an Innovation is Introduced a Sunnah is Lost
The Characteristics of Innovations
The Dangers of Innovation
Answering the Confusion of Ahl al-Bidʿah
The First Doubt – New Affairs
Answer
The Second Doubt – Ijtihād or Innovations
Answer
The Third Doubt – But What is the Harm?
Answer
The First Evidence – The Ḥadīth of the Pebbles
The Second Evidence – Ḥadīth of the 2 rakʿahs as
optional prayer at the Eʿīd Muṣallah
The Third Evidence – Saying Alhamdulillāh
Wassalāmu ʿAla Rasūlullāh When Sneezing
Two Example from the Books of Fiqh
The First Example
The Second Example
The Fourth Doubt – Tabarruk
Answer
The Fifth Doubt – The Practice of the Companions
Answer
The First Evidence
The Second Evidence
The Third Evidence
The Fourth Evidence
Evidence from the Aḥadīth
The First Ḥadīth
The Second Ḥadīth
Other Doubts
The First Principle
The Second Principle
The Third Principle

What the Scholars said about him when he died

“I was very shocked after hearing the news of the tragic death of Faḍīlat ul-Shaykh Mawlāna Maḥmūd Aḥmad Mirpūrī. May Allāh accept his efforts and service with regards to propagating and spreading Islām in the foreign lands, May Allāh forgive his mistakes, raise his status and grant the whole Jamāʿah strength to cope with this tragedy. Amīn, as the whole Jamāʿah is equally grieving and may Allāh allow us to die upon Islām.”

“The news of the tragic death of Maḥmūd Aḥmad Mirpūrī reached me. May Allāh forgive the Shaikhs shortcomings and grant him mercy and may he grant you wholesome patience. May Allāh give the Shaikhs children guidance and success to tread upon his path and grant us an equal replacement, Amīn. We all belong to Allāh to him we shall return.” (ʿAbdul ʿAzīz bin ʿAbd Allāh bin Bāz – Dār al-Iftā, Riyāḍh)

“Me, my father and my household are all grieving with you. Kindly convey my condolences to the Jamāʿah, the Shaikhs family and children, as I am also a member of this Jamāʿah.  I praise the efforts of Jamāʿah Ahl al-Ḥadīth United Kingdom. I was impressed with the Shaikh’s praiseworthy and noble efforts and I ask Allāh to accept this from him and to replace him with someone beneficial for the Jamāʿah Ahl al-Ḥadīth. May Allāh also grant success in further propapagting the Dīn and its teachings and may he give you and all of us patience. Amīn.” (Shaikh ʿAbdul Qādir Ḥabībullāh al-Sindhī – Professor Islamic University Madīnah) abībullah

“The Shaikh had raised the knowledge of Islām in the land of kufr and upheld the burden of rectification in this land of anarchy. Due to his effort, struggle, understanding, contemplations, wisdom and intelligence he raised the rank of the Ahl al-Ḥadīth of Britain from being virtually unknown and non-existant to the epitomy and vast stature of society. Without doubt everyone played a role in this formation and InshaʾAllāh everyone will be rewarded accordingly for their efforts. Thus the pivotal role the Shaikh played is not in need of any clarification. We have hope in our Rabb the most generous and oft giving and we supplicate to him that he grants the Shaikh the loftiest of stations and that he is blessed, favoured, forgiven and compassion. My heart pains after contantly thinking that a very capable and an adept visionary leader passed away. Death is undoubtedly a stark reality and its time and place is also definitive and so when a tragic event like this occurs the heart is affected and old thoughts become active. I pray to Allāh that he grants the Shaikh his special blessings and that he grants his close relatives virtuous patience and that he replaces the Shaikh with someone beneficial for all of us.” (Shaikh Ṣafī al-Rahman al-Mubārakpūrī – Markaz Khidmah al-Sunnah Waʾl Sīrah al-Nabawīyyah – Islamic University Madīnah)

The Definition of Bidʿah[1]

Shaikh ul-Islām Imām Ibn Taymiyyah has further elucidated and said, it means to introduce an action, which was not practised during the time of the Messenger of Allāh (Salallahu Alayhi Wasallam), and there was no obstacle that prevented them from doing it. Furthermore, there was no legal reason for them to even formulate an innovation, so despite this if a new action is performed with the understanding that it is part of the Dīn, then this is an innovation.[4]

[1] ʿAlī Maḥfūẓ said regarding the technical or Sharīʿah meaning of bidʿah, “A new way introduced in the Dīn which resembles (aspects) of the Sharīʿah which is only practiced in order to exceed in worshipping Allāh.” [ʿAlī Maḥfūẓ, al-Ibdāʿ Fī Maḍhār al-Ibtidāʿ [p.15]

[2] [A] The linguistic definition of bidʿah is: “Something invented without having any prior example.” This is based upon its usage in the Qur’ān in the saying of Allāh, “Say: “I am not a new thing (bidʿan) amongst the Messengers” (Sūrah al-Aḥqāf:9), meaning Muḥammad is not a new thing amongst the Messengers, as he has precedents and prior examples before him (Isā, Mūsā, Ibrāhīm and so on). [Shāṭibī, al-Eiʿtisām [1:43]. Some linguists have defined bidʿah as, “Innovating something new in the Dīn after its completion or any statement or action based on whims, desires or personal opinion innovated after the Messenger of Allāh (Salallahu Alayhi Wasallam).” Some added “A statement or action without and prior precedence.” [al-Qāmūs al-Muḥiṭ [p.906], Ibn Manzūr, Lisān al-ʿArab [6:8], Ibn al-Fāris, Muʿajam al-Maqāʿis Fil Lugha [p.119] and Ibn Taymiyyah, Fatāwa [35:414].

[B] The word bidʿah in the Dīn has many meanings attached to it. One such meaning is given by al-Shāṭibī who said, “Bidʿah is an expression of a path taken in the religion, which is invented and resembles the Sharīʿah and by whose practice exaggeration in worshipping Allāh is intended” [Shāṭibī, al-Eiʿtisām [1:53]. Ibn Rajab said. “Bidʿah refers to newly invented actions which have no basis in the Sharīʿah. Actions that do have a basis in the Sharīʿah are not classed as innovations and are understood in the linguistic sense.” [Ibn Rajab, Jāmʿe Ulūm al-Ḥikam [2:127-128].

[C] The Scholars of Ahlus Sunnah have explained that innovation is of two types. That which is Ḥaqīqīyyah (or ḥaqīqī), meaning proper innovation, in every sense of the word. It has absolutely no association to, or basis in the Sharīʿah. [Shāṭibī, al-Eiʿtisām [1:367]. It is when a person seeks nearness to Allāh through something the Messenger of Allāh (Salallahu Alayhi Wasallam) never sought nearness to Allāh with at all, in its very foundation. From the examples of this type of innovation is seeking nearness to Allāh through celebrating birthdays, through dancing and music, or through acting. Some scholars have mentioned different examples like monasticism and secluding oneself from the worldly life and benefits etc. Such people impose fabrictated types of worship on themselves. [Shāṭibī, al-Eiʿtisām [1:370], Ibn Kathīr, Tafsīr al-Qurʾān al-Aʿẓīm [4:316], Saʿdī, Taysīr al-Karīm ar-Rahmān Fī Tafsīr Kalām al-Manān [1:782]. Shāṭibī mentions numerous other examples in his book. [Shāṭibī, al-Eiʿtisām [1:370-445].

[D] As for that which is Iḍāfīyyah (that which has a basis in the religion), this is when a person seeks nearness to Allāh on account of something by which nearness is in fact sought with Allāh in its foundation (asl). However, to which he adds something which takes it away from the form that it came with in the Sharīʿah and this is done in respect to six matters: (i) al-Kam (number), (ii) al-Kayf (form), (iii) al-Jins (type), (iv) al-Ṣabab (cause, reason), (v) al-Makān (place), (vi) al-Zamān (time). Hence, Bidʿah Iḍāfīyah [despite having a basis in the Sharīʿah] is rejected just as Bidʿah Ḥaqīqīyah is. This is because the six matters above are never established in the Qurʾān and Sunnah when the asal or foundation will be in the Qurʾān and Sunnah. [Ṣāleḥ bin Saʿd al-Suḥaimī, Tanbīyyah Ulil al-Abṣār Ila Kamāl al-Dīn Wa Ma Fī al-Bidʿah Min Akhṭār [p.96], ʿAdawī, Uṣūl Fī’l Bidʿah Waʾl Sunan [p.30] (also known as Ṭarīq al-Wuṣūl Ilā Ibṭāl al-Bidʿah bi ʿIlm al-Uṣūl). An example of Bidʿah Iḍāfīyah would be to offer special prayers in mid Shaʿbān despite prayer being established in the Dīn the mode and form of such a prayer is not established by the Messenger of Allāh (Salallahu Alayhi Wasallam) at the particular time, hence it is an innovation. Examples of this are making Zikr in unison after the five daily prayers etc. [Shāṭibī, al-Eiʿtisām [1:452], Ṣāleḥ bin Saʿd al-Suḥaimī, Tanbīyyah Ulil al-Abṣār Ila Kamāl al-Dīn Wa Ma Fī al-Bidʿah Min Akhṭār [p.96]. [E] In fact, the ḥadīth of Āʿishah, “Whoever introduces something into this affair of ours which does not belong to it, shall have it rejected.” leads to the irrefutable conclusion that, nothing is considered a bidʿah in the Sharīʿah sense except when these conditions are met. These three conditions are: ‘al-Ihdāth’ – Introducing something new, ‘al-Iḍhāfah’ – Ascribing it to the religion, ‘A’dm al-Dalīl ash-Sharʿī’ – Absence of Sharīʿah evidence [for this newly-introduced matter] in either a general way or a specific way from the prophet of Allāh. [See also ʿAlī Nāṣir al-Faqīhi, al-Bidʿah Ḍawābiṭha Wa Atharuhā al-Sayyʿia Fiʿl Ummah [p.12-13]. The Albanian Ḥadīth Master, Muḥammad Nāṣir al-Dīn al-Albānī was of the opinion that most innovations are based on general principles which are still impermissible and al-Shatibi classed such innovations as Iḍāfī. [al-Albāni, Ṣaḥīḥ Targīb Waʾl Tarhīb [1:54-55], al-Radd al-Taʿqīb al-Hathīth [p.48]

[3] Ibn Taymiyyah said “An innovation in the Dīn of Islām is every action not legislated by Allāh The Most High nor his Messenger (Salallahu Alayhi Wasallam) ie something not legislated which is neither mandatory nor recommended.” [Ibn Taymiyyah, Majmūʿa Fatāwa [4:107-108]