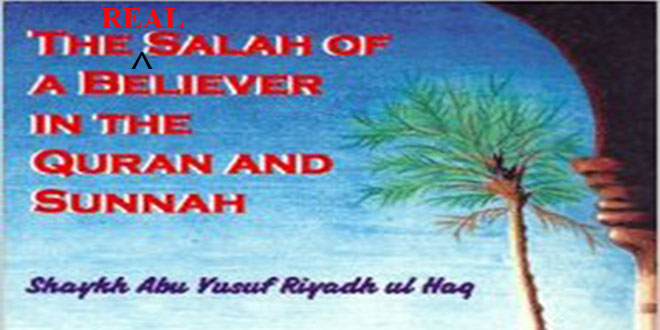 A Specific Rebuttal Of The Book ‘Salah of the Believer’ of Riyadh ul Haq – Chapter: The Position of the Hands in the Salah

Bismillah ar-Rahman ar-Rahim. May the peace and blessings of Allah be upon his Final Messenger Muhammad (Sallalahu Alayhi Wasallam)

1.The authors brings a quote from Imam Tirmidhi on page 83 of his book concerning Imam Tirmidhi’s opinion on where to place the hands in the salah.

Answer: This is not proof unless it is sustained from the Quran or Authentic ahadith: it is only the opinion of the Imam. Authentic chains of narrations must be bought to prove the Imam’s point that sine if the Sahabah placed their hands below the navel. Until proof is brought this remains an opinion which can either be right or wrong and in this case it is wrong because no authentic chain exists to this effect. The burden of proof lies with the author of Salah of a believer: he has yet to produce any authentic narration. It is noteworthy that above the navel also means on the chest as most people chests are above their navels.

The author then admits that the hadith of Wail ibn Hujr (RadhiAllahu Anhu) is not in current printed edition of Ibn Abi Shaybah. The reason it is not in any printed copy is because Ibn Abi Shaybah did not originally put it in with this fabricated additional wording: ‘below the navel’.

One of the fathers of deoband and greatly loved and adored (in most circumstances) Anwar Shah Kashmiri confirms in his book, ‘Faidh al-Bari Sharh Sahih al-Bukhari (2/26) that such a narration has no basis for its existence.

The Shaikh and Imam of the Sunnah, Badi ud din Shah ar-Rashidi as-Sindhi set a challenge in his lifetime to the Hanafis to produce one authentic narration on this topic and they could not even until the day he died. He wrote.

“as for the narration that is mentioned in Ibn Abi Shaybah, that the Prophet (Sallalahu Alayhi Wasallam) placed his hands below his navel, then this narration does not even have a basis for its existence. All praise is due to Allah, we have both the original manuscripts and the printed edition of the book but neither  of them has this narration recorded within in. So the liars have been caught out.” (The position of the hands in the Salah of the Prophet English edition page 17.)

It is note worthy that the Salafi Scholars are Ahlul Hadith and they have the original manuscripts of Ibn Abi Shaybah. So all of the claims on page 84 of the Salah of the believer are only claims of the hanafis and nothing more.

See page 15 of Shaih Badi ud dins book and page 102 of Shaikh Imam Muhammad Nasir ud din al-Albani’s book, ‘The Prophets Prayer Described’ for a full and detailed explanation of why narrations should not be taken from Abdur Rahman al-Kufi. If you are still unconvinced read it again.

As for what Shaikh Ahmad Uthmani Thanwi Hanafi mentions (as recorded on page 85 and 86 of Salah of the believer) about Abdur Rahman not being accused of lying, then no attention should be paid to that, as it is commonly known that Mawlana Ahmad Uthmani Thanwi Hanafi stretches things to fit his madhab. It is sufficient a refutation that Allamah Ibn Ajmi in his book ‘al-Kashf al-Hathith’ has mentioned Abdur Rahman under the categories of those who would fabricate hadith and no Muslims can rely on the narrations of such a man.

Even the hanafi scholar Shaikh Zaila’i in his Nasb ur-Ra’yah (1/314) and Shaikh Abdul Hay Lucknowi in his Hashiyah Hidayah (2/102) quote Imam Nawawi that this narration is weak by consensus, likewise Shaikh Ibn Humam in his Fath ul-Qadir explanation of Hidayah (1/102) mentions the same.

As for Imam Tirmidhi making Abdur Rahmans narrations Hasan, then in light of the aforementioned, this needs no further clarification as this is Imam Tirmidhis opinion ans it has been superseded by the evidence that we have against Abdur Rahman al-Kufi al-Wasiti. We follow evidence not opinion and we are not blind followers.

As for the action of Ali (RadhiAllahu Anhu) then he used to place his hands on his chest, as was the Sunnah of Muhammad (Sallalahu Alayhi Wasallam) (refer to Tarikh al-Kabir of Imam Bukhari)

Aside from the authenticity of this narrations you may act on them if you wish but we shall act on the Sunnah of the Final Messenger Muhammad (Sallalahu Alayhi Wasallam) as the actions of the aforementioned Imams were their opinions but what we shall act on came from Allah who revealed it to Muhammad (Sallalahu Alayhi Wasallam).

It is also note worthy that scholars from all four madhabs placed their hands on their chests in Salah. (Refer to The Prophets Prayer Described by Shaikh al-Albani and Positions of the hands in the Salah of the Prophet of Shaikh Badi ud din for further clarifications)

As for Ibn Qayyim then see his Kitab as-Salah (pg.87) he states that Muhammad (Sallalahu Alayhi Wasallam) would place his right hand upon his left elbow upon his chest.

It is as Imam of Hadith al-Albani stated in his book, ‘The Prophets Prayer Described on page 103,

“So there are three ahadith which show that the Sunnah is to place the hands on the chest, and one who comes across them will not doubt that together they are sufficient to prove this.”

Furthermore, Shaikh Badi ud din mentions the Hanafi scholars, especially Amir Haj who is seen to be close in rank to his teacher Ibn Humam Hanafi. We can understand the following important points from these sayings:

Our Hanafi brothers should learn a lesson from these statements and should abandon following a matter which is not proven from any authentic source but is merely speculative.

The challenge still stands. Bring one authentic hadith that Muhammad (Sallalahu Alayhi Wasallam) placed his hands below his navel in the prayer and we shall publicly give you one thousand pounds. Make sure you also present it with the chain of narration.

Oh yes and furthermore, above the navel does not mean below the navel.