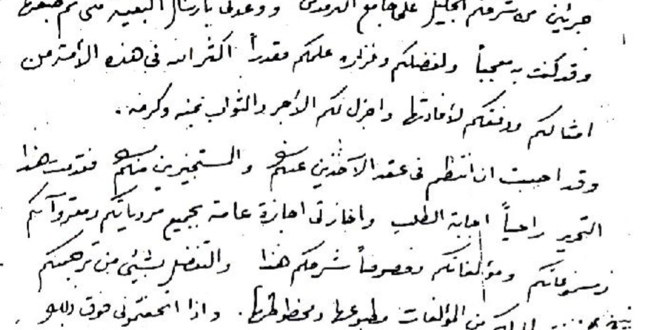 The people of innovation of misguidance have been saying for many years, “Oh Shaikh al-Albani has no Ijazah in Hadith” and so on and so forth. When this bogus and fallacious claim was refuted and rebuked by showing Imam al-Albani’s Ijazahs there was an eerie silence for many years.

However, Ahlul Bidah’s hatred for the Ahlul Hadith and Ahlus Sunnah has always existed, it relentlessly continues which is anything but a normal trait for them. They think by uttering Shaikh al-Albani the watchmaker is going to take any of his honour and eminence away, then this is nothing except that these people resemble the misguided sects which Imam Ibn Abi Hatim refers to in his treatise Asal as-Sunnah Wa E’itiqad ud Din.

Most of this hatred and animosity for the Ahlul Hadith and especially towards Shaikh al-Albani is so baseless and immature that it warrants nothing but silence. However, as intellectually capable these individuals are-sometimes a response of sort is warranted in order to help these geniuses!!!!

A few years back an extremely naive and hate mongering individual from the hanafi contingencies boldly regurgitated the following claim.

“Why did al-Albani take Ijaza from the Hanafi Muhaddith of Halab- Shaykh Muhammad Raghib al Tabbakh (who was the ustadh of Abdal Fattah Abu Ghudda in his home town of Halab also)?!”

We authored this response at the time but for some reason or another it was not published. This is a brief yet succinct answer to all those who despite knowing the truth continue in their blind vendetta against the noble Imam of Ahlus Sunnah, Shaikhana Imam Muhammad Nasir ud din al-Albani. Furthermore, it will at least make the new comers or the new kids on the block from the latter contingency to think twice when attempting to reiterate the same spurious claim.

Just as a side point The late Shaikh Ahmad Abdur Rahman al-Banna used to also repair watches and learn the science of watches and hence was given the title of as-Sa’ati (ie the horologist), it is indeed mediocre and rebound slap on the faces of these anger mongering people.

The First Response to The Despondent Retractors

Both Shaikh Abdul Tawwab Muhadith Multani [1366H] and Shaikh Muhammad Raghib Tabbakh Muhadith Halabi [1370H] were extremely fond and held the works and writings of both Shaikh ul-Islam Imam Ibn Taymiyyah and Imam Ibn Qayyim with great esteem and honour. Shaikh Abdul Tawwab would print their books and Shaikh Muhammad Raghib at-Tabbakh would praise both of them.

This is also the reason why Gibril Fouad Haddad vents his anger and hatred for Shaikh Tabbakh (Source: http://www.livingislam.org/k/albi_e.html).

The point being how do Imam al-Albanis despondent retractors use Shaikh Tabbakh with such reverence as being a Hanafi like them when they clearly and overwhelmingly hate, oppose and abuse Shaikh ul-Islam Ibn Taymiyyah and his creed. This is a manifest contradiction and another failed attempt of an attack by the neo Hanafi Asharis on Ahlus Sunnah and Shaikh al-Albani

The Second Response to The Despondent Retractors

According to some researchers and as evidence suggest Shaikh Muhammad Raghib Tabbakh himself also gained ijazahs and chains of Hadith from Shaikh Abdul Tawwab Muhadith Multani which ultimately lead back to Shaikh Muhadith Nazir Hussain Dehlavi.

Thus one can very clearly conclude and ascertain the ijazah given to Shaikh al-al-Albani by Shaikh Muhammad Raghib Tabbakh were none other than those which were within his own school of thought and were essentially his anyway.

This is another serious setback for the bold claimants and retractors of Shaikh al-Albanis ijazahs, that they had the nerve to make their audacious assertion and we quote again, “Why did al-Albani take Ijaza from the Hanafi Muhaddith of Halab- Shaykh Muhammad Raghib al Tabbakh (who was the ustadh of Abdal Fattah Abu Ghudda in his home town of Halab also)?!”!!!

We thought so, utter silence, is it nor fair to ask now, why did Shaikh Muhammad Raghib at-Tabakh take ijazah from a Salafi Ahlul Hadith Scholar? Indeed, this will be extremely difficult and painful to digest for these modern day neo-hanafi retractors. The avid reader should also know the vehement and arch enemy of Ahlus Sunnah, Gibril Fouad Haddad classed Shaikh Muhammad Raghib at-Tabakh as and we quote, “Both Tabbakh and Baytar were run-of-the-mill Wahhabis.” (Source: http://www.livingislam.org/k/albi_e.html)

Yet again another laughable instance at these neo-hanafi retractors when both contingencies are miserably failing to malign Shaikh al-Albani when they cannot themselves decides on a unified position. This again shows their unison and intrinsic relationship for the sake of attacking the Salafis, the Ahlul Hadith and Shaikh al-Albani.

The Third Response to The Despondent Retractors

If this was not enough, it would not be too much trouble to ask these retractors to sit down and stop eating in case there is some severe regurgitation and vomiting or lest they fall after reading the following and injure their little weak selves!!!

Upon receiving the book on the 18th of Dhul Hijjah 1349H, Shaikh Muhammad Raghib at-Tabakh wrote a letter to Allamah Muhammad Abdur Rahman Mubarakpuri, lauding and extoling him with the following honorary titles,

and he said about his monumental book ie Tuhfatul Ahwadhi,

“Verily I was greatly impressed and amazed with your virtue and abundant detailed knowledge, may Allah raise more people like you in this Ummah, may he grant you benefit and your share of successful reward from his power and generosity.”

And then, wait for it, just make sure your sitting down if you are one of those ardent vehement retractors of Shaikh al-Albani because this is going to extremely painful because all that time you have been mouthing and gloating reprehensively,

“Why did al-Albani take Ijaza from the Hanafi Muhaddith of Halab- Shaykh Muhammad Raghib al Tabbakh (who was the ustadh of Abdal Fattah Abu Ghudda in his home town of Halab also)?!”

(See the scan below)

Yes, you read that right, the same Shaikh Muhammad Raghib at-Tabakh, The Hanafi Muhadith (according to you), the ustadh of your Abdul Fattah Abu Ghuddah, from his home town of Halab, request an ijazah from OUR Salafi and decisive Ahlul Hadith Scholar, OUR Shaikh Allamah Muhammad Abdur Rahman Mubarakpuri. 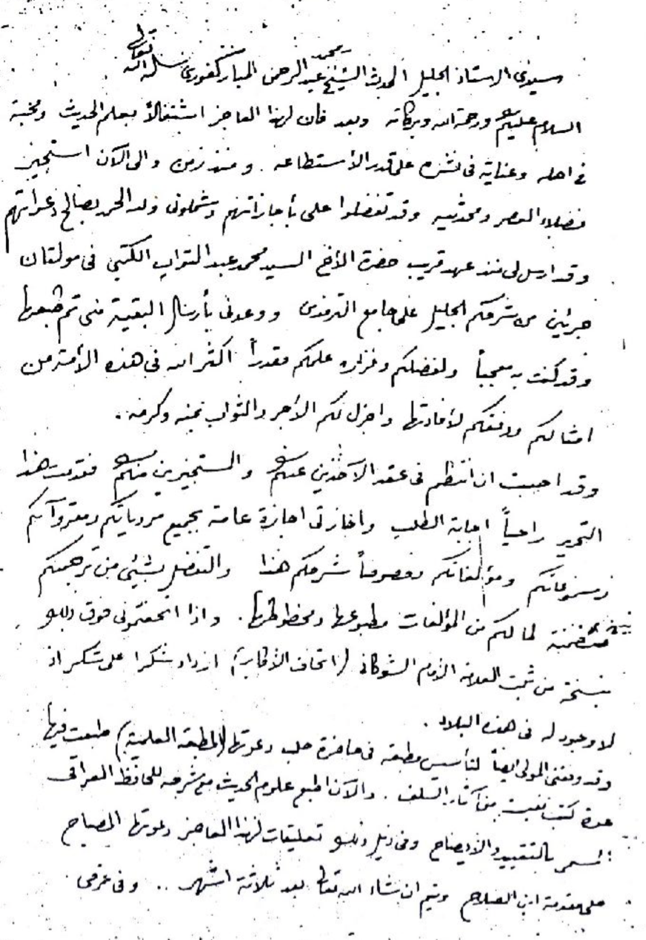 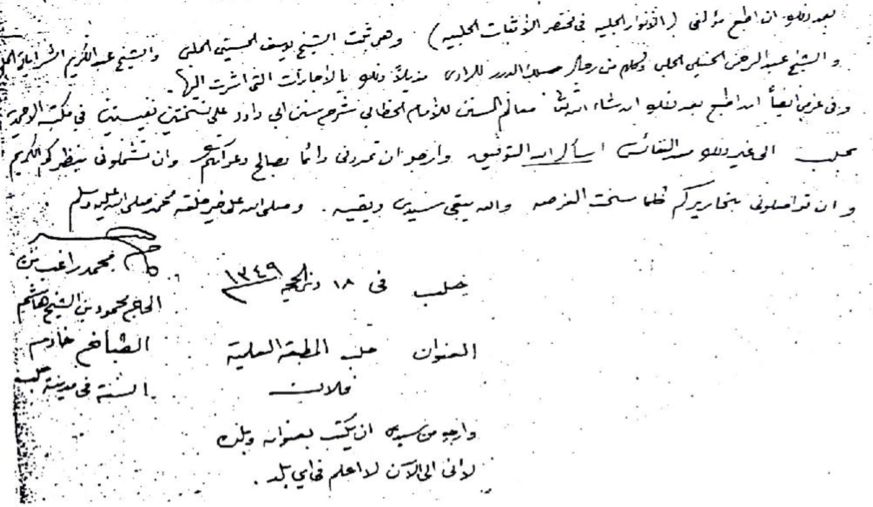 Just in case you missed that due to your animosity and blind bigoted hatred for the Salafis, Ahlul Hadith and specifically Shaikh al-Albani. Your Shaikh Muhammad Raghib at-Tabakh (as you claim) requests an Ijazah from Our Salafi Ahlul Hadith Imam, the Muhadith al-Allamah Muhammad Abdur Rahman Mubarakpuri.

I presume it would be appropriate to change the following sentence,

“Why did (Shaikh – we are not like these bigoted retractors who in their anger and hatred omit the word Shaikh) Tabakh take Ijaza from the Salafi Muhaddith of Mubarakpur- Shaykh Muhammad Abdur Rahman Mubarakpuri (who was not the ustadh of Abdal Fattah Abu Ghudda nor from his home town of Halab)?!”

If any Sufi, Hanafi Deobandi or Barelvi has even an iota of shame or self respect from the very little that remains of it now, let him retain it without making a complete and utter fool of himself by sparing the sheer humiliation and depraved degradation that will follow if he utters such an absurd and farcical claim ever again with regards to Shaikh al-Albanis Ijazah!!!!

We also hope there have been no serious accidents!!!!

Written by the two weeks slaves of Allah