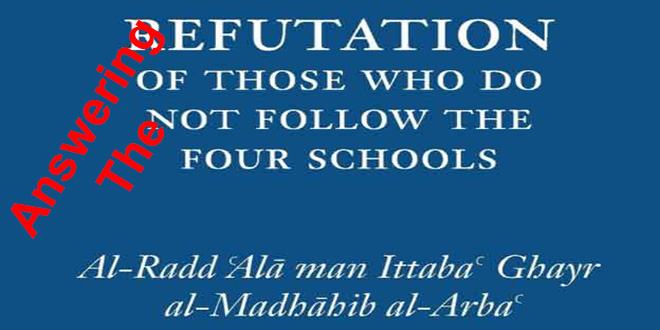 The Truth and Guidance is Not Restricted To the Four Madhabs – Whoever Says this has Lied!

The following is a series of short succinct points of clarification and answers to the book allegedly attributed to Hafiz Ibn Rajab (795H) ‘al-Radd ‘ala mann ittiba ghair madhahib al-arb’a’ – Refutation Of Those Who Follow Other Than The Four Schools.

“This assertion is not entirely accurate because there were numerous Imams during and before their times who were all inheritors of the Prophet, Mujtahid Mutlaqs and people who guided and directed the Muslims.”

“The Muslim who does Taqlid or Ittiba of one of the four imams, then without a doubt he will be from amongst the people of truth-Ahl Al-Haq, the people of guidance and Ahl al-sunnah wal jama’ah.”

“How does a muqallid know he is upon the Haq (truth) or falsehood because he will be unaware and unacquainted with the evidence in the first place. Rather Allah said, “And most of them follow not except assumption, indeed, assumption avails not against the truth at all. Indeed, Allah is knowing of what they do.” (Yunus:36),

Secondly: there is a clear difference between Taqlid and Ittiba and therefore confusing the two is confusing the discussion and contention.

Thirdly: There are many Imams and not just 4, so why is their Taqlid (ie of the 4 Imams) acceptable and considered to be the truth when the Taqlid of other than the four imams is understood to be futile and rejected?

Fourthly: as the statements of Shaikh Al-Islam and Hafiz Dhahabi have preceded which elucidate, it is not the Madhab of Ahl Al-Sunnah to restrict the truth to the four Madhabs.

So one naturally asks, which Ahl Al-Sunnah’s madhab are you referring to.”