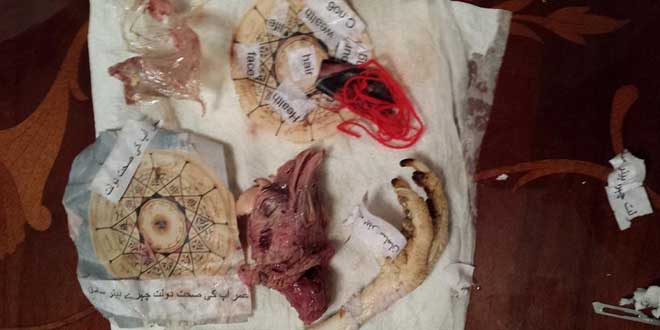 The Reality and Dangers of Black Magic

The Origin of Sorcery & Magic

To pinpoint the exact origins of magic and sorcery and when and where it started is rather difficult and it would be mere guesswork. Magic and sorcery has existed from old times and is clearly visible and widely practised all over the world in our times.

Magic and sorcery has existed in all nations from olden times, it was practised during the times of the Greeks, Egyptians, Romans, in Babylon, amongst the people of the kalahari, in the Maldives, Andaman islands and nicobar. It was and still is practised in most of the present day European countries and savagely rampant in the Indian sub-continent.

Witchcraft, sorcery and black magic were a part of normal culture in England and in the 19th century and even in current times witches still exist in remote parts of the United Kingdom. It is well known of Norfolk to be associated with witchcraft and real life witches who practised it today.

Magic and sorcery still exists and was widely practised in older civilisations and cultures from amongst them the aborigines of Australia, the red Indians of the Americas. These civilisations were known for their deep, strong rooted beliefs in spirits and witchcraft, all associated with magic and sorcery based practices.

Black magic, sorcery, witchcraft and voodoo have been long established and known amongst most African tribes and countries. For instance the Azande tribe found in north and central African believes everyone has magic in their stomachs. Magic and sorcery is too wide spread in some of the African states that it was almost considered to be pandemic which has led to the popular culture of spiritual healers similar to the sub-continent peers.

In most older civilisations magic and sorcery was part of the religion and formulated parts of the belief system of these people. The Egyptians formulated their religion and practices of worship on sorcery and magic. In older civilisations like the Egyptians, the Babylonians, the people of the Vedas believed the power and control of their gods and deities was from magic.

What Is Magic & Sorcery

Magic is loosely understood to mean to affect or influence others by seeking help from shayateen, evil spirits and stars. This can affect individuals physcologically and also their bodies as the opposite is also true in that something harming the body eventually affects the mind of that person. For example fear, which is something affects the brain but eventually ones hair stands on end and the body trembles.

Various other western sources have described magic in a similar way which indicates that is has a universal meaning that a concept, a religious practice or act that is used to describe a mode of rationality or way of thinking that looks to invisible forces to influence events, effect change in material conditions, or present the illusion of change.

Magic or commonly known as sihr in Arabic is essentially known as the chanting of certain words, tieing knots or using medicines and or other things by which a sorcerer or magician does his magic and sorcery. Similarly in the same manner in the Muslim world creating knots and blowing on them is also known as magic which the sorcerer and magician often learn from the shayateen and jinns

“Magic (sihr) is a set of ‘uqad (knots), ruqa (incantations), and words uttered or written, or carried out in such a way as to affect the body of the subject (al-mashur), his heart or mind, without even coming into contact with them.” (al-Mugnee 8/150, al-Kaafee 3/164 of Ibn Qudaamah)

Allaamah Raaghib Asfahaanee explained sihr in a number ways’ from them being to convince and or influence people which may also extend to being amazed or dazzled (refer to Soorah al-Hijr:15) and the saying of the Messenger of Allaah (Sallalahu Alayhee Wasallam) “Verily some speech has magic.” (Bukhaari).

Another type is things may appear or seem to be magic or the fixating of a thought or vision (refer to Soorah Taha:66 and Soorah al-A’raaf:116)

The third is in which magicians and sorcerers access and seek help from the shayateen by achieving closeness to them as Allaah has indicated in the following verse,

and lastly they indulge in the claims of the magicians pertaining to the stars. (Refer to Fath ul-Baaree 10/222)

In some situations sihr or magic is referred to the object the thing the magician uses in order to achieve his desired magical goal, it is also referred to the action of the magician or sorcerer. Sometimes this magic or sorcery is linguistic ie the chants or utterings the sorcerer recites and blows over knots.

The people of knowledge have differed as to the exact nature of sorcery and magic. Some have opined that a thought or concept of something is established or an opinion is formulated which has no real basis. This was the opinion of Imaam Ja’afar from amongst the Shaafi’tes, Imaam Abu Bakr Raazee from the hanafis, Imaam Ibn Hazm from the Dhahiriyyah and a group of people leaned this way. This however is the opinion of a select few and a minority view whereas the greater majority of the people of knowledge differed which will be clarified later.

“The truth is that sorcery and magic are a reality, this is definitive and known according to a great majority of Imaams and numerous scholars are in line with this. Further more the Book of Allaah and the well known authentic Sunnah of the Messenger also elucidates to this.” (Fath ul-Baaree 10/222)

“The reality of sihr is that there are some types that can kill, cause one to fall ill, or act as an obstacle against a man having sexual intercourse with his wife. Other types can separate spouses, and can make them hate or love each other. This is the saying of Imaam Shaaf’iee however some of this followers have opined differently that magic has no reality rather it is psychological thought just as Allaah said, “He said, “Rather, you throw.” And suddenly their ropes and staffs seemed to him from their magic that they were moving [like snakes].” (Soorah Taha:66). The followers of Imaam Abu Haneefah said if something like smoke or anything like it comes in contact with someones body then achieving magic is possible. So then without this or any other interaction he suffers with an illness or dies then this is not something that is correct because we have the saying of Allaah, “Say, “I seek refuge in the Lord of daybreak, From the evil of that which He created, And from the evil of darkness when it settles, And from the evil of the blowers in knots, And from the evil of an envier when he envies.” (Soorah al-Falaq 113) So if there was no reality in magic then why would Allaah ask us to seek refuge from it. Allaah also said, “teaching people magic and that which was revealed to the two angels at Babylon, Harut and Marut…. And [yet] they learn from them that by which they cause separation between a man and his wife….” (Soorah al-Baqarah:102) (al-Mugnee 8/150-151 and al-Kaafee 3/164)

Imaam Abdullaah Qutaibah cites the incidence of the woman who came to ask concerning the ruling pertaining to magic in his monumental book in defence of hadeeth, ‘Taaweel Mukhtalif al-Hadeeth.’ He goes onto say whoever does not believe in the existence and reality of magic and sorcery then he opposes that which has been revealed in the Quraan because the Messenger of Allaah (Sallalahu Alayhee Wasallam) ordered us to seek refuge in it. “And from the evil of the blowers in knots.” (Soorah al-Falaq:4)

“A group have totally rejected the existence of magic and believe it is just psychological thought.”(Fath ul-Baaree 10/222)

Allaamah Ismaa’eel at-Taymee al-Asbahaanee inserted a specific chapter pertaining to the reality of magic is his well known book ‘al-Hujjah’, the chapter title is,

“In Mentioning the Reality of Magic and Its Not Mere Psychological.”

He thereafter strongly rebukes and reprimands those who reject the reality and existence of magic for example the mu’tazilah. (Kitaab al-Hujjah 1/481)

“There are different views as to what magic is, most scholars say that magic is what causes death or illness of a person without using any visible means whilst others say that it is only a matter of thought ie (psychological thought).” (Sharh Aqeedah Tahaawiyyah pg.519).

“The majority of the scholars believe in the reality and existence of magic and whilst some of them have denied its reality and coined it with futile thoughts however this opinion is rejected because there are established reports proving the reality of magic.” (al-Mu’allim Ba-Fawaa’id Muslim 3/293-294 of Maazaree, Nail al-Awtaar 4/762 and Fath ul-Baaree 10/222)

“The reality is some forms of magic affect the heart, for example, hatred, love, facing something good or overcoming badness. Sometimes the sorcery affects the body for example feeling bodily pain or having an illness. The concept that is denied with regards to magic is the ability to interchange objects into animals and vice versa.” (Summarised from Fath ul-Baaree 10/222-223)

“Without doubt magic and sorcery is a reality and it really does affect people. As for the changing of condition of an individual ie a stable person becomes unstable or vice versa then these are imaginary things and they have no basis. The issue of things changing or a stable person becoming unstable or vice versa with regards to the affect of magic upon them then the magic is totally ineffective and has no power. At the same instance a sorcerer may inflict his magic on an individual in such a way that he may see a stationary thing moving and vice versa. The affect of this type of magic is very common and this is it’s reality, hence magic in this way affects the persons body, mind and state and it sometimes even kills him.” (Fiqh ul-Ibaadaat pg.69)

“Whosoever rejects the existence of jinns, shayateen and magic, or rejects the possession of people by jinns, or the reciting and reading of incantations or chants In order to call and communicate with jinns, then he has denied something that he has no knowledge of.” (Majmoo al-Fataawa (24/280).

“And from the evil of the blowers in knots.” (Soorah al-Falaq:4)

Imaam Bukhaari in explanation of the above verse said

“an-Naffasaati (Blowers) refers to female magicians and sorcerers. This is the explanation of Hasan al-Basree and Imaam Tabaree has transmitted this with an authentic chain. Abu Ubaidah has also mentioned this in his book ‘Majaaz’ and said, “an-Naffasaati (Blowers) refers to the female sorcerers who blow. Imaam Tabaree has transmitted from a group of the companions and others that there is also blowing in Ruqyah.” (Fath ul-Baaree 10/225)

“The female magicians and sorcerers who make knots with their magic and then blow on them.” (Fath ul-Majeed pg.237)

“From the evil of the female sorcerers who blow on their knots of magic to seek help. The knots which they make for magic.” (Tayseer al-Kareem ar-Rahmaan pg.867)

As for the say of Allaah The Almighty, “…Who believe in superstition and false objects of worship” (Yu’minoona bil-jibti Wat-Taaghooti) (Soorah an-Nisaa:51)

“Umar (RadhiAllaahu Anhu) said Jibt means magic and Taghoot means and refers to Shaytaan.” Imaam Ibn Abee Haatim has also transmitted this report .(Bukhaari has referenced it in note form in his Saheeh 8/251, Haafidh Ibn Hajr said its chain is strong in Fath ul-Baaree 8/252, Imaam Tabaree also cited it no.9766 and said its narrators are trustworthy, as also cited in Sharh Aqeedah Tahaawiyyah pg.568 and Fath ul-Majeed pg.222)