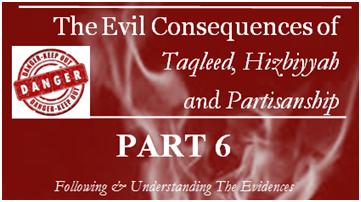 3) Then obviously, the scholars provide the evidence, but if the layperson doesnt have the ability to understand and know, then its fruitless, wont they just take whatevers given to them, on the fact that they dont know? For example, like a doctor who gives a prescription, they can give evidence for the prescription, the patient will take it because they dont know what he is on about. Couldnt this lead to not only confusion, but a fragile deen in the layperson

We ask here, when we are told that when Eesa (Alayhis Salam) will return he will follow and be upon the  hanafi madhab as mentioned by Shaikh A’la ud deen al-Haskafi Hanafi and Shaikh Abdul Latif Thathwi (Refer to Durr al-Mukhtar 1/56 and Dhab Dhababat ad-Dirasat 1/267-268)

Is this some thing we don’t understand no matter what level an individual may be at? Of course we do so this is indeed a method of distracting the people from following the Sunnah. How is it conceivable to think a Prophet of Allah will follow a man made madhab.

Similarly are we advocating that we just take this positons just like that and without questioning it. Also please remember this is just an example of one such issue and no doubt when a scholar gives a verdict it is his personal verdict but the questions is how does this then become a ruling for the madhab.

The scholars have comprehensively refuted these points and positions of the hanafi madhab. From the likes of Imam Suyuti who authored a specific treatise on this topic titled, ‘al-A’lam Bi-Hukm Eesa Alayhis Salam’ (Refer to his al-Fatawa al-Hawi 2/155)

Shaikh Lucknowi has also refuted this notion and appauling position of the hanafi madhab and said this statement is rejected and both Imam Mahdi and Eesa (Alayhis Salam) will be mujtahids and will not need to do taqlid of anyone.(Gayth al-Ghamam pg.5)

So the lay person knows and has the capability, knowledge and understanding in how to determine which scholar to ask questions and fatawa from – so he has all of this knowledge and comprehension but when some evidence is given to him he will not understand it.

So lets assume there are a few people who are really lay people and have no knowldges of the sciences, then is the obligation upon them to understand the evidences or to only know that Allaah and his Messenger said!!!

The scholars have specified when your hear the fatwa of a mujtahid and it is correct and then acting upon it is permissible, hence Shaikh Bahr al-Uloom writes in his explanation of ‘Sharh Mussalim ath-Thabut’,

“If you come across a correct statement of a mujtahid, it is permissible to act upon it, do you not know that the later (Mutakhireen) scholars issued verdicts on the statement (opinion/ijtihad) of Ibn Abi Layla in the instance of taking an oath from a witness.” (Fawateh ar-Rahmut Sharh Musallim ath-Thabut 2/407)

Lets overlook the lay person for a minute, the same applies to the mujtahid or the scholar, the shackles of taqlid and blind bigotry have engrossed the people and those within a madhab, with a deep fear that they dont even think they have the capability of ijtihad or comprehension.

Shaikh Shah Waliullah strongly rebukes such thought processes and says, “A scholar who is in agreement with and conforms to the ijtihad of his Imam in most of the issues and at the same instance he is also aware of most of the proofs and evidences alongside with having comprehension of the issues yet still think he is not a mujtahid, this is indeed a futile thought.” (Iqd ul-Jeed pg.9)

Dear readers this shows the mindset of the scholars and mujtahids from the time of Shah Waliullah Dehlawi. These scholars knew the evidences and understood them well but yet they still chose to do taqlid shaksi and taqlid jamid, ie bigoted and staunch taqlid.

So when this was the thought and mindset it shows what kind of passion they must have had to prove and establish their own madhab to be correct in the realm of this partisanship, how trustworthy can this be?

So when this was the situation with the scholars who were following the madhab, what hope would there be with the general masses. The scholars were not always seeking the evidences.

The evidences they had were treated in such a way that they were figuratively explained. So based on this do we expect the masses to just accept the opinions of the scholars of a madhab or the position of the madhab itself???

This is also only possible if the madhabs allowed them to ask other scholars. Shah Waliullah Dehlawi said, “These people (ie muqallids) say it is impermissible to ask a mufti of a different madhab and nor do they allow them to pray behind them. This is against the Ijma of the Salaf.” (Hujjatullah al-Balighah 1/124)

Imam Ibn Salah (the author of Muqaddimah Uloom al-Hadith) says in summary “When a lay person seeks a fatwa or asks concerning an issue from a scholar, he should emphasis on the answer and say was this the ruling of the Nabi (Sallalahu Alayhi Wasallam). If the mufti says yes, he can act on the fatwa and nothing more is required from in terms of him being a lay person.

However if the mufti says this is my opinion, or the opinion of Malik, Qasim, Abu Haneefah, Abu Yusuf, Shafi, Ahmad or Dawood Zahiri, or if he says it is the statement of a companion or tabi, or if he just remains silent, then it is haram to take the fatwa.

Unless it specifies it is from the Nabi Sallalahu Alayhi Wasallam), thereafter it becomes obligatory to take this and it is also obligatory for him to say to you to go and ask other scholars.”(Kitab al-Fatwa pg.280 of Ibn Salah)

Ibn Taymiyyah also explains when an issue arises for a muslim, he should seek a fatwa from a person who the people acknowledge will issue a fatwa based on the shariah ie the book and Sunnah. (refer to Majmo al-Fatawa 20/209)

Those who also authenticated the narration above include Abu Naeem Asbahani, as does Imam Ibn Qayyim in A’laam. As do the researchers of Kitab az-Zuhd of Abu Dawud, who declared the chain to be Hasan.

Note that there is also a marfu hadith in this chapter narrated by Tabrani where Prophet (Sallalahu Alayhi Wasallam) said regarding the mistake of a Scholar, “Do not Make taqlid of him in your deen even if he is on hidayah (guidance” (Imam Tabarani’s Mu’ajam al-Awsth 9/326-327 no’s 8709 and 8710 and Sharh Usool al-Etiqaad Ahlus Sunnah of Lalika’i no.182)

So even if scholar is on guidance (don’t make taqleed of him in deen) Meaning Follow because it is said by Allah or Prophet (Sallalahu Alayhi Wasallam).

How is it difficult to understand the following, Shaikh Ayni Hanafi mentions that according to Imam Abu Hanifah reciting the Quran whilst looking at it nullifies the prayer as this excessive action and the affects the khushu of the prayer.

On the other hand Shaikh Muhammad shaybani and Qadhi Abu Yusuf looking into the Quran is worship ie ibadah, therefore the prayer is valid. However the prayer will be makruh because this resembles the people of the book because they do the same. (Jam’e as-Saghir pg.15 and Umdatul Qari 2/757)

So do we really need to understand the texts and even if both sides were to present their arguments, what does a normal muslim do?

Much more can we written in answer to this question, we pray inshaAllah that we shall be able to expand on this at a later time.

By the two who are in need of the Mercy of his Lord, May Allah forgive us. Ameen