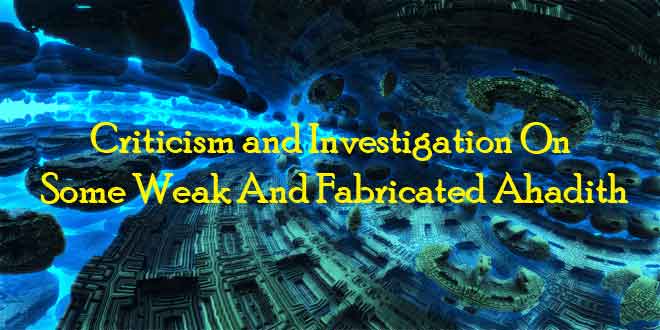 Some people for their false thoughts and ideas distort the words and meanings of the Qur’aan and Hadeeth and alongside this they present weak and fabricated narrations. Hence in this brief treatise we wish to present some investigation and notes on the narrations upon which the general Muslim ummah has erred in or are in doubt of. And all guidance is from Allaah.

“Differences in my Ummah are a mercy.”

According to my knowledge no book of hadeeth contains a chain for this.

“If it was not for him, I would not have created the creation.” (ref. Mawdoo’aat Saghaanee)

According to my knowledge this also does not have a chain. Imaam Saghanee declared it to be a fabrication. The narration could not be found in Imaam Daylaamee’s book Kitaab al-Firdaus (In wording or in meaning). The narration of Ibn Asaakir was declared as a fabrication by both Imaam Ibn al-Jawzee and Imaam Suyootee and the words of which contradict this.

The hadeeth of the mount of Jabal (ref. al-Asaabah and others).

The central narrator of this chain is Muhammad ibn E’jlaan, who is a mudallis (Tabaqaat al-Mudalliseen of Ibn Hajr and others) and he is narrating from so and so. All other supports for this narration are also weak for a detailed discussion see ‘A Scholarly Discussion On Grave Worship’ (p.55)

This narration is weak due to a disconnection in its chain. (See the checking of Musnad Ahmad by Shaikh Ahmad Muhammad Shaakir (2/171 no.896) and the meeting of Shareeh ibn Ubaid with Alee is not established.

Two narrators in this chain are Mudallis and they narrate with An Ana (so and so narrated). They are

2). Abu Ishaaq (as-Sabee’ee) (See the books on the mudallis narrators)

“Oh Jaabir the first thing Allaah created was the noor of your Prophet.”

Neither is this narration in Musannaf Abdur-Razzaaq nor in Tafseer Abdur Razzaaq. even after extensive search no chain for it could be found. (see the book of Dr.Abu Jaabir ‘The Belief Of The Noor From The Noor Of Allaah’ (p.40 and onwards).

A narration with similar meaning is narrated from Abu Ja’afar (Muhammad bin Alee bin Hussain) in the book of the raafidhee, Usool al-Kaafee (1/422 no. 10). But this chain is weak according to both Ahlus-Sunnah and Ahlur-Rafdh.

The hearing of the Adhaan from the grave of the Messenger of Allaah by Sa’eed ibn Musaayib (ref.Daarimee (1/44 no.94).

One narrator of this chain Sa’eed ibn Abdul Azeez is trustworthy but he became forgetful in later life (see Taqreeb at-Tahdheeb and general books of Rijaal, books on forgetful narrators, at-Talkhees al-Habeer (3/180)

Also there is no evidence to establish Marwaan ibn Muhammad narrated from him (Sa’eed ibn Abdul Azeez) before he started to forget.

Secondly Sa’eed has not clearly mentioned the chain by which he heard this incident from.

Abul-Jawzaa has narrated in incident in which the mother of the believers (Ai’shah) ordered for a skylight to be constructed in the roof above the grave of the Messenger of Allaah. When this was completed it started to rain. (ref.Sunan ad-Daarimee (1/43-44 no.93)

Some scholars have said Amr ibn Maalik is trustworthy, however Imaam Bukhaari has decalred him to be weak (Tahdheeb at-Tahdheeb (1/336). there is also a difference of opinion whether Abul Jawzaa Aws ibn Abdullah met the mother of the believers Ai’shah. He has not mentioned the chain for this incident so that it can be authenticated. So using this doubtful and disconnected narration to establish grave worship is greatly censurable.

The summary of this narration is that Aadam supplicated using the intercession of Muhammad (ref. al-Mustadrak al-Haakim 2/618).

His student Abdullah ibn Aslam is unknown (Majhool) and he has been accused.

In al-Mu’ajam as-Sagheer his second narration is mentioned with unknown narrators and this is sufficient for it to be fabricated.” (Majma’a az-Zawaa’id  (8/253)

May Allaah keep us firm upon the Book and the Sunnah and may our end be upon love and hate for the sake of Allaah. Ameen.