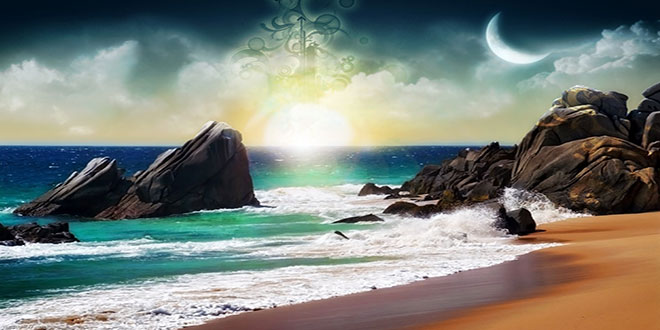 Answering Gibril Fouad Haddad, His book ‘Al-Albani and his Friends’ And The Barelvi Sufis – Part 2 – The Issue of Hazir Nazir (Omnipresent) and Ilm ul-Ghayb (knowledge of the unseen) According to Abdul-Hayy Lucknowi Hanafi

Abul-Hasanaat Abdul-Hayy Lucknowee is well respected with the Hanafiyyah and there is no doubt concerning this. The rabid soofee Gibril Fouad Haddad has even accepted the eminence of Abdul-Hayy Lucknowee and titles him with the title of ‘Imaam’. So now we will see what his Imaam has to say concerning his beliefs. So by the time we have finished with Haddad and his pack the hanafiyyah will have no choice but to abandon this and other illegimate children of theirs. “Imaam”

QUESTION
It is the habit of the people of this city that during a calamity they call upon the prophets and awliyaa for help and they believe they are haadhir naadhir (omnipresent and watching), and that when they call upon them, they listen and supplicate for their needs, so is this permissible or not?

ANSWER
This is unlawful rather it is clear and manifest shirk because in this someone other than Allaah is considered to have knowledge of the unseen and such a belief is clear Shirk. According to the Sharee’ah of Islaam shirk is to give and consider someone other than Allaah to have Allaah’s attributes and qualities and having knowledge of the unseen is one such attribute, as the books of Aqeedah have clearly mentioned. As a summary we will just mention one quote,

Mulla Alee Qaaree wites in the Explanation of Fiqh ul-Akbar, “Knowledge of the unseen is such affair which is for Allaah alone and humans are informed by means of insights miracles or signs in order to bring evidence, from those things in which this is possible and doing this in way that is not possible for them.

This is the reason why the books of verdicts mention that if someone by looking at the clouds, claims to have knowledge of the unseen and says today it will rain, then this is disbelief and the hanafiyyah have declared the people to be disbelievers who believe the Messenger of Allaah (Sallalaahu Alayhee Was-Sallam) had knowledge of the unseen because it contradicts the saying of Allaah, “Say no one knows the unseen of the heavens and the earths, except Allaah” this is how it is mentioned in Masaa’irah (a hanafee book of aqeedah).”

So believing that the prophets and the awliyaa are haadhir naadhir and to believe they hear our calls of need all the time in every situation, even if they are far away, is clear Shirk because this attribute is specific and solely for Allaah and no one is equal to him in this.

Fataawa Bazaaziyyah mentions, “Someone married (ie did a nikah) without witnesses and said, “I make Allaah, his Messenger and his Angels my witnesses” then he becomes a disbeliever (Kaafir) because he held the belief that the Messenger of Allaah (Sallalahu Alayhee Was-Sallam) and the Angels know the unseen.” Bazzaaziyyah also mentions. “Similarly our scholars (ie the hanafee scholars) said about those people who believe the souls of the Maashaykh (ie Soofee shaikhs) are haadhir, then they are disbelievers (Kaafirs).” And Allaah knows best, Abul Hasanaat Muhammad Abdul-Hayy.

QUESTION
What is the ruling concerning the person who believes the souls of the Maashykh are haadhir (present) and know everything?

ANSWER
He is a kaafir, (disbeliever). Bazzaaziyyah mentions. “Whoever said the souls of the Maashaykh (ie Soofee shaikhs) are haadhir and they know (the unseen), then they are disbelievers (Kaafirs).” and Allaah knows best. (refer Abul-Hasanaat Abdul-Hayy Lucknowee’s al-Majmoo’a al-Fataawa 1/85)