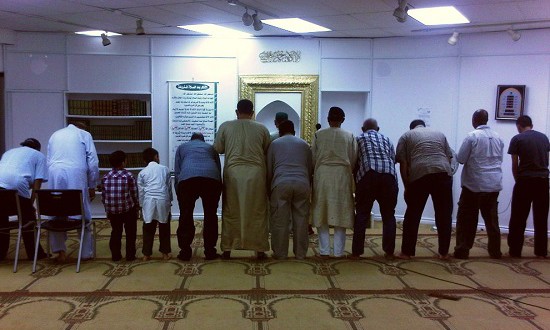 Everyone Should Say Amin Loudly

In recent times a fatwa of his eminence, Allamah Imam Abdul Aziz Ibn Baz was rendered into English, highlighting the permissibility of saying Amin quietly in order to preserve muslim unity and to bring the people closer to the Sunnah etc etc. We do not want debate the fatwa of the great Allamah, however there must be more scope and discussion of the fatwa. For example the Shaikh refers to the caller ie the Da’ee and it is possible the Allamah may have been referring to such instances when a Da’ee is in such gathering etc.

The fatwa was rendered into English and but we find in the west that we have a number of Masaajid that clearly and comfortably allow us to say Amin loudly and raise our hands, therefore are we to abandon these practices in the smaller masajids. Allah knows best the motives of the translator, however translating such Fatawa without contemplating the greater benefit for the readers is something that should always be borne in mind especially by the newcomers. How are we supposed to teach the smaller masajid the Sunnah. Yes if there is greater harm and fitan then it is probably better to pray in a masjid that allows you to practice and propagate the Sunnah.

It is not the case that by applying such principles we will abandon the Sunnah and those we want to bring closer are adamant in their denial and rejection. Dear reader please note this is not a critique of the fatwa or questioning the legitimacy of it, in fact far from it and the contrary, that such a fatwa must come with some stipulations and no doubt this fatwa should be understood in conjunction with other Fatawa of Allamah Ibn Baz. It would have been better for the translator to have been fair to Allamah Abdul Aziz ibn Baz and have also translated other Fatawa so that the readers become versant and well acquainted with the love and firmness Allamah Ibn Baz had with the Sunnah. Much can be said, we leave you with a fatwa of The great Hadith master from the sub continent…..

Is it authentically established from the non abrogated marfu hadith (ie from the Messenger of Allaah (Sallalahu Alayhee Wasallam) for the Imam, the congregation and the one who prays on his own to say Amin loudly in the loudly recited payers.

Saying Amin loudly has been established from the Messenger of Allaah (Sallalahu Alayhee Wasallam) as transmitted by Abu Hurairah (RadhiAllaahu Anhu) who said, “When the Messenger of Allaah (Sallalahu Alayhee Wasallam) would finish his recitation of the Quran he would raise his voice and say Amin.” Transmitted by ad-Daraqutni who graded it Hasan and Hakim who graded it Sahih as cited in Bulugh al-Maram.

So both ahadith prove the validity for the Imam to say Amin loudly, however this ruling pertains to the person praying on his own and the Imam is always a single person (ie he is responsible for the congregation) which is established from the authentic marfu Hadith. Therefore when it is established and proven for the Imam (to say Amin loudly) then the same rule applies to the individual praying on his own.

As it relates to the members of the congregation ie those praying behind the imam, then we say it is also established from the marfu Hadith for them to say Amin loudly. This is narrated by Ibn Abbas (RadhiAllaahu Anhuma) that the Messenger of Allah Messenger of Allaah (Sallalahu Alayhee Wasallam) said, “The Jews do not envy you for anything more than they envy you for the Salam and (saying) amin, so say amin abundantly.” Transmitted by Ibn Majah.

It is thus evident that unless Amin is not said loudly and the sound does not reach the ears of the Jews they will not be jealous or envious.

And Imam Bukhari has transmitted in the “Chapter: The Congregation To Say Amin Loudly”  (in his Sahih) from Abu Hurairah (RadhiAllaahu Anhu) The Prophet (Sallalahu Alayhee Wasallam) said that when the Imam says “Waladdaalleen” then you say Amin, for if your Amin coincides with the Amin of the angels, his previous sins will be forgiven.” Transmitted by Bukhari.

And Imam Tirmidhi said after citing the Hadith of Wa’il Ibn Hujr (RadhiAllaahu Anhu), “Abu Esa said the Hadith if Wa’il Ibn Hujr is a Hasan Hadith and a number of people of knowledge from amongst the companions of the Prophet (Sallalahu Alayhee Wasallam), the successors and those after them have said the same that a person should raise his voice and say Amin (ie loudly) and not quietly, this is also the saying of ash-Shafi, Ahmad and Ishaq.”