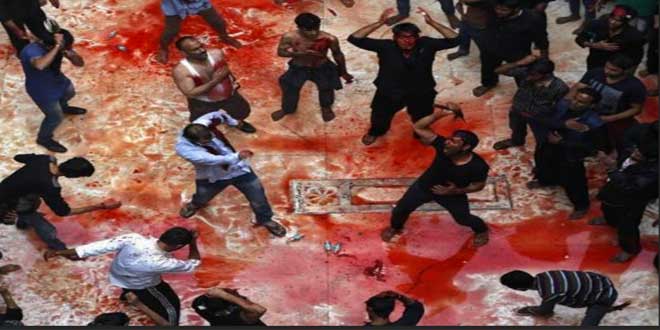 After cursing and hurling abuse at Yazīd, the Shīʿa Rāfiḍah then begin to abuse the governor of Kūfah, Ubaidullāh bin Ziyād who died in the year 64H. They allege that when he came to Kūfah at the behest of Yazīd he was ordered to capture Ḥussain RaḍiAllāhu ʿAnhu and to kill him.

A few days ago it was relayed to us by the admin of www.Salafiri.com Facebook account that an undercover Ḥanafī and neo-Jahmī whilst posing as an Ahle Ḥadīth was vehemently arguing in declaring Yazīd a fāsiq and a drunkard and thus someone to be shunned etc etc.

This undercover person is known to troll and give the false idea that he is an Ahle Ḥadīth when in actual fact from this language as well as other reasons that he is as an ardent Ḥanafī. The readers may know him as Aquilani Ahmed.

After seeing the screen shots of his conversation with the admin he ignorantly claims after retracting his initial position that although Yazīd may have been free of the murder of Ḥussain RaḍiAllāhu ʿAnhu he is still responsible and accountable for not bringing the culprits to justice.

What this mischief maker and ignorant person Aquilani Ahmed (an alias for Aqeel Ahmed) failed to realise is that he did take account of the culprits who were none other than the Rāfiḍah Shīʿa.

Secondly we find from the books of Ahlus Sunnah and the Shīʿa that Ubaidullāh bin Ziyād was clearly instructed on the contrary ie to only secure Ḥussain RaḍiAllāhu ʿAnhu.

Furthermore, the instructions and guidance which Yazīd sent to Ubaidullāh bin Ziyād was clear and specific and both the books of Ahlus Sunnah and the Shīʿa mention this, which was,

“I (meaning Yazīd) have been informed that Ḥussain RaḍiAllāhu ʿAnhu has left for ʿIrāq therefore place watchers at the frontiers. Keep a watch over the people you suspect (ie those who sent letters to Ḥussain RaḍiAllāhu ʿAnhu inviting him to Kūfah) and arrest those who have been blamed and have allegations levied against them. However, do not fight anyone that does not fight you and continue updating me with whatever happens. Wasalam.” [al-Umam Wal Malūk [4/286],  Al-Bidāyah Wan Nihayah [8/165], Akhbār at-Tawāl [pg.242] and Maqtil Ḥussain [1/214] of Akhtab Khawārazimī  Shīʿa]