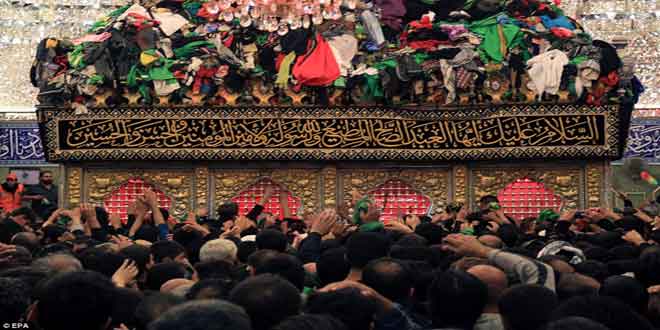 The Shia rafidah fatimid rulers were instrumental in formulating and pushing the Mawlid and the Milād amongst the people and they are the ones who made it famous.

“The Fatimid Khaliph would organise their third gathering on the 12th of Rabī al-Awwal and celebrate the Mawlid. Their habit pertaining to the gathering was to cook various sweet dishes at Dār Al-Fitrah with a lot of sugar which they would distribute in 300 silver dishes. During the Mawlid night the sweet dishes would be distributed between the numerous dignitaries like the judges, religious callers, the various reciters and admonishers as well as the presidents of the various universities and the sūfī patrons of the tombs and shrines..” [Subh al-‘Asha Fī Sana’a al-Insha [3:576]

“The Fatimids khaliphs were the first ones to innovate the Mawlid in Cairo and first from amongst them was Mu’az Al-DīnAllāh. He travelled from Maghrib to Egypt in shawwal in the year 361H. He then travelled to Alexandria in Sha’bān 362H and then entered Cairo in the same year on the 7th of Ramadhan. These people innovated 6 Mawālīd, the Mawlid of the prophet Sallalahu Alayhi Wasallam, the Milād of Alī, the Milād of Fatimah, the Milād of Hasan, the Milād of Hussain and the Milād of the current ruler. These mawlids continued with the custom and practices until Afzal bin Amir Al-Juyūsh came and abolished them. His father Amir Al-Juyush went to egypt fromSham upon the invitation of the Khaliph Mustansarbillah wherein he entered Egypt on the eve of the 2nd of Jumada al-Ula in the year 465H. When he went on the war expedition to Sham he placed his son Afzal his representative. When Amir Al-Juyush died in Rabī Al-Thani or Jumada Al-Ula in the year 487H his son Afzal took control of the army. When Muntasarbillah died on the 17th of Dhul Hijjah 495H, his reign of Khilafah was 7 years and 2 months. Afzal then put forward muntasarbillahs son as the new Khaliph whose name was mustalabillah. Then mustalabillah died on the 17th of Safar 496H and Afzal then made his son, Al-Amr bi Ahkamallah the Khaliph. Then on the eve of Eid Al-Fitr in the year 515H Afzal was murdered and the same happened to Al-Amr bi Ahkamallah in the year 524H. The 6 Milād were restarted during his reign whereas Afzal had abolished them and the people had eventually forgotten them.” [Ahsan Al-Kalām Fimā Yata‘laq Bil-Sunnah Wa’l Bid‘ah Minal Ahkām [pp.59-61]

As we have already mentioned the Mawlid was innovated by the Fatimid Shī‘as. The reign of the Fatimids started in approximately 362H until 567H. They are the ones who first innovated the Mawlid and they also innovated mawlids for Ahlul Bayt, again this is another clear cut evidence that the concept of Mawlid was not practised or even heard of during the first three generations. What is also apparent is that the current days Muslims the Sūfīs and Barailwis have rejected the other 5 Mawlids and just adopted one.

The people of deviation may say how could Muzaffar al-Dīn Al-Kaukabūrī innovated the Mawlid when the Fatimid Shias did. Well we say that when the ruler Al-Afzal bin Amīr Al-Juyūsh prohibited and banned the Mawlid and its associated practices innovated by the Fatimids, Muzaffar al-Din restarted it and gave it a new shape and direction.

“The first person to do this (ie the Mawlid or Milād) in Mosul was Shaikh Umar bin Muhammad al-Mulla who was a well known Sūfī and then the ruler or Irbil followed him.” [al-Bā’ith Ala Inkār Al-Bid‘ah wa’l Hawādith [pp.24]

“I say Malik Muzaffar Al-Dīn the ruler of Irbil, he is the one who Suyūti spoke about when he said he was the first one to innovated the Mawlid. His name was Abu Sa‘īd Kaukabūrī bin Abul Hasan Alī bin Baktakīn bin Mu‘ammar, his title was Mulk Al-A’zam Muzaffar Al-Dīn of Irbil. After his fathers death on the 10th of Dhul Qa’dah 563H he became the king at the age of 14. He is the one who innovated the Milād in the city of Irbil. [Ahsan Al-Kalām Fimā Yata‘laq Bil-Sunnah Wa’l Bid‘ah Minal Ahkām [pp.66]

“And from everything that is new from the affair of innovations with the associated belief that they are from the superior aspects of worship and the manifestation they are the well known signs of Islam, one such issue is the Mawlid in the month of Rabī Al-Awwal which includes innovations and unlawful things.” [al-Mudkhal [2:229]

“These people only want to gather at the corrupt Mawlid when there is music is sama, if it is without music and just the Mawlid and they invite the brothers for food, likewise it is free from any corrupt practices, of which some have been mentioned before and of the sole intention is for Milād then this is an innovation and a new act in the Dīn which was not a practise of the Salaf of the past because traversing the path of the Salaf is superior and better.” [al-Mudkhal [2:234]

Shaikh Taj Al-Dīn Umar bin Ali Al-Fākihānī was asked concerning the Mawlid who which he replied,

“I do not know the basis or the origins of this Mawlid in the Kitab or Sunnah, neither is it mentioned that a single scholar from the Ummah acted upon it and they were from amongst those who were exemplary in the Dīn and held firmly onto the reports of the earlier scholars, rather this Mawlid is an innovation which was introduced by the people of falsehood, of desires, whims and to seek personal gains. “ [al-Hawi Lil Fatāwa [1:190-191]