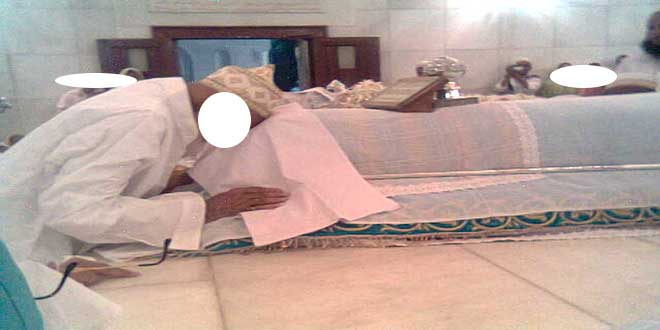 Islām and the Veneration of Graves and Annual Gatherings

For the Muslim to Ponder and Reflect

The history of the people of shirk and the Mushrikīn is a testimony that exaggerating their praise for their dead and venerating and respecting graves beyond the normal bounds was from amongst the major reasons they deviated.

The Corruption and Depravity in Making Graves into Shrines

Without a doubt the bodies of the deceased and their graves require a given level of decorum however, this does not mean they are venerated by building structures over their graves and turning them into shrines. Likewise, nor does it mean to give these graves and shrines the same status as the house of Allāh, in that it is obligatory to undertake long ardent journeys as part of the Dīn to visit it and recommended to visit the Prophets Masjid and there is certainly no evidence making it permissible to seek aid and assistance from the dead and thereby calling upon them and supplicating to them just as we do with Allāh.

The Origins of Idol and Grave Worship

It is shameful that in addition to all kinds of gross indecency and open sinning that takes place at such shrines and tombs, they are also venerated and idolised just as the Masajid are. They celebrate the birthdays fuelled with festivities at the graves and they also pray towards them as the Qiblah. They make tawaf of the graves and prostrate to them and in reality this is also idol worship which is shirk. This is the deplorable evil Islam came to eliminate and this is also the rot and foundation of idol worship. Ḥāfiẓ Ibn Qayyim said,

“Idol worship started with the veneration of the dead by making their pictures and by touching their graves and praying near them (ie their graves).” [Ighāthah al-Luhfān Fī Masāʾid al-Shayṭān [2:197]

Grave Worship is the Hallmark of the Jews and Christians

It is also known despite their claim of believing in the oneness of the creator the jews and christians became engrossed in this catastrophic calamity and became deeply embroiled in shirk ie polytheism. In this regard Allāhs wrath was upon them. The Messenger of Allāh (Sallalahu Alayhi Wasallam) said five days before his demise,

“Beware of those who preceded you (jews and christians) and used to take the graves of their Prophets and righteous men as places of worship, but you must not take graves as mosques; I forbid you to do that.” [Ṣaḥīḥ Muslim [1:210]

[Trans. Note] the full text of the hadith as narrated by Jundub (RadhiAllahu Anhu),

“I heard from the Messenger of Allāh (Sallalahu Alayhi Wasallam) five days before his death and he said: I stand acquitted before Allāh that I took any one of you as friend, for Allāh has taken me as His friend, as he took Ibrāhim as His friend. Had I taken any one of my Ummah as a friend, I would have taken Abū Bakr as a friend. Beware of those who preceded you and used to take the graves of their prophets and righteous men as places of worship, but you must not take graves as mosques; I forbid you to do that.” [Ṣaḥīḥ Muslim [no.532]

Annual Celebrations and Gatherings are the Root of Grave Worship

One of the forms of veneration is what has been mentioned in the previous ḥadīth, another form is what they practice in terms of the worship they conduct on their annual birthday celebrations and their days which they celebrate just as they celebrate Eiʿd day as. Shaikh al-Islām Ibn Taymiyyah said,

“As for making structures over graves and venerating them, is unlawful with Allah and his Messenger. It is also veneration to specify a specific time in order to visit these graves and to generally gather around them at a specific time is also a form of veneration celebrations.” [Iqtiḍā Ṣirāṭ al-Mustaqim [p.181]

“Eid is the title of a specific place, a place where there is intent to worship Allah by gathering there. For example Masjid al-Haram, Mina, Muzdalifah, Arafah which have been titled as Eid by Allah. Such are places where the people gather on specific days where they supplicate, make Zikr and offer sacrifice. The Mushrikin also had similar places or gatherings where they would accumulate and perform similar acts (or worship) but when Islam came it finished such acts. The graves of the Prophets and the righteous people also fall under this category.” (Iqtiḍā Ṣirāṭ al-Mustaqim (p.156)

Meaning the graves of the Prophets and the righteous people should not be made into places of gatherings or festivities.

Taqlid of the Hindu’s

“The habit and norm of the fire worshippers and the idol worshippers of Hindh is to establish a particular day to gather at a specific place to make celebrations. The pir worshippers have followed in their footstep and celebrate Eid Ghadir Kum or annual celebration at the grave of some holy person. They indulge in all kinds of luxuries and extravagance, thereby pleasing shaytan and upsetting the elders.” (Balagh al-Mubin (p.31)

He writes at another instance,

“From the major innovations is to make numerous fabrications concerning the affair of the grave and then to make them into places of festivities and gatherings.” (Tafhimat Ilahiyyah 2:64)