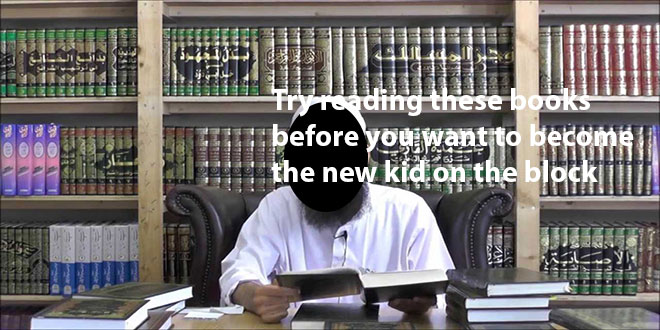 All praise be to Allah lord of the worlds to whom we praise and seek his aid and assistance without any intercessors. May there be abundant salutations upon the noblest messenger, his family, his companions and all those Muslims who follow until the last day.

Very recently some proponents and ardently staunch followers of the Hanafi Deobandi Madhab under the guise of the Hanafi Fiqh  have made some slanderous remarks which were based on bigoted ignorance, deliberate opposition of the true reality, state of affairs and malicious misrepresentation of the facts through social media platforms.

The perpetrator of these remarks were carried out by neonate, new kids on the block with new found levels of testosterone, namely Mohammad Yasir Al Hanafi. Our aim is not to entertain the mind-set of this individual or his scathing remarks as this will lengthen this brief response. Rather we wish to highlight some key points to show the slanderous lies and ignorance of this individual.

I also like to request our Sunni brothers to refrain from uploading any youtube videos, creating articles against the likes of the Hanafi and Deobandi sect including their overly exaggerated teachers such as Maulana Qasim Nanautwi, Ashraf Ali Thanvi and Rashid Ahmad Gangohi who are not well versed with this sect and their school of thought. The brothers should understand that attempting a refutation against the aforementioned individuals, the Deobandis and Hanafis will result in a subsequent response from them which may be difficult for those brothers to rebut and thereby causing embarrassment on behalf of Ahlus Sunnah Wal Jama’ah. It is indeed easy quoting what Ashraf Ali Thanvi said etc but when accusations are levied against us these brothers are no where to be seen.

The effects of this scenario will make our brothers look weak and defeated. In summary, it is very simple to upload videos which make criticism of the Deobandi Manhaj by our zealous brothers however any response from the opposition is met with silence. Therefore our brothers should realise their respective limits when dealing with such matters.

Let us proceed and analyse the confused statements of Mohammad Yasir Al Hanafi. He stated the following…

“Salafis” Who are very new to this ummah, maybe a hundred years or so, though they take many of their creed issues from Hafiz Ibn Taymiyyah, bin Baz, Uthaymin et al who were nowhere near the salaf.

Response: We do not know if we are to laugh at this statement or cry at the Jahala of this individual. Such statements have become so monotonous or repeated that it is deemed as ignorance to even raise such a point. This statement has demonstrated the childish and immature behaviour and pathetic mind-set of this person

If we are to accept his statement that the Salafis existed for no more than 100 years or so then consider the following.

Shaikh Muhammad Fakhir died in 1164H (approximately 272 years ago). He wrote in his refutation of the Ashari’s which mentions Allahs Kalam Nafsi (i.e. the incorrect Aqidah),

“(They say) Allah does not speak but they are internal sounds!!! Then you cannot even find the smell of this in the Quran and Sunnah” (Risalah Najatiyyah Dar Aqaid an-Hadithiyyah (also referred to as Athariyyah pg.21).

In light of this Mohammad Yasir has either demonstrated his poor mathematical skills or he has shown poor understanding of the Salafis and Ahlul Hadith. Shaikh Muhammad Fakhir died in 1164H refuting the Asharis but also the fact that he was a bona fide scholar of the Salafis.

It should be noted critically here that during this period Deoband was not even in existence and therefore we should redirect the statements of Muhammad Yasir on the forefathers of the Deobandi sect which did not exist over 100 years ago until the intervention of the British Empire through the East India Trading company.  (Refer to our treatise, The Deobandis & The British Government. At the following link http://www.salafiri.com/the-deobandis-the-british-government/)

It is clearly apparent from this short analysis that Mr Yasir is having a hard time grasping basic mathematics, books of the Salaf and History. What reliance can we have in his short outburst?

“Salafis”, who are very new to this ummah, maybe a hundred years or so”

in this case we him to consider the following.

“The Salafi, they are those who are attributed to the Salaf and following the Madhab of the Salaf, as I HAVE HEARD FROM THEM” (al-Insab 7/723)

If we accept Mr Yasir’s statement that the Salafi’s are a century old then please explain with your amazing mathematical mind, how Allamah Samani stated he heard from the Salaf that they followed the Madhab of the Salaf during the 6th century Hijri? And that Allamah Ibn Athir stated that he saw a group calling themselves Salafi during the 7th century Hijri?

It is well known to most people that the Salafi’s are the ones who adhere to the way of the Salaf and their Madhab and it is for this reason that we label ourselves as Salafis. We should emphasise here that being a prerequisite of being a Salafi is NOT to follow Shaikh Bin Baz, Shaikh ibn Uthaymin and Imam Ibn Taymiyyah.

Rather Allamah Safarini has explained that the later scholars who adopted the way of the companions, Tabieen and Taba Tabieen are known as the Salaf (Lawameh al-Anwar (1120).

Imam al-Ajurri superseded them in this and included Imam Ahmad and the scholars of his era from amongst the Salaf (ash-Shariah (p.14)

In light of this, the intelligent reader will acknowledge with certainty that we take our creed issues

from Imam Bukhari (256H)  his book of Tawhid and Iman from Sahih al-Bukhari and his Khalq Afa’al al-Ibad.

and the creed of the Salaf from Imam Sufyan, the two Hammads,

In light of this, the slanderous accusations highlighting that we take our matters of creed from the likes of Shaikh Bin Baz, Shaikh Ibn al-Uthaymin and Imam Ibn Taymiyyah is a disgraceful and fabricated lie. One would contemplate as to where does Mr Yasir take his issues of creed from?

Does he take them from his Imam Abu Mansur al-Maturidi or the Ashaa’irah? Further to this, one would ask to what extent did the former of these individuals understood their creed with respect to the Salaf. Mr Yasir labels himself as an Ashari but yet he has not been able to substantiate the origins of his Aqidah, whether this be early or late Ashari or the Kullabiyyah. Furthermore, your Deobandi Church forefathers have stated in their respective books such as Maulana Khalil Ahmad Saharanpuri, Qari Tayyab and Maulana Yusuf Binnori that they adopt and follow the Aqidah of Abu Hasan al-Ashari and Abu Mansur al-Maturidi however they choose to follow Imam Abu Hanifah (Rahimahullah) in fiqh.

It is difficult to fathom as to how Mr Yasir chooses to follow a diluted Aqidah and yet have the audacity to claim that the Manhaj of Ahlul Hadith is no more than 100 years old. An intelligent student of knowledge would come to terms with the fallacy and fictitious nature of My Yasir’s baseless statements and his corrupted diluted Madhab.

At the very least he could have adopted the Aqidah of Imam Abu Hanifah as cited in Fiqh ul-Akbar or in his Wasiyyah Al-Imam Abu Hanifah. It is clear that Mr Yasir evidently has no shame in labelling himself as a Hanafi whilst he follows the Aqidah of his Deobandi forefathers. So either deny the attribution of these books to Imam Abu Hanifah and the Aqidah contained therein or accept the words of your own Imam, the same Imam you spend your lives defending his fiqh and yet on the other hand you turn a blind eye to his beliefs, this is the most hypocritical manipulation of the worst dimension.

We therefore stress that he should spend some useful time in reading Imam Abu Hanifah’s Aqidah in Wasiyah (p.38) (We would be surprised to say the least if he has even heard of this book) or Imam Abul Hasan al-Ashari’s Al-Ibanah (p.55). In light of these references we would expect Mr Yasir to revert to making claims that Imam Abul Hasan Al-Ashari’s Al-Ibanah has been tampered when he fails to provide an educated response.

He further states in his allegations

“Also the fact that in this country they have hardly any proper madaris, except for a few crash course “Halaqas””

This is a further lie, the Salafis and Ahlul Hadith have been teaching in their respective madrassahs for years well before Bury and Dewsbury appeared on the scene. Madrassah’s were and are well established throughout the United Kingdom with names like Madrassah Salafiyyah. We would surely know as we studied in them in the early 80’s and the teaching was regular and consistent from the mid 70’s.

The level and methods of teaching were evident and widespread where students would deliver lectures and sermons as training in the annual conferences. The evidence is in your face yet due to his vehement bigoted and staunch animosity for the Ahlul Hadith he is so blind to the truth when it is right in front of him and even if it was to slap him in the face, he would still be upon his farcical and slanderous absurdities. The videos are on Youtube, may be when he has time from his repugnancy he might have a look!!! All this when deoband was still in deoband on paper!!!

Also a JazakAllah Khair to Abu Hashim for his diligence and efforts.

Written by the two weak slaves of Allah